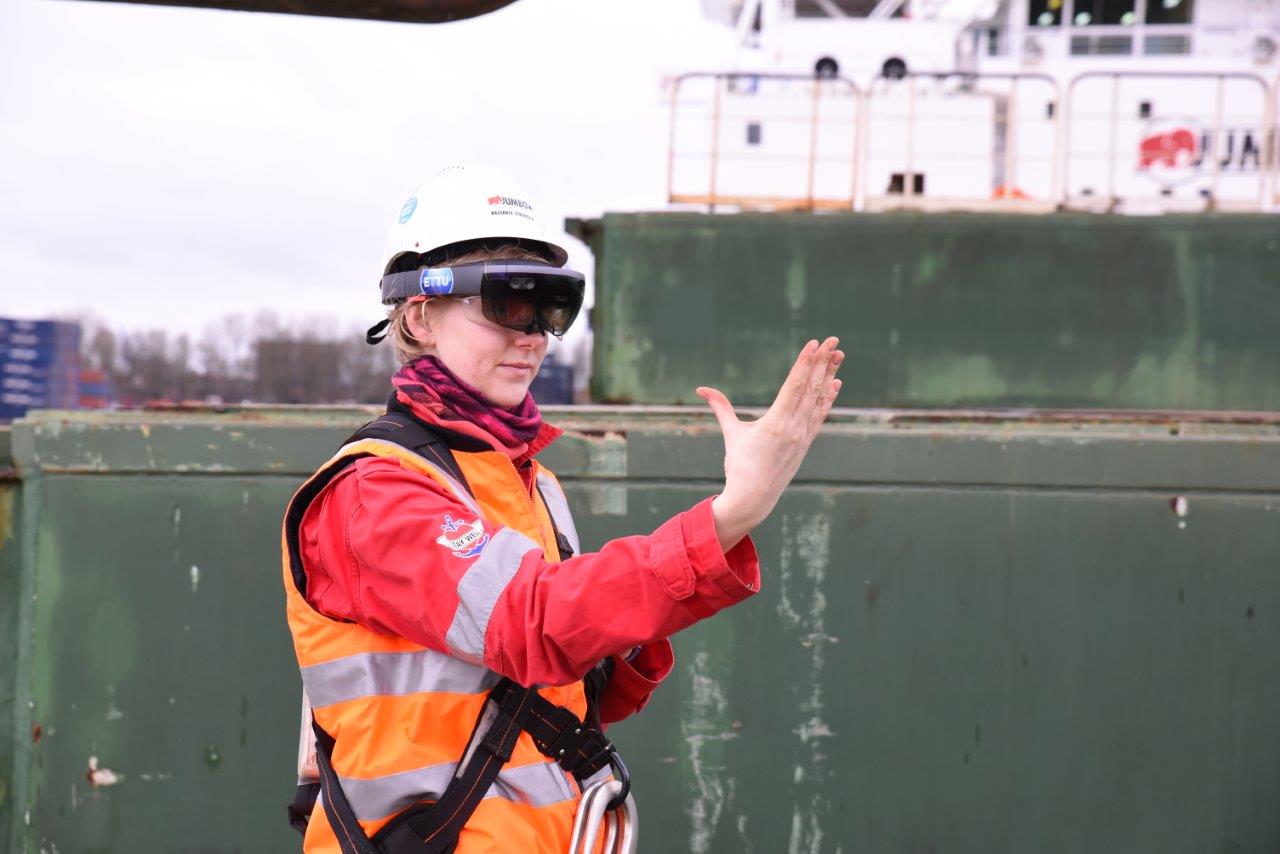 Jumbo has completed the first of two contracts supporting Subsea 7 projects for Total in Angola. For the first time, Jumbo has used augmented reality for shimming points. Using HOLO Lens, the precise positioning of 156 different points on the deck took just two hours.

Combining the multiple characteristics of shallow draught, global coverage, extensive lifting and loading capacity, Jumbo is mobilising the Fairlane and the Jumbo Vision – two of its H800 Class vessels – to complete the contracts.

Jumbo Vision carried out the first campaign, called CLOV MPP, by picking up an empty 24-metre diameter carousel from Subsea 7’s headquarters in Dusavik, Norway. The H800 Class vessel then sailed to Halden, Norway, to load a substantial length of subsea umbilical, the carousel and umbilical having a combined weight of 1255 tonnes. The load also comprised numerous auxiliary equipment, including a level winder, tensioners and workshop equipment.

In preparation for loading such a heavy carousel, Jumbo’s engineering works started with a comprehensive FEM (Finite Element Method) analysis. The purpose of this was to provide an overall assurance of safe loading and transport.

The engineering work continued with a shim plan to spread the load of the carousel evenly across the Jumbo Vision’s deck. Shimming is accomplished by levelling up sections of the deck with steel plates of varying thicknesses, thus preventing any deflections during transport.

With the shim plan requiring the precise positioning of 156 different points on the deck, Jumbo used its augmented reality (AR) HOLO lens. ‘This is a system that we have been developing and testing for some time – and we are proud to say that this is the first time we have used it for a client,’ says Jumbo Project Manager Tijmen Bregt.

Jumbo’s HOLO system uses AR software and AR glasses to locate predetermined positions with pinpoint precision. ‘Compared to carrying out this prep work manually, using our own AR technology is not only more accurate, it is also much faster,’ he explains. The increase in efficiency is illustrated in the time taken to locate the 156 shim points. ‘Using the HOLO system, our engineer was finished in about two hours, compared to one whole day using traditional methods.’ Also see the video below.

After loading and sea-fastening, the Jumbo Vision returned to Dusavik, where the umbilical and equipment were trans-spooled and transferred to Subsea 7’s offshore construction vessel Seven Arctic.

Reels from Denmark to Angola

Jumbo’s second contract, which started early October, is supporting Subsea 7’s work on Total’s Zinia Phase 2. For this, the Fairlane will transport ten loaded flexible reels from Denmark to Luanda, Angola. These reels will be of various diameters and weigh in at 2080 tonnes.

Once in Angola, the Fairlane will be on standby to supply reels consecutively to the Seven Arctic as it carries out its EPIC campaign 150 km off the coast of Angola. Once all the flexibles have been installed, Jumbo will return all the empty reels and equipment back to Denmark.

‘Our H800 Class vessels like the Jumbo Vision and the Fairlane are perfect for these two projects,’ says Guy Foubert, Jumbo Shipping Regional Commercial Manager. ‘They have the shallow draught and manoeuvrability to easily handle a pickup in a confined port like Halden. Then in Angola, seeing that EPIC companies prefer to have a smaller ship supporting their larger offshore ship, the Fairlane is ideal for ship-to-ship transfers of flexible reels. There is close cooperation between the Subsea 7 and Jumbo teams working on these contracts – and we are coordinating every step to match their targets exactly.’