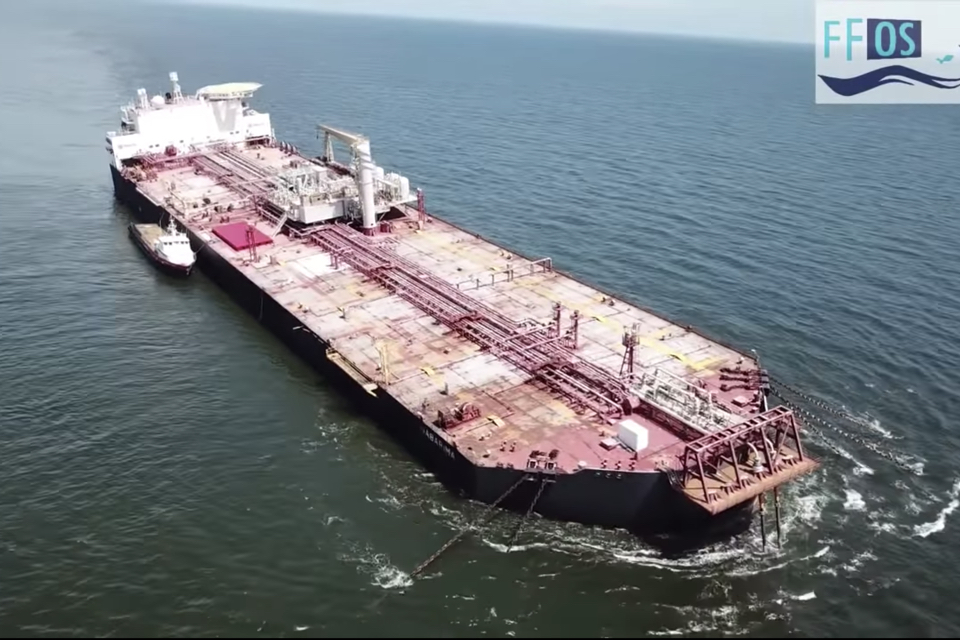 A team of experts of the government of Trinidad and Tobago has visited the FSO Nabarima to assess its condition. Venezuelan officials explained to them the reasons for its listing in September and the team has concluded the vessel is now stable.

On 17 October, NGO Fishermen and Friends of the Seas (FFOS) reported the FSO was listing and at risk of capsizing. Several media also reported water ingress and oil spills. With the ship just 17 miles west of territorial waters of Trinidad and Tobago in the Gulf of Para, the Trinidad and Tobago government requested permission to visit the ship and assess the situation.

Initially a fly by was requested, but this was denied by Venezuela. Finally a team of experts would be allowed to visit the site on 28 September, but this was cancelled by the Venezuelan authorities and postponed to 20 October. Last week, the team did visit the ship.

According to Minister of Energy and Energy Industries Franklin Khan a team of 3 experts flew to the FSO Nabarima by helicopter. They first flew around the ship and ascertained the ship was once again horizontal, which allowed the helicopter to land on the ship’s helicopter pad. Khan: ‘The helicopter would not have been able to land if the vessel had still been listing.’

The team was met on board by Venezuelan officials as well as the crew and captain and spent 3.5 hours on board. After tours of the engine room, tank control room, bilge tanks and other relevant areas, the team concluded maintenance of the vessel was satisfactory.

Minister Khan also said the Venezuelan representatives were very open on what caused the vessel to list in the first place: ‘In September, there was a loss of stability with a negative trim of 3.5 metres and a 7-degree list to the starboard side due to failure of the ballast system valves.’ Since then, repairs have been carried out to remedy this situation.

‘Secondly, the reported water ingress occurred in the bilge in the fourth deck of the engine room due to valve failure associated with the bottom suction and emergency bilge draining system,’ adds Khan. ‘The flooding of the engine room led to some catastrophic failure of a number of electrical units. This took place early September and has been rectified since then.’

Conclusions of the experts

Khan says the team could conclude the following after their visit: ‘First, the FSO Nabarima is upright and stable with no visible tilt and there is no imminent risk of tilting or sinking at this time. Secondly, there was no water ingress visible on the vessel during the team’s visit. And third: it was confirmed that during the incident when the engine room was flooded, there was no mixing of oil and bilge water and the oil did not leak from the containment tanks.’

They have also concluded that the oil spill response plan is an acceptable document. Khan adds: ‘The anchorage system was designed to withstand the most severe weather events associated with the region, that is, hurricanes. All in all, the team was happy. There was no tilt, the ship was not taking in water and all operating systems were functioning acceptably.’

The team has also confirmed that the Venezuelans have started to offload the vessel. ‘What is happening as we speak is that the crude oil is pumped from FSO Nabarima into a barge, which takes it to the tanker Icaro,’ says Minister Khan. ‘This tanker falls under US sanctions, which means the tanker cannot leave Venezuelan waters. This means they are moving the oil from the Nabarima into another location in Venezuela, very likely onshore.’

‘The only challenge we saw with that is that the vessels involved have such a small capacity (the barge 30,000 barrels and the Icaro of 300,000 barrels),’ Khan states. ‘This means it will take a long time to empty the vessel, about 35 days. While the process of emptying the vessel is safe, the extended period of time over which this activity will be taking place, will cause some sort of challenge that we need to monitor. In that context, we have asked the Venezuelan government to use larger vessels to offload the Nabarima’s cargo, but this of course depends on the resources they have available.’

The government of Trinidad and Tobago has also requested the Venezuelan authorities to allow a technical team to revisit the vessel in a month’s time, but it is as yet unclear if this request will be acceded to.

The FSO Nabarima is used to store oil and is owned by Venezuelan state oil company PDVSA. Before offloading began, it had about 1.3 million barrels of oil on board.

Picture: The FSO Nabarima is listing off the coast of Venezuela (video still from video above by Fishermen and Friends of the Sea).