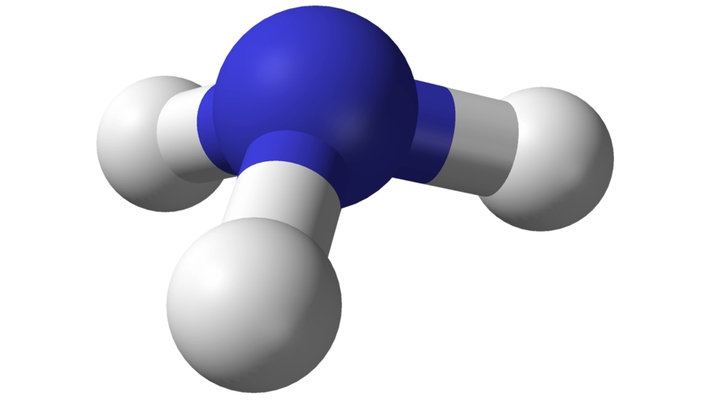 Ammonia as a fuel could be a prime candidate to reduce shipping’s emissions by 2050. However, there are some challenges, not least the USD 4.5 trillion investment Hendrik Brinks, Principal Researcher DNV GL – Maritime, says are needed to produce enough green ammonia to supply shipping.

The IMO goal for 2050 is a 70 per cent lower emission intensity and 50 per cent lower overall emissions compared to 2008. Technical and operational measures will not be enough to reach the IMO 2050 goal, which means alternative fuels will be necessary.

‘Ammonia does not contain carbon and does not release CO2 upon combustion,’ says Brinks at DNV GL’s “Alternative Fuels Online Conference”, which took place on 15 October. ‘When ammonia is combusted, the resulting products are water and nitrogen gas. When ammonia is also produced without involving CO2, then it could be completely emission free.’ Brinks explains the difference between brown, green and blue ammonia. ‘The brown ammonia used today is created from fossil sources like natural gas and coal. Green or E-ammonia is based on renewable electricity and in the middle we have blue ammonia, which is based on fossil sources with carbon capture and storage (CCS).’

‘If we look at the different options of how to make a fuel completely emissions free on a well-to-wake basis, there are actually relatively few options,’ says Brinks. ‘It is the lack of good alternatives that makes ammonia one of the better options.’

‘The options that we have, are nuclear propulsion (not accepted by society), fossil fuels with on board CCS, but then we need infrastructure in the ports and storage facilities. Then we have synthetic energy carriers not containing carbon, in particular hydrogen and ammonia. Hydrogen is challenging to store and expensive with a fuel cell. Yet, the drawback with ammonia is that it is toxic. The fourth option is to have energy-carriers containing carbon-neutral carbon, typically based on bio or waste.’

Of course, there are some pros and cons. Brinks: ‘There are some challenges with the combustion of ammonia. It has a narrow flammability limit (15-28%), low flame speed, a high autoignition temperature (630 degrees Celsius) and high heat of evaporation. The pros are low air consumption and expansion during combustion, which means that the power density is the same as oil based fuels.’

Ammonia for shipping needs to be green or blue

Ammonia production globally amounts to about 170 million tonnes per year. That corresponds to about 25 per cent of the demand for shipping, explains Brinks. ’80 per cent of ammonia is used for fertilisers, so for the current production of brown ammonia, fuel consumption would compete with food production. In addition, brown ammonia would yield no significant CO2 reductions.’

This means new production capacity of either green or blue ammonia will be necessary. To produce green ammonia from renewable energy such as wind and solar PV, the major cost stems from the electrolysis process, states Brinks.

Currently no OPEX or CAPEX benefits

Last year, ammonia cost about USD 300/tonne on average, which corresponds to the price of VLSFO at the end of 2019, according to Brinks. Brinks: ‘This means that there currently are no OPEX benefits to switch to ammonia. But there is an increased CAPEX, there are some risks related to toxicity and no reduced GHG emissions by using brown ammonia. So, currently there are no good reasons to switch to ammonia, but this will be different in the future.’

Currently there are no good reasons to switch to ammonia, but this will be different in the future

Cost of renewable electricity has decreased over the past years and Brinks expects green ammonia will be more competitive to blue ammonia in the future.

Brinks explains: ‘A benefit of ammonia is that it is to a large degree scalable. It can be produced from water, air and renewable electricity. And it is possible for example to build new capacity. To produce enough ammonia for shipping worldwide, would require a production facility measuring 300 km2. So it is possible to produce enough green ammonia (650 million tonnes). This would require 6500 TWh, similar to China’s entire electricity production today. So the scale is large.’

‘In terms of investment, the electricity production would cost about USD 3.2 trillion (if it was wind power) and the ammonia plants about USD 1.3 trillion,’ Brinks continues. ‘So, in total, USD 4.5 trillion in investments, just to produce the ammonia. This excludes the needed infrastructure, newbuilds and retrofits.’ Despite these large numbers, Brinks says ammonia can potentially be important in decarbonising deep-sea shipping as it could be a fully emission free option. Using ammonia however, would require appropriate safety barriers because of its toxicity and corrosiveness. He also says that the ‘production capacity of ammonia (blue/green) has to be increased and the cost of green ammonia is a barrier. This has to be alleviated either by taxes or regulations in the short term before green ammonia will be able to compete.’

The different technology options to run a ship on ammonia are under development. Brinks points out ammonia research projects currently under way, such as MAN’s dual-fuel 2-stroke internal combustion engine, capable of running on ammonia. ‘Tests are yet to be carried out to optimise combustion and check for NOx, N2O and NH3 slip. It will be a dual-fuel engine that can switch back to an oil-based fuel.’

At the same time, Wärtsilä is researching 4-stroke ammonia engines. Brinks: ‘It is likely both engine types will need selective catalytic reduction (SCR).’

There is also a research project on converting an offshore supply vessel to run with a 2 MW solid oxide fuel cell (SOFC) as one of the four engines. ‘It is also possible to use a proton-exchange membrane (PEM) fuel cell after cracking ammonia, but that would require purification of the hydrogen as it could poison the PEM,’ Brinks adds.

Comparison to other competitors

Ammonia is often listed as a potential fuel along with methanol and hydrogen. Brinks was asked to list ammonia’s benefits compared to these 2: ‘Ammonia production is easier to scale up than hydrogen. In addition, with liquid hydrogen, 30-40 per cent of the energy is lost during the cooling. Future advantages of ammonia over methanol will be that the costs will be a little bit lower. In addition, conversion from hydrogen to ammonia is about 15 per cent more energy efficient than from hydrogen to methanol.’