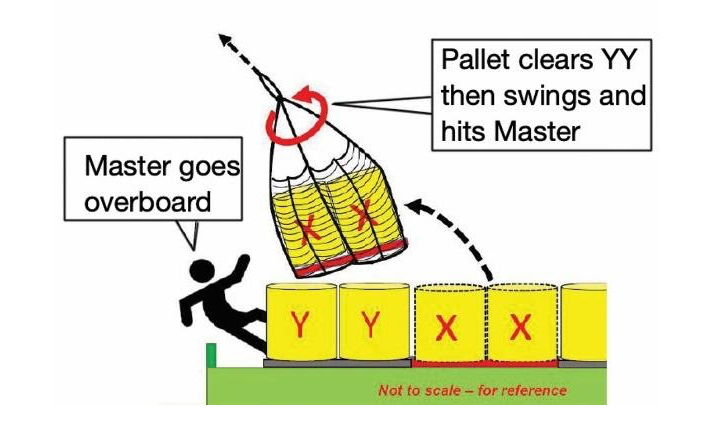 The master of a supply boat has died after being knocked over board by a swinging load. The Nautical Institute discusses the incident in a Mars Report and points out some of the contributory ‘questionable decisions’. One of these was the master of the supply boat leaving the wheelhouse unattended during the cargo transfer.

A chemical tanker planned to take on stores while underway via a small re-supply boat. The weather was fine with a slight sea and swell and light winds.

The masters of the two vessels had agreed a rendezvous point and to undertake the ship-to-ship transfer operation on a heading of about 305° and at a speed of about four to five knots. The tanker’s crane would be used to bring the stores on board. The re-supply boat came alongside the tanker and, without any lines attached, the tanker’s crane’s hook was lowered and the first pallet (XX in the diagram) was hooked on and the lift started.

Before the lift could be lowered to the deck, it came free from the YY pallet, swinging toward the tanker and knocking the master overboard. Life buoys were thrown to the master, but he was unable to reach any of them. Search and rescue operations were initiated, but the master was not found. His body was recovered four days later.

The investigation found, among other things, that neither the deck crew nor the master were wearing personal flotation devices, even though the gunwale was only 0.5 metres high meaning there was a considerable risk of falling overboard.

This accident was covered in the Mars Reports, originally published as Mars 202046, that are part of Report Number 334. A selection of this Report has also been published in SWZ|Maritime’s September 2020 issue. The Nautical Institute compiles these reports to help prevent maritime accidents. That is why they are also published on SWZ|Maritime’s website.