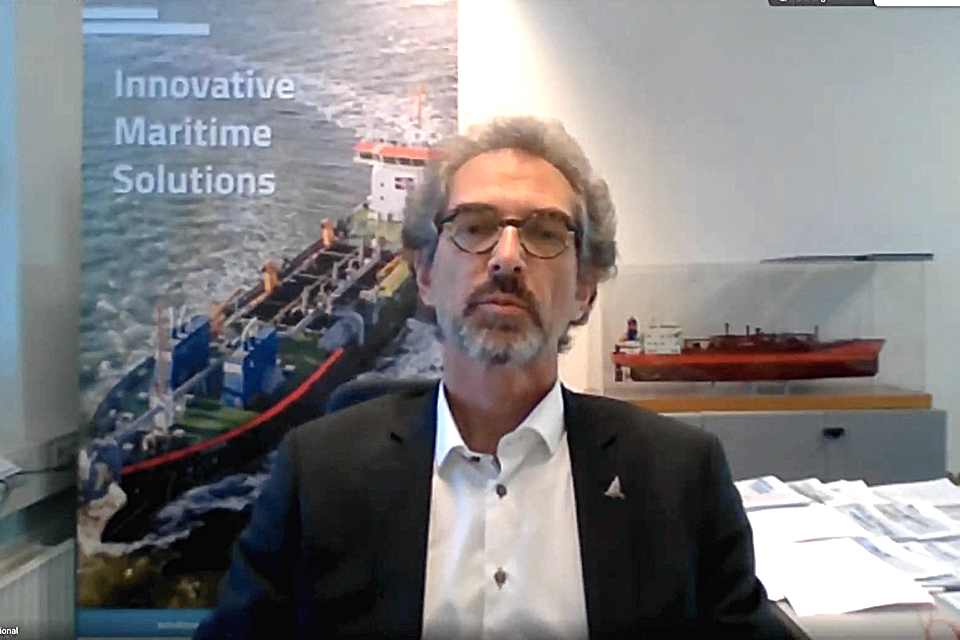 Less than 3 tonnes of fuel per day has become the new normal for short sea shipping according to Guus van der Bles, Director Development at Conoship International. Yet, shipping needs to become cleaner still. He sees a key role for both wind assisted propulsion and carbon capture on board to achieve this.

Van der Bles: ‘At Conoship, for our ship designs we focus on a combination of economy and ecology. We have set out 5 steps to reduce emissions. In the first step we look at the hull design, in which we always focus on the lowest resistance. In the second step, we focus on the propulsor with a large diameter propeller and optimisation of propulsive efficiency. Which is not always behind the hull with the lowest resistance. There is a trade-off in optimisation between the two here.’

To align the first two steps, Conoship makes use of Computational Fluid Dynamics (CFD). ‘We work on an integrated CFD optimisation of hull lines, propeller design, nozzle design and rudder design. And the results of this were quite astonishing,’ adds Van der Bless. ‘For the Lady Anna series, which has a service speed of about 10 knots with 300-3500 tonnes of cargo at average power of below 700 kW, the fuel consumption is less than 3 tonnes/day. This is sometimes 30-40 per cent less than its competitors. And it keeps thrust in heavy seaways. So far, 20 vessels of this series have been built. It also shows that using less than 3 tonnes of fuel per day has become the new normal for short sea shipping.’

Van der Bles is an advocate of wind-assisted propulsion: ‘Just use the wind that is freely available. Apply the largest auxiliary wind propulsors that do not impede vessel operations.’

Conoship then came to its design of the eConowind unit, which is based on the Turbovoile principle of Jacques Cousteau and took some nine years to develop. Van der Bles explains: ‘We were looking for a compact wind propulsor that could be retrofitted and integrated into new designs. Boundary layer suction is the eConowind unit’s big trick, which increases the delivered thrust by a factor 4 to 5 compared to when there was no boundary layer suction.’

‘The nice thing, is that you can put it in a container so it can easily be placed on deck,’ adds Van der Bles. ‘First fuel savings of the system reported in 2018 were 8 per cent with just 1 unit on board. The MV Ankie now has two 10-metre Ventifoils on deck, which will be extended to 16 metres later this year. This will result in fuel savings of up to 20 per cent in Bft 5, and up to 8 per cent as an annual average on the Baltic and North Sea. The future as we see it, will be a combination of wind energy and an electric propulsion system.’

For Wijnie Barends, Conoship designed cargo ships running on LNG. Van der Bles: ‘It was quite a trick to get the big tank in. Conoship researched LNG for 7 years. Last year, 2 series of LNG fuelled dry cargo ships were designed for the Baltic Sea. However, while LNG is good for reducing SOx, NOx and PM emissions, there are still CO2 emissions. So, we started an R&D project on capturing CO2 on board of LNG driven vessels.’

According to Van der Bles, the exhaust gases of LNG powered vessels are relatively clean, which is big advantage in capturing the CO2 from it. ‘The capture of CO2 is a proven land-based technology and relatively simple. The focus was on applying this known technology on a vessel and to know its effects on seize, weight and roll/pitch movements. To store the CO2 on board, you can cool it down with LNG and liquify it. CO2 is liquid at -20 degrees Celsius @ 20 bar, while LNG is on board at -162 degrees. So it’s a big heat balance optimisation.’

‘The nice thing for the future is that you can create a closed carbon loop with this,’ states the Conoship Director. ‘LNG is about 85 per cent methane. The CO2 that is captured on board can be sold as feedstock to producers of synthetic E-fuels, such as synthetic methane, which can then be used to fuel the vessel again. This makes the vessel CO2 neutral.’

Ultimate goal of course is to get to zero-emission shipping. Van der Bles states this will still take a lot of R&D as many of the solutions needed will still need to be developed (further). In addition to wind-assisted propulsion, his vision for after 2024 also includes a role for hydrogen fuel cells. How he sees this future is best explained by the following two pictures. Van der Bles presented his views on the future of ever more efficient ship design during the Project Cargo Summit, which took place on 23 and 24 September in Rotterdam.