The sea battle of Artemision | Part 2 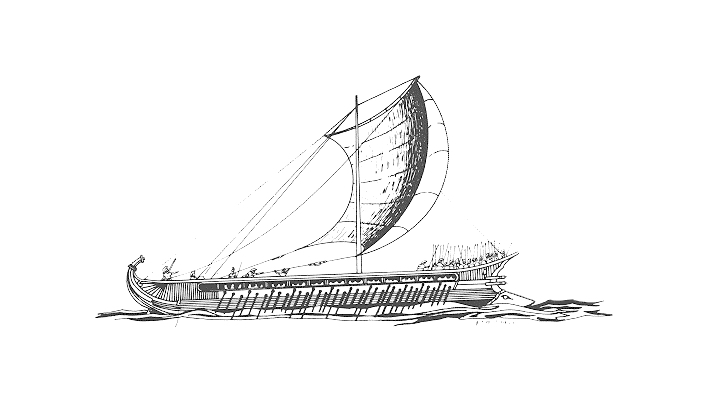 The KNVTS has a proud tradition to connect its vision on the future with a view on the historic past of shipbuilding practice. Time for the chair of the KNVTS Ship of the Year Committee Rien de Meij to take a step back and reflect on the idea of “vision”. Here is part II of the story of “The sea battle of Artemision”.

In the period of about 600-480 BCE, Ionian colonists emigrated from Attica to the Aegean coast of Asia Minor, which is modern Turkey. There, they inhabited a narrow coastal strip from Phocaea in the north, to Miletus in the south, including the islands of Chios and Samos. [Note: In this narrative, Samos’ role is the transitional stopover, the pivotal point, between Ionia and Hellas.]

Persia, in c. 540 BCE, conquered the cities of this area and appointed native tyrants to rule for them. In 494 BCE, they grouped a fleet that was manned by Phoenicians, Egyptians, Cyprians and Cilicians. With this diverse fleet they took courage for the First Persian invasion of Greece (492-490 BCE), a long story which ended with the decisive victory of the Greeks at Marathon [Machē tou Marathōnos].

When the news of the Greek victory at Marathon (490 BCE) came to the Persian king Darius the Great, he decided to take revenge and he sent heralds to Hellas, demanding “earth and water” – the usual token of submission – which he received from many cities of Greece (Herodotus, The Histories 7.131.1). He instructed Ionia and the islands to build ships and to enroll their best men for service against Hellas. King Darius died in October 486 BCE and the royal power then descended to his son Xerxes.

[Note: Xerxes was born in the royal Persian family around 518 BCE, to the king of Persia, Darius I and his wife Atossa. His mother was the daughter of Cyrus the great, which played a big role in his coronation as the king, despite not being the eldest son of Darius.]

By 483 BCE, Xerxes arrived on the mainland of Greece, in Thrace, both by land and by sea.

The Greeks had prepared themselves for the Persian invasion by forming the Hellenic League. Sparta and Athens both took leading roles in joining together 70 of the 700 city-states, many of which were still technically at war with each other. They were planning to stop the Persians that came by land at the narrow pass of Thermopylae. To prevent the Persians bypassing Thermopylae by sea, the Athenian and Allied navies planned to block the straits of Artemision. The southern shore of this strait, on the northwest coast of Euboea, is a promontory, which took its name from the ancient sanctuary of Artemis Proseoia.

The battles of Thermopylae and Artemision, 480 BCE.

After having crossed the Hellespont in the year 480 BCE, his fleet proceeded towards Central Greece, at first following the coastline of Thrace towards the Macedonian city of Therma.

[Note: The peninsula of Athos was on the invasion route of Xerxes, who spent three years excavating the Xerxes Canal across the isthmus to allow the passage of his invasion fleet. Warry, J. 1998 Warfare in the Classical World p. 35.] [Note: The city of Therma derived her name from the Greek thérmē/thérma; “(malarial) fever”. Therma was later restored and renamed Thessalonica by King Cassander of Macedon (315 BCE).]

After that they navigated along the mountainous coast of Magnesia. The Persian armada advanced slowly, taking regular stops to pull their ships ashore, to dewater them, to dry the leaky hulls and to resupply them with food and water. Fleet and army could only operate in close conjunction of each other, moving along the coast and taking city after city.

The season, however, was not favourable to them, and while at anchor in the shallow waters off Mount Pelion, the fleet was hit by a “tempest” and partly shattered even before the battle even began. [Note: Mount Pelion took its name from the mythical king Peleus, father of Achilles. Furthermore, it is said that Jason built the Argo at the foot of Mount Pelion.]

The remainder of the Persian fleet, which initially numbered 1207 triremes, continued their journey south, aiming to find refuge in the bay of Aphetae. [Note: The Persian Fleet numbered 1,207 warships, of which 207 were “fast” ships. Aeschylus, The Persians, Herodotus The Histories 7.89.]

By then, the Greek allies had safely beached their ships at the headland of Artemision, ready to quickly launch them when needed. However, even after fourteen days, the Persian fleet had not shown up and the Greek allies decided to sail to Chalcis, halfway down on the western coast of Euboea. Around ten days later, the Persian land army arrived at Thermopylae, choosing not to attack, but to wait for the Persian fleet to arrive. After the arrival of the Persian Fleet, they were expected to enter the Gulf of Euboea and to overrun the villages on the coast of Euboea.

‘But the Greeks, when the signal was given them, first drew the sterns of their ships together, their prows turned towards the foreigners; then at the second signal they put their hands to the work, despite the fact that they were hemmed in within a narrow space and were fighting face-to-face’.

[Note: The kýklos is a naval tactic in which a fleet would defend itself by forming a circular formation with their rams out and sterns inward. The formation carried the potential for a concentrated counter-attack against a fleet of enemies. A variant was the half-circle, or moon-shaped formation, mēnoeidēs kýklos.]

‘… They fought that sea-fight with doubtful issue, and nightfall ended the battle; the Greeks sailed back to Artemision, and the barbarians to Aphetae, after faring far below their hopes in the fight.’

‘When darkness came on, the season being then midsummer, there was abundance of rain all through the night and violent thunderings from Pelion. The dead and the wrecks were driven towards Aphetae, where they were entangled with the prows of the Persian ships and jumbled the blades of the oars. [Note: The word platē refers to the blade of the oar. The word kōpē refers to the handle of the oar (or of a sword or of a key). Pliny the Elder, Natural History 7.235.]

‘The ships crews who were there were dismayed by the noise of this, and considering their present bad state, expected utter destruction; for before they had recovered from the shipwreck and the storm off Pelion, they next endured a stubborn sea-fight, and after the sea-fight, rushing rain and mighty torrents pouring seaward and violent thunderings’ (Herodotus, The Histories 8.11–8.12).

The intent of the Athenian commander Themistoklẽs was to delay the Persians, while the island of Euboea and Attica were being evacuated and the defense of the isthmus being prepared (Jameson, M. 1960, A decree of Themistoklẽs from Troizen). The Persians then sent a detachment of 200 ships around the southern extremity of Euboea, hoping to isolate the Greeks in the straits. A Persian defector, the diver [arneutér] Skyllias, dove into the sea at Aphetae and swam – underwater – to Artemision, to warn the Greeks against this plan.

[Note: The defector was one Skyllias, a man of Scione; “he was the best diver of the time, and in the shipwreck at Pelion he had saved for the Persians much of their possessions and gotten much for himself in addition; this Skyllias had before now, it would seem, intended to desert to the Greeks, but he never had had so fair an occasion as now. By what means he did at last make his way to the Greeks, I cannot with exactness say. If the story is true, it is marvelous indeed, for it is said that he dove into the sea at Aphetae and never rose to the surface till he came to Artemision”. Herodotus 8.8.]

[Note: In Homeric poetry divers occur in similia only: arneutéri eoikós, “like-a-diver”. When the helmsman of Odysseus is hit by a falling mast, he falls overboard “like- a-diver”. When Ajax strikes Epikeles with a rock, this Trojan falls off the Achaean wall “like-a-diver”. Homeric Odyssey 12.413, Iliad 12.385, 16.743.] A Greek squadron then sailed out towards Aphetae, to meet the Persians ships. Consequently, the Persians dispatched several ships to intercept the Greeks. The Greek triremes surrounded these ships, and even though they were in the minority, they were able to defeat them, with the help of the rams on the bow of their ships. Thirty Persian ships were captured.

The Persian fleet retreated for the night, and all the 200 Persian ships that were still en route to Euboea were destroyed in a sudden violent storm that same night. The next day, another fifty-three Athenian ships arrived, and a Greek surprise attack destroyed some Persian reconnaissance ships. The two sides fought all day, with roughly equal losses; however, the smaller Allied fleet could not afford the losses.

The next day, the Persians sailed towards the Greek fleet in the form of a semi-circle [mēnoeidēs kýklos] in an effort to enclose them off the coast of Artemision. [Note: A variant of the kýklos, a naval tactic in which a fleet would defend itself by forming a circular formation, with their rams out and stern inwards, was the half-circle, or moon-shaped formation, called mēnoeidēs kýklos.]

Here, however, the size of the Persian fleet was against them, as they were unable to maneuver in the straits and a large part of the fleet was destroyed by the Greeks. Five Greek ships were imprisoned by the Egyptian contingent, while the Athenian Cleinias, the father of Alkibiades, sank a large number of Persian ships. Much later, the Athenians, attributing the North wind, Boreas, with destroying part of the Persian fleet at Artemision, would built a temple for him. [Note: Boreas was also significant due to Athenian interest in Thrace’s strategic importance on the trade route to the Black Sea and its impact on Athenian grain, lumber, and mineral supplies.]

After these sea battles, the news broke through that King Leonidas I of Sparta was defeated at Thermopylae, after which the Allies decided to withdraw their ships to Salamis.

While the Greeks retreated from Artemision, the Persian marines lost time and energy by going ashore in the shallow muddy water at Thermopylae, to join the land forces in festivity and looting. [Note: “Thermopylae” means “hot gates”. The river is hot and rich of Sulphur springs since the day that Hēraklēs jumped into it, to clear himself off the Hydra poison infused into his cloak.]

[Note: ‘Men of our allies, King Xerxes permits any one of you who should so desire to leave his place and come to see how he fights against those foolish men who thought they could overcome the king’s power,’ Herodotus, The Histories 8.24.]

After that, they moved on to Phocis and Boeotia, leaving great devastation in their wake. Eventually they went into Attica where they captured Athens, which had been evacuated. Also the Persian armada moved southward, for the final stroke which would become known as the sea battle of Salamis.

This story could only be formed thanks to the support of the online community for Classical Studies of The Center for Hellenic Studies, Harvard University. The story was earlier published under a Creative Commons Attribution-NonCommercial-NoDerivs 3.0 Unported license at https://kosmossociety.chs.harvard.edu/?p=40457. The images have been selected from pictures that are freely available with open source or Creative Commons licenses:

This is the eighth in a series of articles written by Rien de Meij. An abbreviated version of this article was published in SWZ|Maritime’s September 2020 issue. The other articles are: