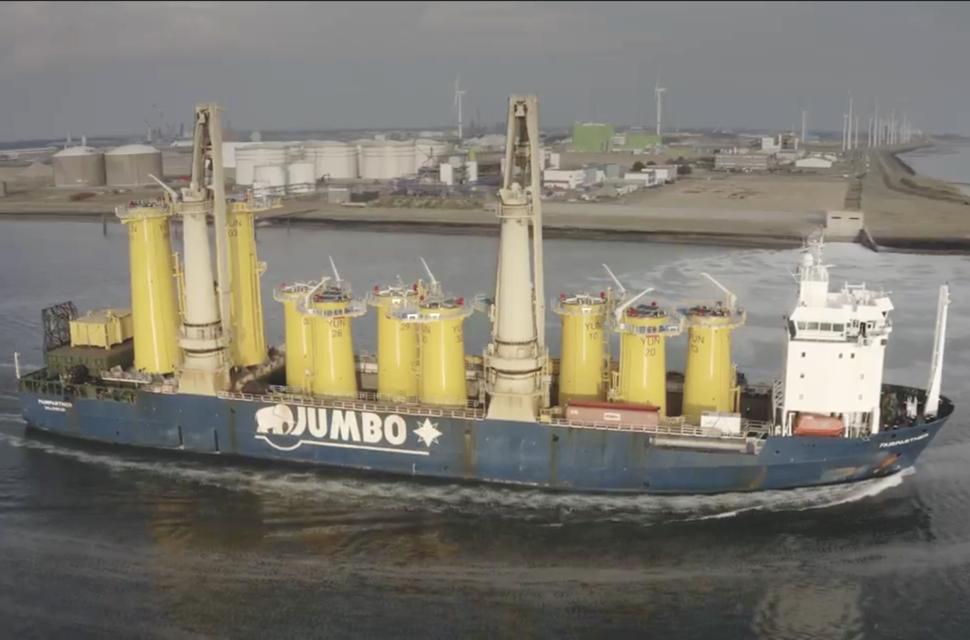 Yunlin Offshore Wind Farm in Taiwan is set to feature 80 Siemens Gamesa 8-MW turbines. Among other things, Jumbo has been hired to transport 40 transition pieces. The first 10 have now been loaded onto its heavy lift vessel Fairpartner.

The transition pieces were loaded in Vlissingen, the Netherlands. The Fairpartner is now on its way to Taiwan. According to Jumbo’s Communications Manager Jan-Hein Reeringh, there are only a few heavy lift vessels in the world that can handle 10 transition pieces in their hold/on their deck.

‘Some say even just 8 ships, that is: 4x Jumbo J-class, 2x Jumbo K-class and 2 BigLift vessels. At first, I found this hard to believe, but it turned out that most other heavy cargo carriers simply do not have the space,’ says Reeringh. ‘Other vessels do have the space, but still cannot take the point loads and the enormous forces (from all sides) during sea transport. So, maybe’s there’s more than 8 ships in total, when one takes a global look, but still, there’s only a handful of ships worldwide that can do this.’

When the company won the contract in June 2019, Jumbo said the Yunlin project was its largest single contract to date. ‘It is particularly special as it allows us to combine the strengths of both our shipping and offshore divisions,’ said Michael Kahn, Managing Director, Jumbo. ‘Our specialised teams, together with our partners, will provide a unique integrated T&I solution – from quayside to seabed.’