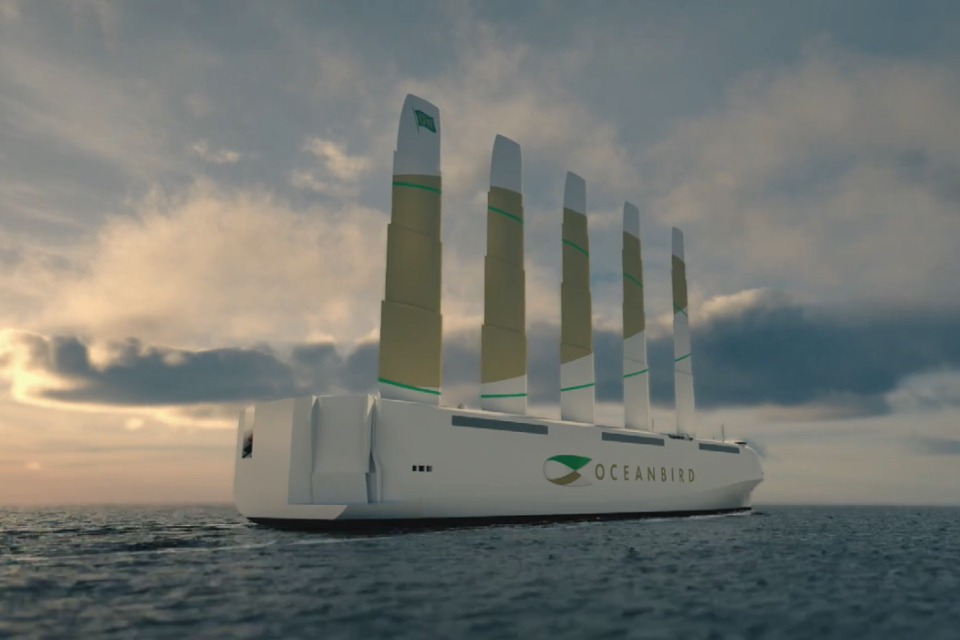 Wallenius Marine has given an update on its Oceanbird project. Per Tunell, Chief Operating Officer at Wallenius Marine says he is now absolutely sure the vessel will become a reality. The RoRo vessel/car carrier with 5 80-metre wing rigs will sail on wind power to reduce emissions by 90 per cent.

‘If you would have asked me five years ago, I would have said the ship would hopefully become a reality,’ says Tunell. ‘Now, I am one hundred per cent sure. The market is now ready or soon to be. We see a growing demand for sustainable solutions and the stakeholders are in line.’

He adds that ‘the technology is now also ready. We now have a 3.0 version of the design. The main challenge is that it is a revolutionary design. It will challenge habits and will definitely be an “odd bird”. It may not fit the current transport systems. These challenges are still there, but less so since its inception.’

Tunell says the ship design is suitable for any deepsea operation, but the company will for now focus on transporting cars on North Atlantic crossings. Söder adds: ‘However, it is a RoRo vessel and is suitable for rolling cargo, breakbulk cargo and basically anything on wheels or on a trailer.’

‘We started with a blank piece of paper and approached it from a holistic perspective,’ explains Carl-Johan Söder, Naval Architect at Wallenius Marine. ‘We have to combine water and wind effects, which is very complex. We needed the wing rigs and hull to work together. This is both the challenge and the key to success. It needs to generate enough power in a safe and robust way.’

Söder: ‘With this ship, there is as much going on above the water as there is below the water. Normally when you optimise a hull, your number one priority is to minimise drag. However, with this ship we also have to take care of the big side forces generated by the wing rigs. We do this with a number of movable fins, which compensate the side forces so that the hull can go straight through the water instead of having a side slip or drift angle.’

‘The wing rigs are similar to airplane wings,’ explains Söder. ‘Airplane wings, however, are asymmetrical in profile to produce lift, the ship’s are symmetrical and can rotate 360 degrees to optimise their position to the wind angle.’

‘This project is basically the engineering dream,’ states Jakob Kuttenkeuler, Professor at the Centre of Naval architecture, KTH. ‘What we have done for this project is basically create models and simulation tools to solve the equations of all the forces acting on the ship. We look at the hydrodynamics for example to predict the vessel’s performance. We have done 100,000s of simulation crossings to test all kinds of design changes.’

A big difference with such a vessel is its height, Kuttenkeuler points out as an example. ‘It is almost 100 metres high, where people usually only use the lower 30-35 metres close to the water. We are using a piece of the atmospheric boundary layer on the ocean people have not used before. A big effort has gone into measuring this atmospheric boundary layer. We had to prepare the boat for what happens in that part of the atmosphere.’

‘We have now built a 7-metre model, which will soon be equipped with four rugs and remote control. We will then start testing manoeuvres to verify our predictions.’

Although Tunell says he does not have ‘the full picture yet’ when it comes to what the vessel will cost, he says it is ‘likely to be only slightly more expensive’ than a traditional vessel. On North Atlantic crossings, the ship is expected to reduce emissions by about 90 per cent. Right now, Söder expects a speed of 10 knots. ‘This is the average speed. Of course when it is windier, the vessel will be able to sail faster.’

The ship will also be equipped with engines as back up and for manoeuvring in port when the sails are slid in. The ship will operate more or less the same in ports as conventional vessels. The fuel to be used is yet to be decided. ‘Our focus is on building a sailing vessel,’ explains Tunell. ‘We will follow the developments in technology however.’

Söder adds to that there are as yet no plans for autonomous operation. ‘We do not want to place too much new technology into one design. But the crew composition will look different and the ship will need other intelligence to inform the crew on board. The rigs will operate mostly autonomously however, such as positioning themselves to benefit from the wind as much as possible.

Tunell, Söder and Kuttenkeuler gave an update on the Oceanbird project during a live press conference on 10 September. The project is co-financed by the Swedish Transport Administration.

Wallenius Marine is not the only company looking to harness wind power to reduce emissions. Last year, the Dutch general cargo vessel owner Jan van Dam Shipping signed a contract with Econowind to install so-called Ventifoils on its shortsea vessel Ankie, which is expected to reduce fuel consumption by 8 to 10 per cent. Wijnne Barends has also done tests with this system. Meanwhile, K-Line and Louis Dreyfuss have been experimenting with kite systems.