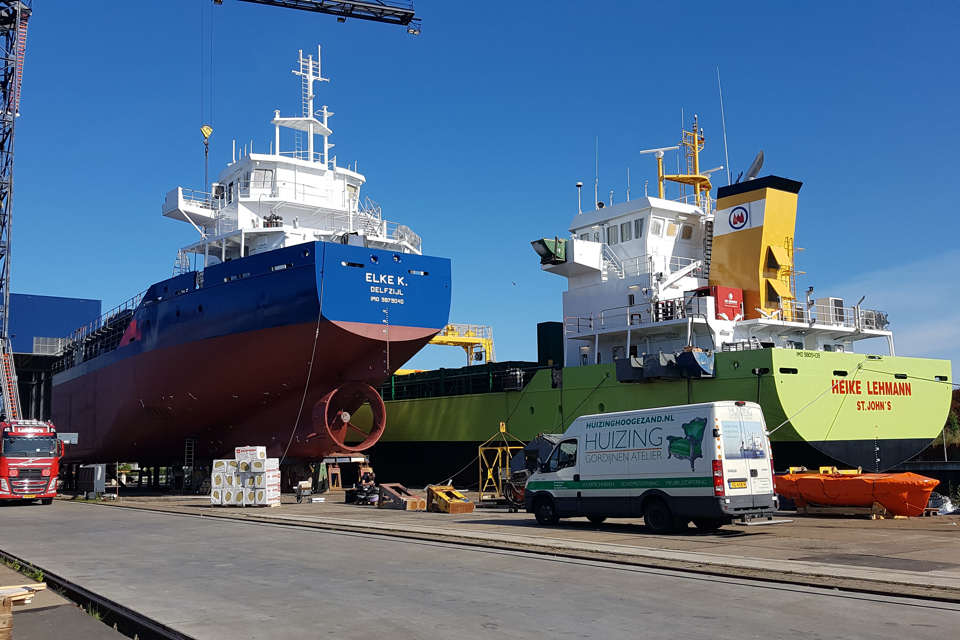 There was a dramatic turndown in the shipbuilding industry last year. Several yards reported red figures and the order intake was just € 351 million, 45 per cent less than in 2018. SWZ|Maritime’s editor Gerrit de Boer has gathered a detailed overview of the ships delivered in 2019 and the order book (as far as known) for the period from 1 January 2020.

The drop in order intake was mainly due to fewer new orders for large dredgers. The decrease in numbers of tugs and workboats ordered seems to have stopped, however, as did the decline in new orders for support vessels for the offshore and wind industry that started in 2018. The shortsea vessel order intake was the only one to show a slight increase with thirteen new orders, mainly at the northern shipyards.

The order book fell by 5 per cent to € 1.76 billion. This decrease was limited because the number of ships delivered also fell from 55 to 43. The order book still includes a number of large complex, but unfortunately loss-making projects with an expected delivery in 2020.

The total turnover of Dutch maritime suppliers rose to € 3.8 billion in 2019, compared to € 3.5 billion in 2018, approximately 65 per cent of which resulted from exports. The total turnover of the Dutch maintenance and repair yards in 2019 amounted to € 429 million, a slight increase compared to the previous year: € 416 million. However, employment figures have fallen from 1751 to 1655 because shipyards need to operate more flexibly and efficiently in order to be able to write black figures in the current market.

The total turnover of the Dutch maritime-technological sector increased compared to 2018 by approximately € 360 million to € 7.7 billion. The total workforce remained virtually the same as in 2018: from 29,072 FTEs to 29,140 FTEs at the end of 2019. The shipyards employed 11,566 FTE, including hired staff, and the maritime suppliers 17,574 FTE excluding hired staff.

For the construction of inland, fishing and small seagoing vessels larger than 100 GT, 2019 was a reasonably good year. The order book grew from 140 vessels to no less than 198 vessels in 2019 with a total value of € 1,379 million. The order book for superyachts longer than 24 metres also remained fairly stable at € 4.0 billion.

Although not complete due to a lack of complete information, the map on the middle pages of SWZ|Maritime’s July/August 2020 issue, is a representative indication of the ships completed in the Netherlands during 2019. Ships built at foreign yards under supervision and/or licence of Dutch yards have been included. In addition, nine special vessels delivered in 2019 are highlighted. The issue can be found in our archive.

The order book (as far as known) for the period from 1 January 2020 can be downloaded here. This list has been compiled by our editor Gerrit J. de Boer in cooperation with Michel Koopman, Market Analyst at Netherlands Maritime Technology and René Cornel, Deventer.