Engine, Hull Vane and bulbous bow retrofit reduce fuel use by 24 per cent 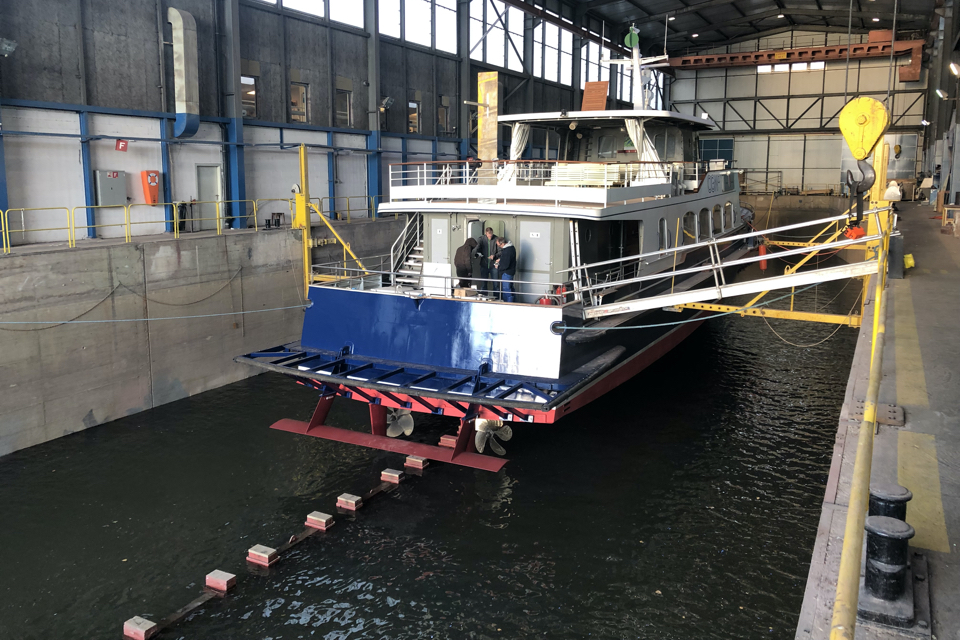 As a test case, the small passenger vessel Valais has undergone an energy-saving retrofit. The ship was fitted with a Hull Vane, a kind of spoiler located under water, a bulbous bow and the engines were replaced. Tests were then conducted which showed fuel consumption was reduced by 24 per cent.

The 30-metre passenger vessel Valais owned by Swiss ship owner CGN was built in 2008 and services the N3 line, connecting Yvoire (France) to Nyon (Switzerland) by up to forty crossings a day.

‘We selected the 30-metre passenger ship Valais and commissioned a ship optimisation study by means of Computational Fluid Dynamics (CFD) software, comparing several possible hydrodynamic improvements at our operating speed of 25 km/h,’ says Irwin Gafner, technical director of CGN. ‘In the study, the benchmark hull (which has a trim wedge) was compared to various retrofit alternatives for the stern, such as ducktail extensions, interceptors (a vertical blade protruding below the transom) and a Hull Vane.’

The underwater spoiler proved the best alternative promising a resistance reduction of about fifteen per cent. Gafner: ‘We then also asked to optimise a bulbous bow for the ship with Hull Vane.’

After the hydrodynamic study, CGN Technique ordered the Hull Vane from Hull Vane BV in the Netherlands and the bulbous bow from a local subcontractor. Lake trials were performed before dry docking, in which accurate measurements were made of the ship’s fuel consumption. During the scheduled dry dock period at the CGN Technique facilities in Lausanne both devices were installed, and the main engines were replaced with new common-rail V8 MAN engines. After launching of the vessel, ballast was added in the bow to bring the ship to the appropriate draught.

In spite of the significant amount of added weight, including Hull Vane, bulbous bow construction and ballast, the results showed that the fuel consumption of the vessel was reduced by 24 per cent compared to the trials before the retrofit. In the video (posted below), it is said the Hull Vane is responsible for a 15 per cent reduction and the bulb for the other 9. But wouldn’t the new engines also play a role in this?

‘It is difficult to estimate exactly which part is accounted for by the Hull Vane, the bulb and the new engines,’ says Bruno Bouckaert, Sales Director of Hull Vane BV. ‘We divided the 24 per cent between the Hull Vane and the bulb, based on their respectively resistance reductions in CFD. It is correct, however, that a small part of the savings will be the result of the new engines, and based on the calculations before the retrofit, we estimate that to be about 2 percentage points. That would mean that the saving of the Hull Vane would be fourteen per cent and that of the bulb eight per cent instead of the fifteen and nine per cent in our video.’

Noise measurements on board also showed that the improved efficiency, lower rpms and new engines made the vessel quieter: the noise level was reduced by 2 dB(A) in the wheelhouse and by 6 dB(A) in the passenger lounge. The vessel now also makes significantly less waves, a fact which is appreciated by the recreational users of Lake Geneva. The added weight and added submerged surfaces also improve the stability and seakeeping of the vessel.

‘There are a lot of small passenger ships ranging from 20 to 100 metres in use worldwide, on rivers, lakes and servicing islands,’ Bouckaert points out. ‘Because of their length and displacement, they often operate at excellent speeds for Hull Vane effectiveness, making a retrofit very worthwhile. We are very happy that CGN took this pioneering step. Having a Hull Vane on a passenger ship also makes it a lot easier for us to show clients how simple and effective the device really is. MS Valais is the ideal demo boat, as we can simply buy a ticket and make a crossing on board.’

Gafner concludes: ‘We are extremely pleased with the results of this retrofit. Improving the hydrodynamics of a vessel makes perfect sense, regardless of which fuel we will be using in the future. Using less fuel makes a future energy transition easier and more affordable, and in the meantime, we have the benefit of lower fuel costs, less CO2 emissions, less noise and less waves. Coming from an automotive background, I am amazed at the savings percentages which are still possible on passenger ships. There is a huge untapped potential for CO2 reduction on ships, it is very low-hanging fruit. We have calculated that this retrofit on MS Valais will reduce CO2 emissions by 129 tonnes per year, and of course also 24 per cent of diesel particles and NOx emissions. Last but not least, the return on investment is excellent.’