Shipping ever safer, but fires are cause for concern 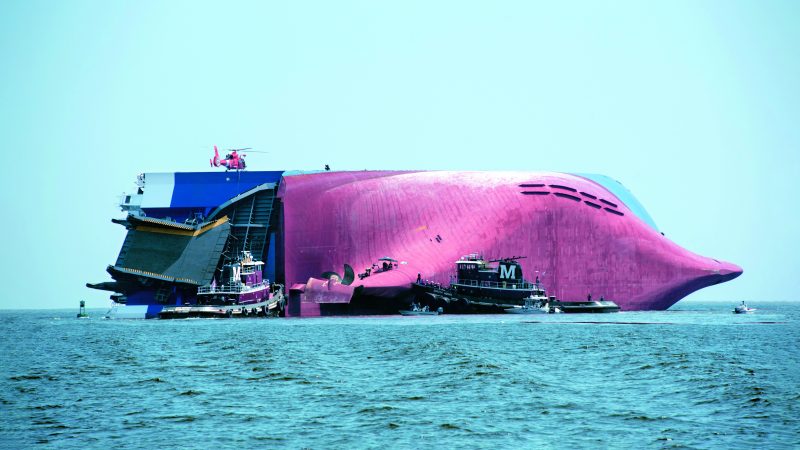 The number of shipping disasters involving the complete loss of a ship fell to its lowest level ever last year. On the other hand, the growing number of serious fires on container ships is giving insurers sleepless nights.

According to the annual Shipping Review of the German insurance giant Allianz, last year 41 ships of more than 100 gross tonnage (GT) were lost worldwide; twelve less than the 53 of 2018 and less than half of the average in the last ten years.

The overview reports 951 ships were lost worldwide since the start of 2010. Three quarters of the “total losses” sank, mostly due to bad weather. Five ships were scrapped as a result of fire or an explosion on board. Three ran aground. One loss was due to a collision and one ship was in such poor condition the hull was riddled with holes.

Cargo ships are, as always, the most important category. Last year, Allianz recorded fifteen total losses in this category, whereby it should be noted that the insurer registers bulk carriers, tankers, ro/ro and container ships as separate categories. If these are added to the cargo ships, the number rises to twenty, or almost half of the total. Incidentally, last year no tankers were lost, but a bulk carrier, a container ship and three ro/ro ships were. In second place, also traditionally, is fishing. Nine ships were lost.

Remarkably, the number of total losses in the past two years was considerably below the average of the past ten years. In the previous eight years it had averaged one hundred and six, with ninety ships lost in 2014 as the lower limit.

Allianz mentions a number of obvious reasons why the number of shipping disasters is falling, such as better designs, stricter regulations and safer procedures, but this does not seem to explain the changing trend of the past two years.

In the area between South China, Vietnam, Indonesia and the Philippines, twelve ships were lost, almost a third of the total. The Gulf of Mexico and the West African coast followed with four and three total losses. Together, these three regions account for almost half of the total. On the busy Baltic Sea, only one ship was lost, as was the case on the entire North Atlantic and the huge North Pacific Ocean.

However, the picture is very different when looking at all the insurance claims. This ranking is led by Western Europe with the area around the United Kingdom, the English Channel, the North Sea and the Bay of Biscay. Here the number of incidents rose by 113 to 605. Since the number of claims in the Eastern Mediterranean, including the Black Sea, fell by 63 to 472, that region fell back to second place. The previously mentioned area south of China comes third with 255 damages.

Engine failure is the main cause of damage by far with 1044 out of 2815 incidents. Allianz points out that over the years, the shipping industry has switched from maintenance at fixed intervals to maintenance based on the condition of the engine. In the future, thanks to digitalisation, this will probably shift further to preventive maintenance. According to the insurer there is still a world to gain with this, but the collection of reliable data still causes headaches.

The insurer devotes a separate chapter to the large number of “spontaneous” ship fires in recent years, especially on container ships. Officially, last year the number rose to a record level of forty, or an average of one every ten days. However, Allianz states that the total number of incidents is probably a lot higher because not all fires are reported, for example because the crew knows how to extinguish a starting fire themselves.

On top of this, the chance of large claims has increased considerably over the years due to the enormous increase in scale in container shipping. Alliance once again highlights this with the observation that a modern container ship can carry fifteen times as many containers as a first generation container ship from 1968.

At the same time, the crews have become ever smaller and the extinguishing capacity has lagged behind the increase in scale. Whereas a ship used to have one fire hose, now there are two, according to Allianz. According to the insurer there is an urgent need for additional regulations.

The insurer especially pleads for better detection systems, because a number of recent fires were only discovered when they were already beyond the crew’s ability to control them. This applies for example to the Yantian Express of Hapag Lloyd, at the beginning of last year in the middle of the Atlantic Ocean. The crew only discovered the fire when two containers were on fire. Due to the severe weather conditions, 8/9 Beaufort winds, cold and rain, the battle was actually lost beforehand. After a few days, the crew had to be evacuated and special fire extinguishers from Smit Salvage were needed to contain the sea of flames.

The Union of Marine Insurance (IUMI) has now made proposals to increase the requirements for fire detection and extinguishing capacity. This would have to be done by amending the Convention for the Safety of Life at Sea (Solas) of the International Maritime Organization (IMO). This may take some time given the lengthy procedures between proposal and ratification of IMO conventions. But it is necessary, says the insurer: ‘If it does not happen, the number and severity of fires on container ships will probably only increase further’.