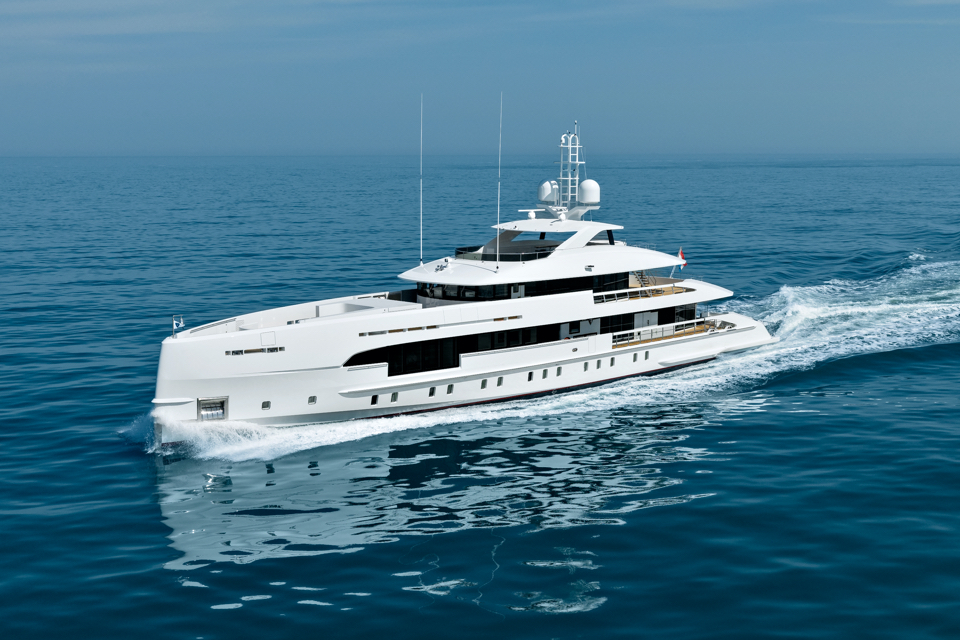 The sea trials took place over three days earlier in May on the North Sea, in sea state 2 with an average wind speed of 3 Beaufort. During the sea trials, Amare II exceeded the contractual speed by 0.9 knots reaching a top speed of 17.2 knots in diesel mode, and 10.2 knots in silent mode, with noise and vibrations in line with the specifications.

Amare II is the second in Heesen’s hybrid series with distinctive exterior lines, such as a vertical bow with spray rails, by Omega Architects. The yacht features a lightweight aluminium Fast Displacement Hull Form to reduce fuel consumption. Devised by Van Oossanen and engineered by Heesen’s in-house team, the hull was welded to the highest tolerances at Heesen’s facility in Oss. The Dutch shipyard’s in-house luxury cabinet maker company, Heesen Interiors, crafted the furniture penned by Italian designer Cristiano Gatto.

Heesen states that delivering a superyacht during the Covid-19 pandemic was a challenge, but that the company succeeded ‘thanks to the swift reorganisation of the in-house work schedule, which was adapted to meet governmental regulations and ensure the safety of all staff and suppliers involved in the operations.’ Tests at sea were performed with minimum crew in order to guarantee the necessary physical distancing and extra safety measures were put in place.

Captain Brenden Scott, an experienced Heesen captain, arrived in the Netherlands just prior to the lockdown and in time to supervise the completion and fine-tuning of the yacht. He succeeded in putting together a full crew to run Amare II for the coming summer season. The yacht is privately owned and will cruise in the Mediterranean for the summer season.

Twelve guests are accommodated in five lower deck suites and a master stateroom on the main deck forward. The interior design by Cristiano Gatto integrates organic shapes that emphasise the indoor-outdoor connection by way of deep and low furniture. Guests are invited to fully enjoy the many panoramic vistas through floor-to-ceiling windows.