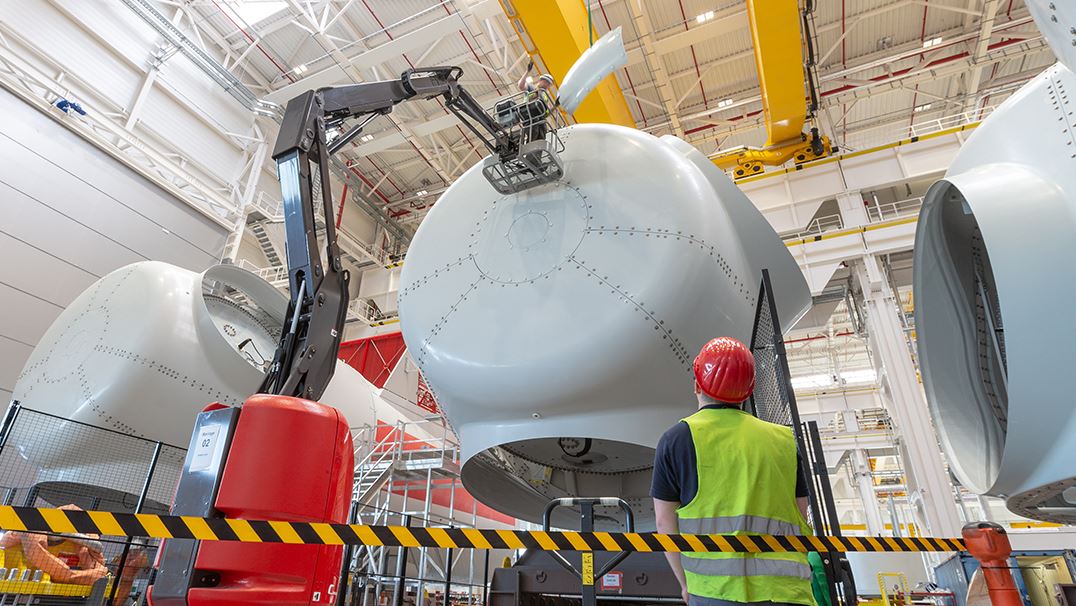 Siemens Gamesa has announced a new 14-megawatt (MW) offshore wind turbine to challenge GE’s 12-MW Haliade-X turbine. Figures show it will be slightly bigger than the Haliade-X, but the nacelle will be 100 tonnes lighter. ‘We’ve gone bigger for the better,’ CEO Markus Tacke says.

The new SG 14-222 DD offshore wind turbine will have a design capacity of 14 MW, but in combination with the company’s Power Boost function, be able to deliver up to 15 MW. It will have have a rotor diameter of 222 metres and features 108-metre long blades. That is slightly bigger than GE’s Haliade-X, which has a diameter of 218.2 metres and comes with blades that measure 107 metres in length.

The turbine features a light-weight nacelle of 500 tonnes, which is 100 tonnes less than the 600-tonne nacelle of the Haliade-X. This enables Siemens Gamesa to use an optimised tower and foundation substructure and ultimately lower costs per turbine by minimising sourced materials and reducing transportation needs, the manufacturer states.

‘We’ve gone bigger for the better,’ says CEO Markus Tacke of Siemens Gamesa. ‘The new SG 14-222 DD is a global product which allows all of us to take giant steps towards protecting and preserving our planet.’

‘Offshore is in our DNA,’ adds Andreas Nauen, CEO of the Siemens Gamesa Offshore Business Unit. ‘Since we helped create the offshore wind industry in 1991, we’ve been determined to safely increase operational performance, minimise technology risks, and create a consistently lower Levelised Cost of Energy.’

The SG14-222 DD provides a capacity leap of more than 25 per cent in comparison with Siemens Gamesa’s current largest offshore wind turbine, the SG11-200 DD, which has an 11-MW power output. One unit will save approximately 1.4 million tonnes of CO2 emissions compared to coal-fired power generation over the course of its projected 25-year lifetime.

A first prototype is expected to leave the factory in 2021. Commercial availability is planned for 2024.

GE last year made headlines globally with the launch of the 12-MW Haliade-X offshore wind turbine, which saw the manufacturer double the maximum capacity of its offshore wind turbines. It is currently the largest wind turbine in the world. A first prototype has been erected close to Sif Group’s production facility for turbine foundations in Rotterdam.

The Haliade-X is already expected to become commercially available next year and it will not necessarily be overtaken by the SG14-222 when it hits the market in 2024. GE has rated the Haliade-X for a capacity of 12 to 14 MW so the turbines might end up having the same power output when Siemens Gamesa starts commercial production.