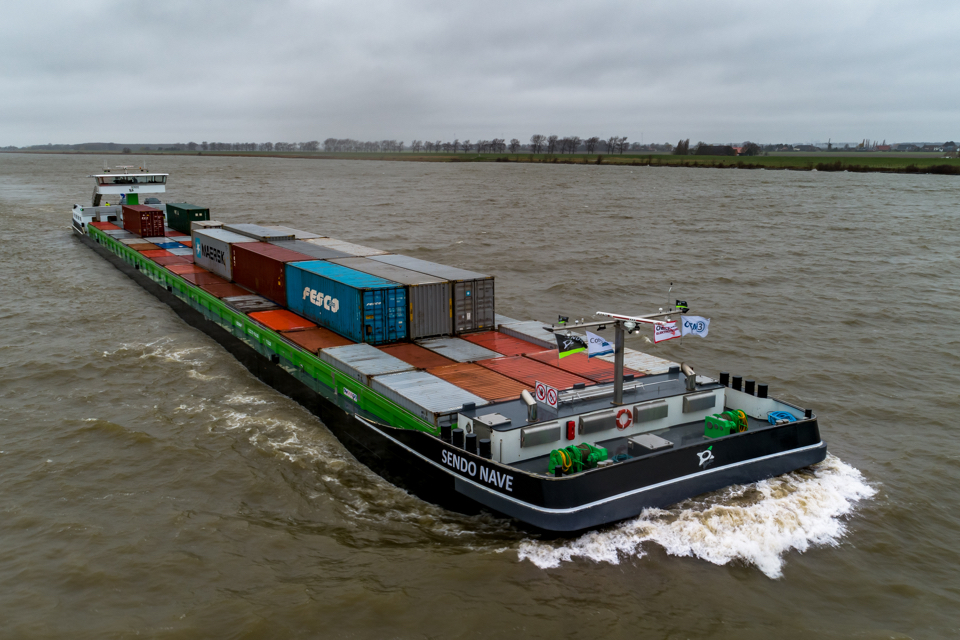 Sendo Shipping has completed sea trials with the Sendo Mare and Sendo Nave. The so-called Sendo-XL vessels are equipped with two large ballast propeller pumps in combination with two ejectors due the bridges they have to pass. These ships already meet the 2030 Green-Deal target for inland shipping.

The ballast propeller pumps and ejectors make it possible to pump approximately 1800 tonnes of ballast water, both in and out, in just two hours. This allows the ship to sink down into the water a little to pass the bridges it encounters. Both Sendo vessels sail between Rotterdam/Antwerp – Amsterdam/Zaandam v.v. and pass through the Amsterdam Rhine Canal where the bridges have a height of 9.00 metres.

As soon as the ship reaches its economical speed, the electro motors automatically adjust their power to 385 kW. In both front engine rooms there is a Veth-Compact-jet bow thruster with a Rotor electric motor, 430 V, 50 Hz, 450 kW. For safety reasons, the engines are adjusted in such a way that if one fails while sailing, the other engine will start automatically. During the trial runs, both ships achieved the following speeds with approximately 3800 tonnes of cargo at a draught of 3.25 metres:

Comparison with the Sendo Liner

The Sendo Liner, which came into service at the beginning of 2019 and won the Maritime Award KNVTS Ship of the Year in November 2019, is equipped with two generators of 425 kW each set to 385 kW.

The table shows the measurements taken during the technical trials. This shows that the Sendo Liners XL perform even better than the Sendo Liner due to further optimisation in combination with a larger size. With these capacities and numbers, the Sendo-XL fleet already meets the Green-Deal target of reducing CO2 emissions from inland shipping by forty percent by 2030.

Comparison of the technical test runs and the kilowatt-power of the Sendo vessels per test run tonne.