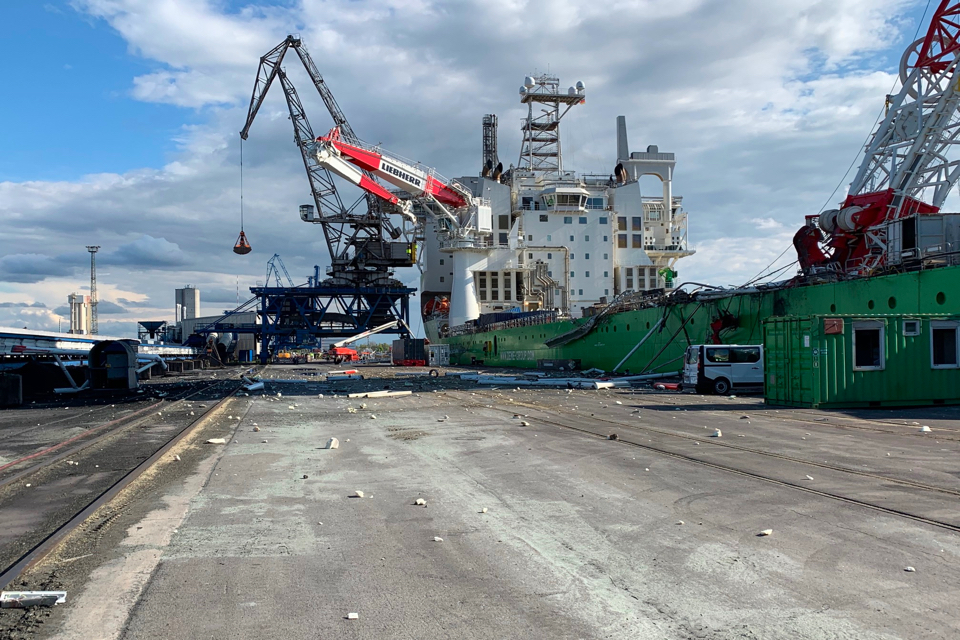 A malfunctioning hook from an external supplier caused the crane accident onboard Deme’s new offshore vessel Orion 1. Why the hook did not withstand the load is still unclear, but authorities and experts unanimously agree that this was the cause, reports Liebherr.

The accident happened during load tests of the crane on 2 May at Liebherr’s manufacturing facility in the port of Rostock. That day an overload test was planned for a load scenario of 5500 tonnes, 500 tonnes more than the crane’s advertised safe maximum lift capability of 5000 tonnes. This is a standard procedure to test the crane’s maximum lifting capacity.

The lift should have been carried out through the hoisting of a barge but at a load of around 2600 tonnes, the hook failed and caused a chain reaction which led to the accident, Liebherr reports. The company did not say where the hook was bought.

A total of twelve people were injured in the accident and two of them had to be taken to hospital for treatment. ‘We wish the injured persons a full and speedy recovery. Considering the extent of the damages, we are above all thankful that it did not cause more personal injuries,’ says Managing Director Leopold Berthold of Liebherr-MCCtec Rostock.

The exact reasons as to why the hook did not withstand the load are unclear, but the hook was designed by and purchased from an external supplier. A design or production error of the Liebherr crane can therefore be excluded, the company states. ‘Our priorities currently lie in fully supporting the investigating authorities in order to contribute to the quickest possible clarification of the accident,’ added Berthold.

Tens of millions in damages

According to initial estimates, the damage amounts to ‘a high double-digit million figure’, but indirect damages could be much higher. The Orion 1 was scheduled to be delivered to DEME in the second half of May 2020 and was lined up to install 103 jackets for the Moray East offshore wind farm in the UK, starting in July. Considering the damage of the crane and vessel, the Orion 1 will not be finished in time to execute this project.

‘We are currently searching for a new vessel to install the jackets,’ spokesperson Vicky Cosemans of DEME tells Project Cargo Journal, which is also published by SWZ|Maritime’s publishing partner Promedia. ‘This could be one of our own vessels or a vessel chartered from another company.’ Cosemans confirms that the initial investigation shows the hook as the cause of the accident, but adds that further investigation into the accident is needed.

Video of the accident: