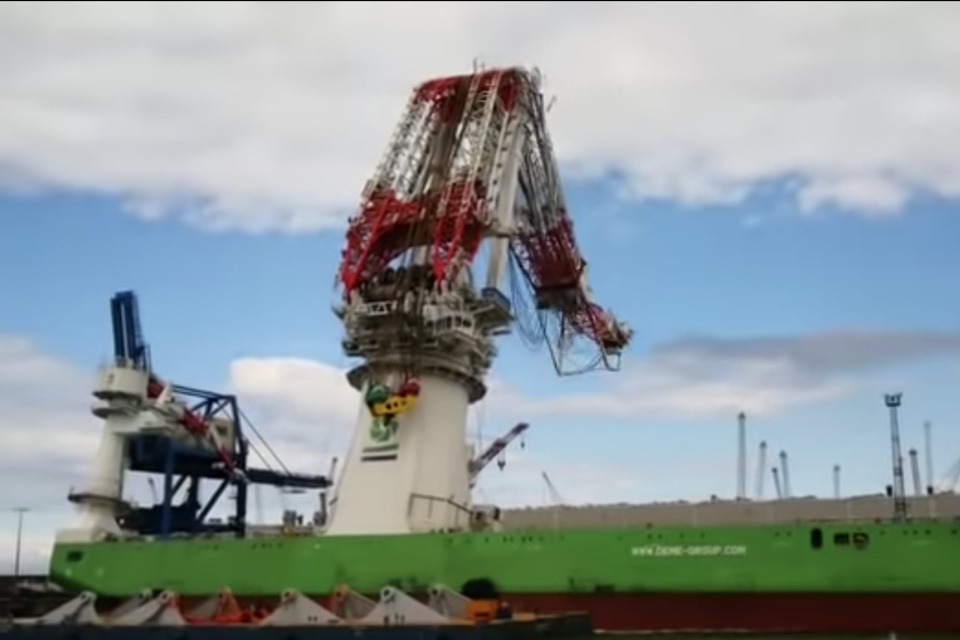 The 5000-tonne heavy-lift crane of DEME’s new installation vessel Orion 1 has collapsed while undergoing load tests at Liebherr’s construction yard in Rostock. Five people sustained minor injuries and vessel and crane have suffered damage. It is the second incident at Liebherr’s Rostock facility in a short amount of time.

The 215-metre long dual-fuel construction vessel Orion 1 is owned by Cosco Offshore and was scheduled to be delivered to Belgian offshore contractor DEME in the second half of May. Undoubtedly the delivery will be drastically delayed. The crane is heavily damaged and the vessel itself will likely have sustained damage as well.

The vessel was still under construction, but nearing completion when the crane collapsed on Saturday 2 May. DEME has issued a statement saying the incident happened while performing load tests. The Belgian offshore contractor added that the damage will be assessed in the upcoming days and weeks.

According to the German police the load test concerned the lifting of a pontoon. During this test the rope broke and the upper half of the crane tilted; it hit the ship and the quay wall. There were 120 people on the ship at the time of the accident. Five people who were in the crane’s cabin were injured, two of whom had to be treated in hospital. The Rostock police are investigating the circumstances of the accident.

Orion 1 arrived in Rostock in November last year to be fitted with Liebherr’s first HLV 295000 crane, which has been designed to lift super heavy loads up to 5000 tonnes. For Liebherr, this is a ‘landmark offshore project’ as the company is expanding its range of offshore vessel cranes.

It is the second incident at the Rostock construction yard in a short amount of time. In February, two Liebherr mobile harbour cranes fell off the heavy-lift vessel Jumbo Vision during loading operations. It was initially reported that the Liebherr cranes had come into contact with the shipboard cranes of the vessel, but Jumbo Shipping later issued a statement that there’s no evidence that supports this claim. It took weeks to salvage the cranes from the port basin.

Based on the article that first appeared on Project Cargo Journal, another publication of SWZ|Maritime’s publishing partner Promedia, with additions from the German police.