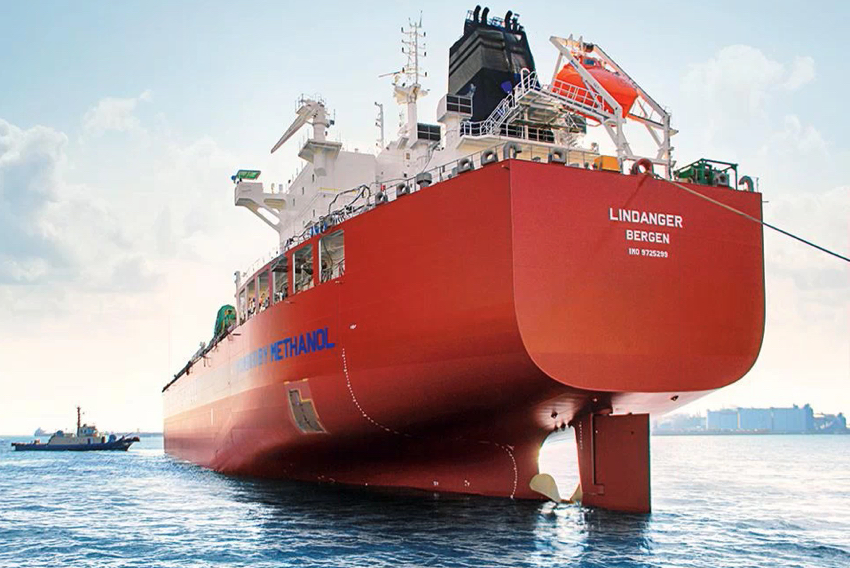 Waterfront Shipping’s vessels have operated on methanol for over 70,000 hours. When it comes to the key takeaways, Paul Hexter, President of the company, says: ‘The technology works, we achieve Tier III NOX compliance with water blending and the fact that we achieve higher efficiencies compared to conventional fuels is exciting.’

In a webinar, hosted by Methanex Corporation and MAN Energy Solutions, Hexter together with Stuart McCall, Director Business Development at Methanex, and Kjeld Aabo, Head of Marine and Offshore Sales for two- and four-stroke engines at MAN Diesel & Turbo, discussed the developments of methanol as a marine fuel. Because methanol has lower emissions than conventional fuels (SOX -99%, NOX -80% (with water blending), PM -95%, CO2 -13%), stricter environmental regulations are partially responsible for the increase in demand. But the substance has other benefits.

‘Methanol is a clear, colourless liquid that quickly and naturally biodegrades,’ says McCall. ‘In case of a large spill, it would quickly dilute to low concentrations. It wouldn’t persist in the environment, making it more environmentally benign than conventional marine fuels.’ Another advantage is that the fuel has a long history of handling it, meaning the technology needed is available. ‘Moreover, methanol is available globally at over 88 of the world’s top 100 ports from multiple suppliers,’ says McCall. ‘Bunkering methanol is pretty straightforward and existing infrastructure only needs minor adjustments to handle methanol.’

‘Conversion of a ship can be achieved rather easily when compared with conversion for other fuel types such as LNG,’ explains McCall. ‘This has to do with the fact that methanol is a liquid fuel at ambient temperature and pressure. When looking at the business case, payback time on methanol engines is two to three years according to the European Maritime Safety Agency.’

The international standard for methanol as a marine fuel (IGF Code) is being finalised, which could boost its uptake further.

As methanol can be used in dual-fuel engines, it allows the fuel choice to be flexible. As a liquid fuel without any need for cryogenic installations, it is also easy to handle. As a low flashpoint fuel, however, it cannot be stored in the engine room and needs to be supplied to the engine through double hulled piping.

Methanol can be created from different sources, including sustainable options, such as biomass and recycled carbon dioxide (resulting in renewable methanol). Using renewable methanol, instead of standard methanol does not require additional investments from the ship owner. As McCall points out, ‘It doesn’t matter what the production source is, methanol is methanol, is methanol. As long as it meets the specification, then there won’t be compatibility issues.’

Waterfront Shipping is a global marine transportation company and a subsidiary of Methanex Corporation. As of the end of 2019, the company operates eleven vessels capable of running on methanol. Hexter: ‘Together, these ships have 70,000 operating hours running on methanol and have recorded slightly better specific fuel oil consumption when running on methanol (roughly two per cent).’

Methanol as an add-on

The methanol engines Waterfront uses, are based on a traditional diesel engine. The methanol component is an add-on feature. As such, the engine can always fall back on conventional fuels. Hexter: ‘The hours operated on methanol have shown unrestricted power, improved efficiency and reduced emissions, with five per cent pilot fuel.’ MAN now has an order book for fourteen of these LGIM engines in total. Eight are already in service.

No exhaust gas after treatment with water blending

McCall: ‘Importantly, you don’t need equipment investments such as Selective Catalytic Reduction (SCR) to reduce SOX and NOX emissions when you apply water blending in the methanol engine. This allows ships running on methanol to achieve Tier III NOX standards without after treatment.’

Aabo explains this technology in more detail: ‘LGIM-W is a solution where we put water into the methanol where we actually achieve IMO Tier III. It is true that to have a very high efficiency in the combustion chamber, you also need to have a high peak temperature, based on whatever fuel and energy you have. Unfortunately, the paradox is that with a high peak temperature, you will also have a high NOX level.’

‘Here, it is much easier because you have a solution of methanol and water. The water in itself, when it is injected into the methanol will actually need to be evaporated and thereby lowers the peak temperature and thus the NOX emissions. There will be a small penalty in fuel oil consumption, however, but it is a much simpler system than exhaust gas after treatment.’ Of course the company admits there were some teething problems, mainly because it was a technology being applied for the first time following a relatively short R&D phase. In addition, special attention had to be paid to having to deal with a low-flashpoint fuel, uncovering the right mix of sensors, injectors and valves, and due to the low viscosity and lubricity it took some time to get the balances correct.

To conclude, Hexter points out that methanol has ‘well-understood and manageable hazard properties.’ These can be managed with measures such as double-walled piping and components, CO2 extinguishing, CCTV monitoring, alarms with shutdown and purging, firefighting systems, additional crew training, leakage detection and continuous ventilation.

Nothing to hold methanol back

‘Methanol has proven to meet current and future emission regulations. Dual-fuel engine technology is proven at a commercial scale. It is a practical and cost-competitive alternative marine fuel and environmentally friendly,’ concludes Hexter.

McCall can support this: ‘In my view, there is nothing holding back methanol’s use as a low-risk, low-emission, cost-competitive marine fuel for today and tomorrow.’