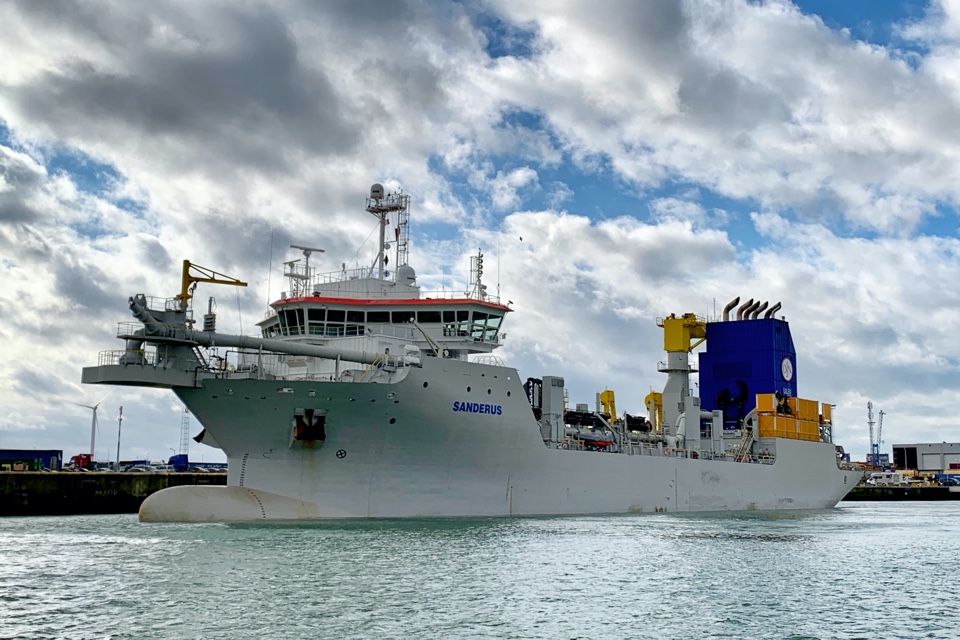 Jan De Nul Group’s newest Trailing Suction Hopper Dredger Sanderus has arrived in Belgium to execute maintenance dredging works in the coastal ports. The dredger is an ULEv or Ultra-Low Emission vessel as it has a two-stage catalytic filter system on board.

The dredger Sanderus is Jan De Nul’s fourth ULEv that has been launched within the past year. The vessel was built in Singapore and left the shipyard in January after successful offshore tests. Another three vessels with the same technology and ultra-low emissions are under construction.

The Sanderus has now arrived in Belgium, where in the next two years, it will maintain the navigation depth in the marine access channels to the Flemish ports under the authority of the Flemish Government.

Internal combustion engines without post-treatment emit air pollution affecting both climate and air quality. Air pollution and particulate matter damage our health and also have a direct impact on our living environment. The ULEvs are equipped with a catalyst that renders nitrogen oxides harmless and with a soot filter blocking the finest particles.

‘In a business-as-usual scenario, air pollution would be responsible for 8.8 million deaths a year, worldwide,’ says Mieke Fordeyn, Director of Jan De Nul Group’s International Division. ‘That is twice as many as what was assumed so far. Also shipping has a partial responsibility in this area. And even if the dredging industry accounts for only 0.1% of the total emission of global shipping traffic, we feel personally involved in this issue and regard it as one of our core missions to do something about it.’

For its maritime fleet, Jan De Nul Group plans to switch to 100 per cent renewable fuel, a certified sustainable substitute for fossil fuel made from waste flows. Since the end of 2019, the first Trailing Suction Hopper Dredger sails on 100 per cent biofuel. Jan De Nul Group is now considering this for other dredging vessels as well.

‘Such renewable fuel offers the huge advantage that engines must not be adapted so that the fuel can be used immediately,’ explains Michel Deruyck, Head of Energy at Jan De Nul Group. ‘As this solution makes use of biological waste flows as raw material, it is also beneficial to the circular economy. Research into fuels of the future is useful, but it should not prevent us from using sustainable solutions already available today for the much-needed energy transition within the shipping industry.’