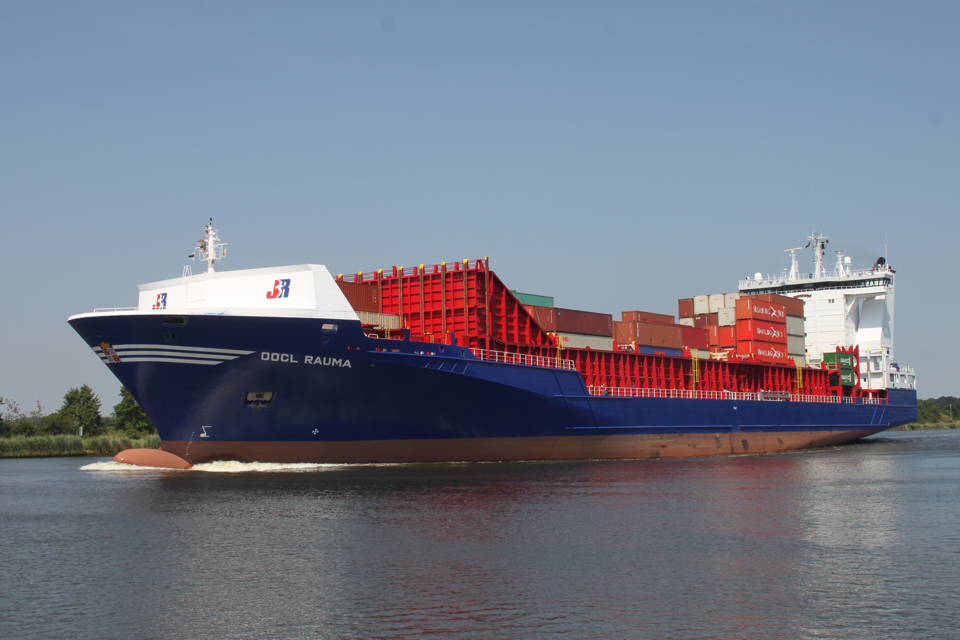 (Update Thursday 09:33) The ship OOCL Rauma has lost five containers north of Ameland, one of the Dutch Wadden Islands, on 11 February. During the following night, the ship lost another two sixty kilometres northwest of Terschelling. The containers do not contain any hazardous substances.

At first, it became known three of the containers contained paper and cardboard. Another two were later discovered to carry package equipment for a paper machine. The other two contained milk powder.

The ship had left the port of Kotka, Finland, and was on its way to Rotterdam where it arrived during the night of 12-13 February. The OOCL Rauma sailed 43 kilometres north of Ameland when it reported the loss of the first five containers to the Coast Guard. The Coast Guard sent support vessel ETV Guardian to this location. The Coast Guard also deployed a plane to locate the containers.

The plane spotted two closed containers floating and an open container. Paper rolls have drifted out of the latter. The Guardian remained on site for some time for imaging, locating containers and possibly warn shipping, but had to return to Den Helder due to technical difficulties at around 8 pm on 11 February.

Navigation messages are being sent to ships in the vicinity with last known positions of the containers. On Wednesday afternoon, a German patrol plane of the Havariekommando flew over the positions where the containers were reported to have fallen overboard but, hasn’t spotted anything.

The Coast Guard plane is flying its regular patrol flights on Thursday 13 February, but will also search the area where the containers fell overboard for any floating material. Salvaging of the containers will be carried out via
Rijkswaterstaat, which is part of the Dutch Ministry of Infrastructure and Water Management.

The ship is officially named Elysee, but sails under the charter name OOCL Rauma. It is 179 metres long and 27 metres wide with a capacity of 1425 TEU. The ship sails under the Dutch flag and is owned and managed by JR Shipping in Harlingen, the Netherlands. At the moment there is wind force 8 Beaufort from the west.

Following the incident with the MSC Zoe in January 2019, which lost 342 containers on the the Wadden Sea southern shipping route, the Coast Guard advised ships over 300 metres long and over forty meters wide to take the northern route when encountering wave heights of five metres or more. These types of ships would run the risk of hitting the seabed in these conditions. As the OOCL Rauma is smaller, the Coast Guard stresses this does not apply to this ship.