Downtime and world record at Maasvlakte due to storm Ciara 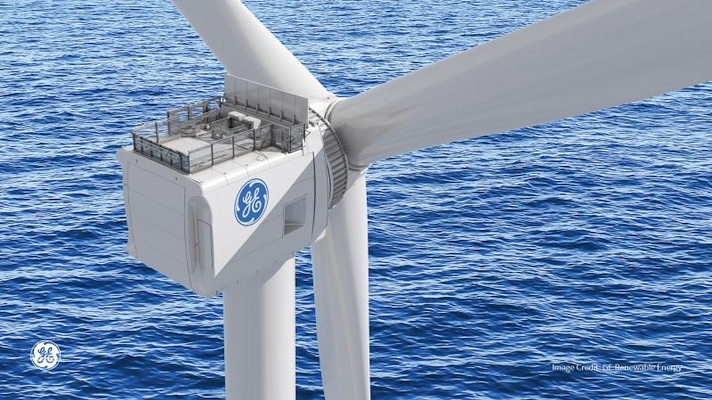 As a result of storm Ciara, the container terminals on the Maasvlakte were idle all day on Monday 10 February and for most of Tuesday as well. At the same time, the prototype of General Electric’s Haliade X-12 wind turbine set a world record in energy generated in 24 hours.

Rotterdam World Gateway (RWG) reports on the basis of the latest wind forecast that the terminal will probably not be able to start operating again until Tuesday evening. ECT also expects the Delta Terminal and Euromax to reopen in the course of Tuesday. APM Terminals, which has two terminals on the Maasvlakte, also assumes that it will not be possible to resume operations until Tuesday.

This means that a total loss of production is estimated of around sixty hours and that it will probably take days to catch up again. Each terminal has its own weather station and receives a customised wind forecast every few hours. Nevertheless, “the big five” usually suspend operations at the same time in strong winds. On Sunday this happened around eight o’clock in the morning.

On the other hand, at least one company was excited about storm Ciara, which was heavier than expected with peaks at sea and on the coast of 11 Beaufort. General Electric has reported a “world record”. Its wind turbine Haliade X-12 on the Maasvlakte produced 288 Megawatt hours of electricity in 24 hours.

According to GE, this is more than any wind turbine has ever achieved in a 24-hour period. The company stated the turbine already reached a record of 262 Megawatt hours last December. The wind turbine on the Sif site, with blades of 107 metres and a tip height of around 230 metres, is a prototype. Delivery of the first units is due to begin in 2022.

Few incidents in Port of Rotterdam

According to the statement made many ships stayed outside and the pilot service was adapted. ‘Due to the storm, a few push barges in the Waalhaven got adrift, but were quickly moored again. In the Europahaven, an inland navigation vessel broke loose and hit a jetty, but the situation was under control quickly. A few ships received tug assistance due to broken mooring lines.’

This article first appeared on Nieuwsblad Transport, a sister publication of SWZ|Maritime.