Royal IHC is ready to take on deepsea mining 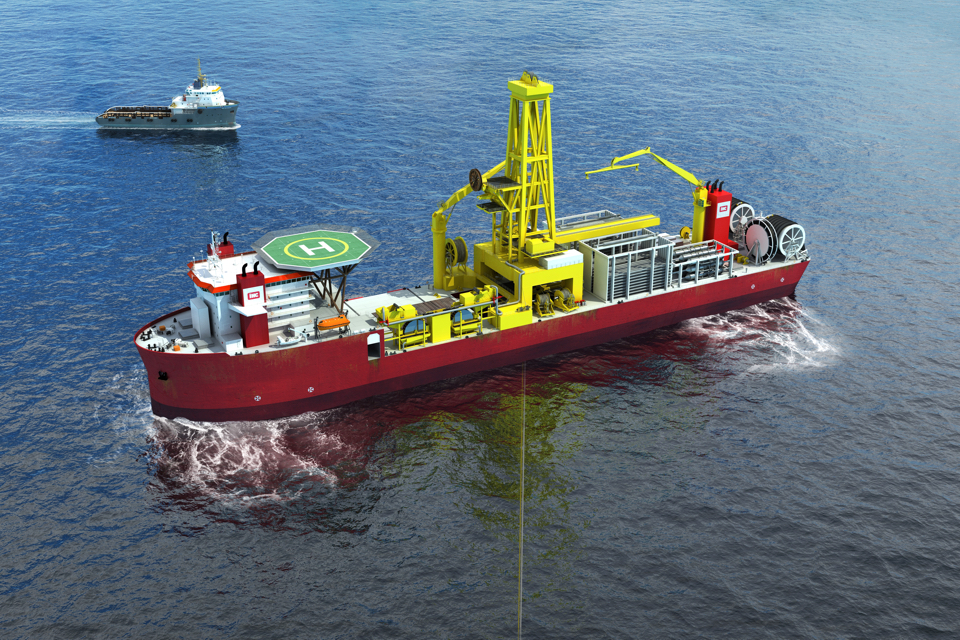 ‘Deepsea mining is not an adventure for the quick and easy,’ says Laurens de Jonge, Manager Marine Mining at Royal IHC. Still, Royal IHC now has the knowledge to engineer the required solution once a client comes forward. This includes a mining vessel concept design.

Deepsea mining requires a full mining value chain to take off: the right licences and permits, deposits, the harvesting technology (vehicle, transport system, mining vessel), processing and refining of the materials and the right logistics. Over the past twelve years, Royal IHC has been developing an integrated deepsea mining solution, comprising a crawler and riser system as well as mining vessel designs to harvest polymetallic nodules from water depths of up to six kilometres.

SWZ|Maritime spoke to De Jonge and his colleague Wiebe Boomsma, Manager R&D at Royal IHC, to discuss the deepsea mining solution developed by the company. The first three articles looked into the deepsea mining landscape, the riser system and the collector. In this final article, we look at what is needed above water as well as economic feasibility. When it comes to deepsea mining, the operation above water is often underestimated. ‘You are in the middle of the ocean and that ship more or less has to stay there,’ stresses Boomsma. ‘How do you deal with the crew, supplies, transporting the harvested materials? You will need a bulk carrier a week, so you also need to transfer the load at sea.’

Wouldn’t a platform be easier?

‘We are still thinking about a ship,’ says Boomsma. ‘You need to be self-sufficient, you can’t count on external help. When something happens, you need to be able to sail to safety. The ship is also part of our focus. It will have to operate on dynamic positioning (DP). How much of such a ship or its parts would we be able to supply?’

So is the ship important for IHC?

‘To look at the movements of the riser for example, you need to know what ship you have. You need some sort of concept, which IHC has developed,’ says Boomsma.

‘A ship like that is filled to the brim,’ says De Jonge. ‘We are now talking about a concept design for a mining vessel of 260-270 metres in length, but it is really loaded with equipment. You need to put the five kilometres of pipes somewhere, just to name one. Storage and handling equipment for 50.000 tonnes of ore to name another.’

A ship like that is filled to the brim

Processing will have to be done on land. Such an installation would simply be too big to place on board a ship. Of course the success of deepsea mining is linked to the mining industry on land. To extract the resources from nodules, new metallurgical processes and perhaps new processing facilities are needed. So deepsea mining is also dependent on developments on land.

De Jonge: ‘The next step should be a system integration test of the harvesting crawler and the vertical transport to the ship. Although it is called a test, this is not simple and cheap by scraping together some equipment from the backyard. Most systems will have to be dedicatedly built or adapted and to a 1:1 scale. As you can imagine this will be at significant costs.’

So what is needed to make deepsea mining happen for real?

‘First of all, the legal framework needs to be adopted by the ISA, this will attract the required financial interest and other partners, like the processing industry in the mining value chain. Second, partnerships between mining industry, offshore operators, equipment suppliers and other stakeholders will be developed, because there is no single company who can do this on its own. All these partners need to be highly involved and bring offshore expertise and skills. This is not an adventure for the quick and easy, determination and skill is essential,’ stresses De Jonge. ‘You need someone who knows what it is like to operate at sea. You will not be able to launch this with someone who just gives you a bag of money and says do it.’

‘We go to the level: if there’s an assignment, we can engineer it,’ says De Jonge. Boomsma adds: ‘The sting will be out by then. We have first looked at what we find most difficult and what poses the greatest risk and found solutions for this. This gives us the confidence to start working with it at the moment a customer comes forward.’

De Jonge: ‘We master the fundamentals. We haven’t engineered a system in detail. That also gives us room to incorporate the customer’s wishes into the final product. That is also how we often sell a ship. Once the signatures are in place, we start to engineer and work out the details. And then you’re really talking about 100,000 hours of engineering.’ So it is really just waiting until a knowledgeable client is willing to take the plunge whether or not driven by a higher demand for raw materials or the energy transition.

Once the signatures are in place, we start to engineer

Of course the goal for IHC eventually is to sell the technology developed. ‘In terms of economic feasibility, there are five or six parties working on it in Europe. We have always said that there is room in the world for five or six operations with two to three ships each,’ says Boomsma.

You need at least two ships to make it interesting

‘An operation is not necessarily one ship. You have to supply a certain amount of ore to be interesting so that a facility is built to process it. If you start looking in that chain, you need at least two ships to make it interesting.’ ‘The plant could be located anywhere as costs for transport are low enough. It is more interesting to select a spot that can supply either cheap or green energy depending on priorities,’ he adds.

Concluding the business case, De Jonge says: ‘It is a constant flow of bulk carriers of around 50,000 tonnes. All business cases are between two and three million tonnes of ore per year. You won’t be able to load a bulk carrier every week, because there will be regular weather delays and the like, so count on forty to 45 bulk carriers per year. A larger bulk carrier is more difficult to realise, because if you were to transfer the nodules every two weeks, the mining vessel would have to keep 100,000 tonnes on board. Moreover, the transfer would be a much longer operation.’

This is the fourth and final article in a series about deepsea mining. The full article has also been published in SWZ|Maritime’s January issue.

Other articles in this series: