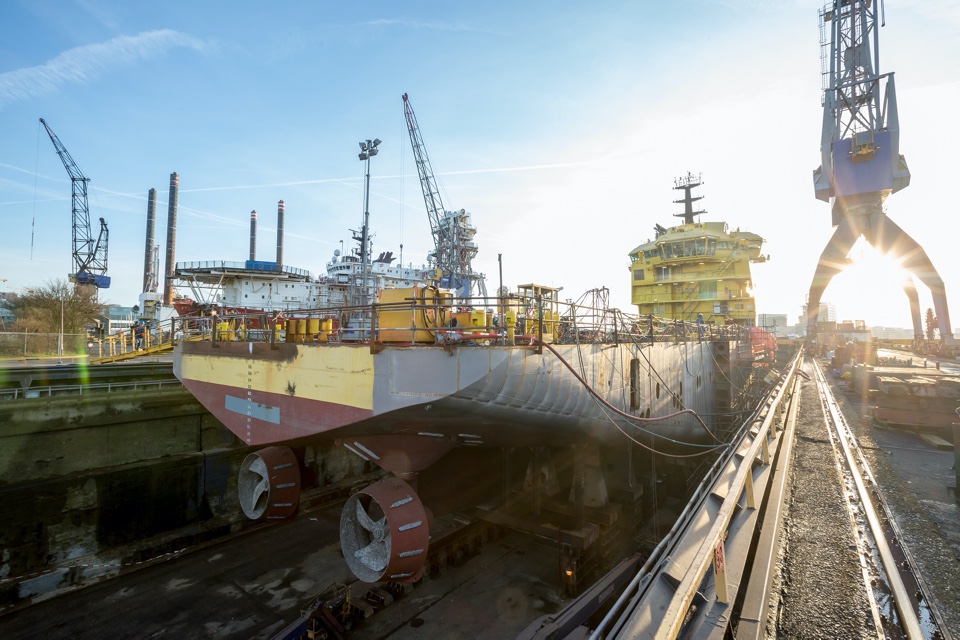 Eidsvaag, a Norwegian company that specialises in the distribution of fish feed, has contracted Damen Shiprepair Amsterdam (DSAm) to convert a platform supply vessel into a fish feed carrier. The vessel is meant to improve efficiency and sustainability in the Norwegian aquaculture industry.

‘One of the main things that made Damen stand out as a strong candidate in the tender process was their previous experience with the vessel,’ explains Vidar Eidsvaag, general manager and owner at Eidsvaag. The vessel, now renamed Eidsvaag Opal, was part of a six-vessel order Damen built for the offshore supply company, World Wide Supply, and was delivered in 2013.

The Eidsvaag Opal arrived at the yard in the final weeks of 2019, where the stripping soon got underway. The first order of business was the removal of the main deck, after which the vessel was cut in half and the sub-contractor Mammoet moved the aft section of the vessel 10 metres back in order to allow space for the fitting of the new 4.9-metre section. The project will also include increasing the beam with side boxes to give additional stability and extra cargo capacity. Each side box will be 1.2 metres long. Damen will install 35 silos as well as cargo holds. When complete, the vessel will be able to transport 2800 tonnes of feed at a time.

In addition, five new cranes and a discharger will be installed.

31 new steel sections are now being inserted into the hull and divided into sponsons and the new big bag hold. In total, 650 tonnes of new steel will be fabricated by Niron Staal and installed in the Eidsvaag Opal. 300 tonnes of redundant ship’s structure will also be removed as part of the conversion process.

In the past, Damen also converted a Damen Combi Coaster into a fish feed transportation vessel. This involved the shipbuilder shortening the vessel in order to provide the added manoeuvrability necessary for operating within fish farms. The vessel was then outfitted with 64 silos for the transportation of different types of fish food.