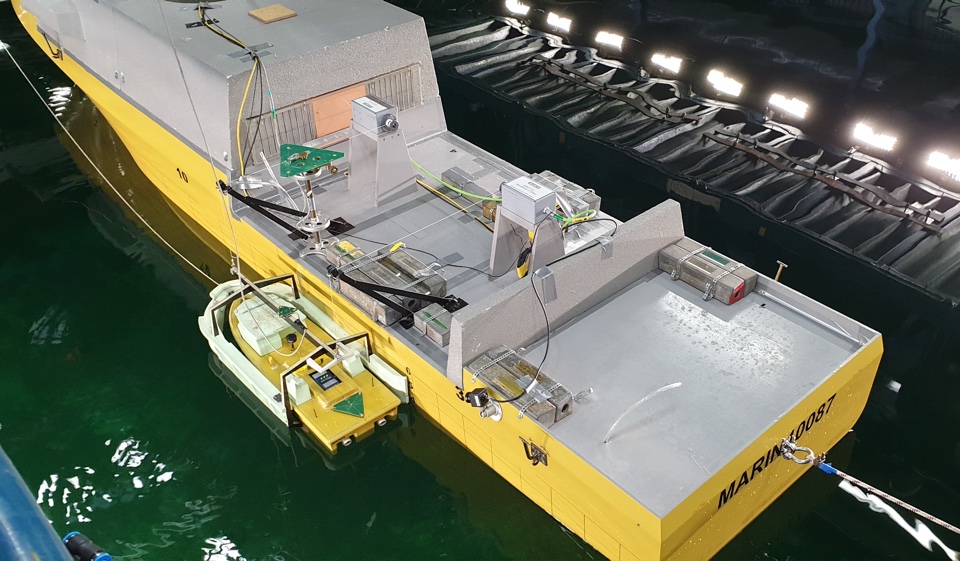 The new Dutch and Belgian minehunters will be equipped with numerous drones, including ECA Group’s Unmanned Service Vessel (USV) Inspector 125. After tank tests at the Maritime Research Institute Netherlands (Marin) in Wageningen, the USV’s launch and recovery system proved deployable in waves of up to four metres.

The contract for twelve minehunters for the Belgian and Dutch navies (six each) will run over ten years. After a three-year design period, Belgium Naval & Robotics (a Naval Group and ECA Group consortium) will move into the production phase for the ships and its drone systems, with a first delivery due in 2024. All ships are equipped with complete drone systems (toolboxes), in total containing over a hundred underwater, surface and aerial drones fully dedicated to mine countermeasures.

The mothership will have one port and one starboard Launch and Recovery System (LARS) located slightly aft of midship, close to the ship’s centre of gravity. Each LARS consists of a pivoting A-Frame davit with the Inspector 125 USV, weighing up to eighteen tonnes, housed in a floating cradle. It allows the simultaneous launch of two USVs with maximal safety.

In August 2019, the first tank tests were carried out at Marin’s facilities with a scale model of the ship’s hull and propulsion system under calm sea conditions. The first objective was to confirm and fine-tune computational fluid dynamic predictions made for speed and to validate the overall hull drag and propellers efficiency. The second objective was to assess interactions between the hull and propulsion system in order to estimate the total propulsion power of the ship.

The second test run that has now been completed, was to test the operation of USVs with the developed LARS in harsh maritime environments. The tests were conducted up to sea state 5/6 (significant waves height of four metres), and with incoming waves from all directions (including leeward of the mothership).

‘This success is an important milestone in the program and towards the implementation of a new way to conduct our minehunting activities that will be more efficient and safer for our crews,’ says Claude Bultot, the Belgian Program Director. ‘We are looking forward to the next steps together with the Dutch navy and with our industrial partners from Naval Group and ECA Group.’

The next series of tests will take place in February and will assess the cradle handling dynamic aspects.