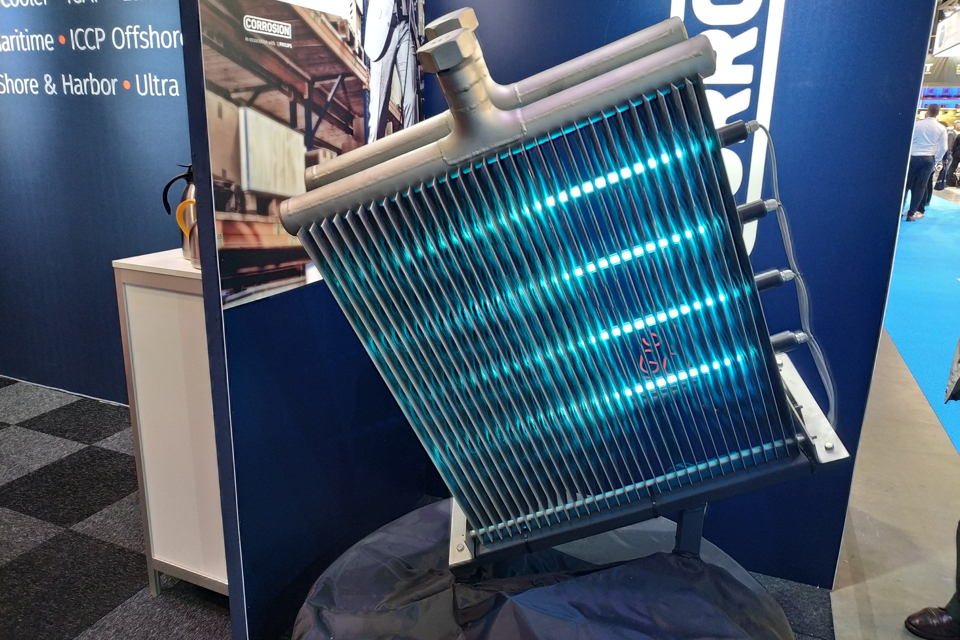 Fouling is not just a problem on a ship’s hull, but also inside the ship. To deal with this problem inside a ship’s cooling system, Corrosion has launched the UV-C Cooler. ‘UV light is not a new kind of technology to kill micro-organisms, but it is the first time that it has been applied in this way in the maritime industry,’ explains Robert Stoop, account manager at Corrosion.

Corrosion supplies anti-fouling systems. ‘Normally, these are systems that dissolve copper by putting controlled power on it,’ Stoop tells SWZ|Maritime at maritime trade fair Europort in Rotterdam on 5 November, where the company presented the UV-C Cooler for the first time.

On its website, Corrosion explains how this conventional cathodic method works: It is ‘based on an artificially triggered voltage difference between copper anodes and integrated steel plate cathodes. As the copper dissolves into the seawater, an environment is created which prevents fouling and protects the structure. The power unit ensures that the copper anodes add precisely the number of copper particles required to the seawater.’

Over the past 2.5 years, the company has also been working on a new, non-chemical, alternative anti-fouling method that uses UV Light as an environmentally friendly alternative to ICAF (Impressed Current Anti-fouling Systems). ‘UV light has already proven itself in the market as a very clean technology capable of killing micro-organisms,’ says Stoop. ‘It is used, for example, to desinfect potable water.’

‘We decided to combine two existing technologies: UV-C light technology to prevent fouling and pillow plate technology to provide efficient cooling. So, although the technology is not new, it is the first time they are combined and used as such in maritime industry as an environmentally friendly solution,’ Stoop adds. To create the UV-C cooler, the company collaborated with Philips, which supplied the UV technology, and pillow plate manufacturer Mosman.

When working on the project, Corrosion discovered traditional box coolers were not suitable for use together with the UV lights. Stoop: ‘In a way, we had to apply “reverse engineering” to find out what kind of box cooler we needed to build in order to make it suitable for UV light. This is how we came to work together with Mosman to help us develop the cooler.’ ‘Important in the development of this cooler was that the UV light covers everything. No shadow. The light should reach everywhere, as it were. And the coating on the cooler had to be UV resistant.’

The resulting cooler is made of coated steel for improved effectiveness and to prevent galvanic corrosion. It offers protection against fouling in freshwater, seawater, and even stagnant water in the box cooler sea chest.

Placing a UV-C Cooler on Board

‘To place the UV-C Cooler on board a ship, the ships needs to have space in a sea chest. From there, placed in the seawater, the Box Cooler can cool down closed cooling circuits used for engines, generator sets, auxiliary systems and Fire fighting pumps for example. Due to the higher temperatures in this area, normally a lot of fouling would occur, which will be prevented by this system with the UV light.’

The system is suitable for both retrofit and new build projects because each cooler is built to the required size. The product is easy to install in a dry dock. When compared to cathodic anti-fouling systems using power, the UV-C Cooler is also energy efficient. The lights need only a very low wattage (some 37 watts according to Stoop). A patent for the system is pending.