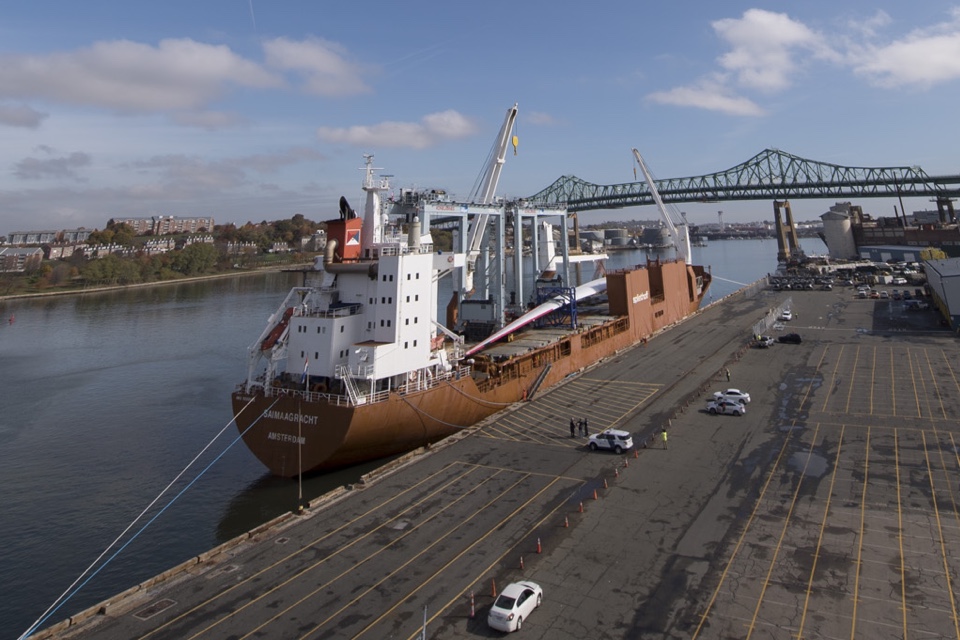 Testing of the world’s most powerful offshore wind turbine is in full swing. While GE’s first prototype of the twelve-megawatt Haliade-X has just produced its first kilowatts in Rotterdam, Spliethoff delivered a 107-metre blade in Boston where it will undergo a durability test to see if the mega blades can withstand 25 years of operation at sea.

Serial production of the twelve-megawatt (MW) Haliade-X is expected to start in the second half of 2021. GE has already secured the first orders for its new mega turbine with deliveries planned for the 120-MW Skip Jack and 1100-MW Ocean Wind projects in the US and the 3600-MW Dogger Bank offshore wind farm in the UK.

In preparation of these first projects, the Haliade-X is currently undergoing extensive testing. On 5 November, Spliethoff delivered a Haliade-X blade measuring 107 metres at the Wind Technology Testing Center of the Massachusetts Clean Energy Center (MassCEC) in Boston, where it will undergo a series of fatigue tests. Among other tests, the blade will be moved millions of times over the period of a few months to validate that it can withstand more than 25 years of operation at sea.

Meanwhile, the first prototype is up and running at the Sif terminal in Rotterdam and just produced its first kilowatt. ‘This is a critical achievement for our whole team, bringing to fruition our vision and all the hard work put in place,’ commented John Lavelle, CEO of Offshore Wind at GE Renewable Energy, on the new milestone. The 107-metre Haliade-X blade was shipped to Boston by Spliethoff to undergo testing at the MassCEC’s Wind Technology Testing Center (picture GE).

In addition, a second Haliade-X nacelle is being assembled in Saint-Nazaire and will soon be shipped to ORE Catapult’s testing site in the UK, where it will undergo a programme that will replicate real-world operational conditions to validate performance and reliability. In August, GE already shipped a 107-metre blade to ORE Catapult’s site to undergo a full range of advanced static- and fatigue-testing procedures to demonstrate the blade’s ability to withstand peak wind conditions.

The Haliade-X was developed to reduce the costs of offshore generated electricity. One Haliade-X 12-MW turbine can generate up to 67 gigawatt hours of gross annual energy production, providing enough clean energy to power 16,000 European households and save up to 42,000 metric tonnes of CO2, which is the equivalent of the emissions generated by 9000 vehicles in one year.

This article first appeared on Project Cargo Journal, a sister publication of SWZ|Maritime.