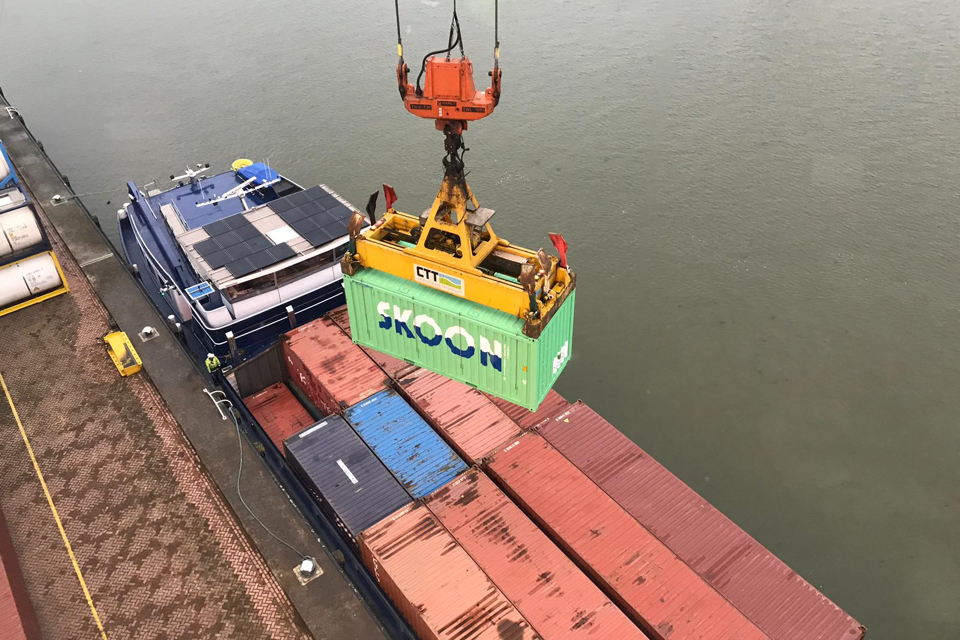 ‘We started with the idea of making shipping greener,’ says Geldermans. ‘Yet, this is also the most difficult market, because the transition from diesel to electric has only just begun. Moreover, you can often only make an impact with very large batteries.’

This led Rotterdam-based Skoon Energy to expand its horizon to land-based applications of mobile battery solutions. As Geldermans explains: ‘For many onshore applications, you can already make a major contribution to many projects with smaller, easy to handle batteries. So we decided to make the use of mobile batteries accessible to both shipping and land-based applications. Hence our focus on the service we want to provide through the online platform “Skoon Cloud”.’

This does not mean the company no longer targets the shipping industry. ‘The shipping industry just needs more time,’ states Geldermans, ‘in the long run, this will be a very large and above all beautiful market. In the meantime, we are working on various projects with shipping companies and ship owners to implement a battery. This ranges from a large battery pack for peak shaving during dynamic positioning operations to supplying electric power to dredging pumps and shorepower for river cruise ships.’

In the long run, shipping will be a very large and above all beautiful market

Bringing Together Supply and Demand

The online platform Skoon Cloud, launched on 14 October in Rotterdam, brings together supply and demand of mobile batteries and connects various markets and applications. Greener and Wattsun, two renowned battery parties, will offer their available batteries via the Skoon Cloud. In addition, various battery owners are expected to soon be using the platform to achieve a higher occupancy rate for their batteries.

Most of these will not yet be suitable for ships. Geldermans: ‘There are not that many marine approved batteries yet, but we would like to welcome those that are there to our platform.’ Although Geldermans emphasises they do not intend to become a battery owner, they did develop the Skoonbox, a battery with a capacity of more than 600 kilowatt hours the size of a 20-foot sea container.

‘This 600 kWh Skoonbox has been specially designed to be marine certified, but it can also be used on land,’ states Geldermans. ‘We have done a lot of logistics tests on board of ships and on different trucks. During these tests, we spoke to all parties involved, ranging from the skipper to the crane operator in the port and from the terminal operator to the truck driver. All to validate our technical design and especially to investigate what can and should be automated via the platform.’

‘We have developed the Skoonbox to break open the market and show what we can do. In addition, we have gained and will gain a lot of experience in the development and rental of this battery, which will all be translated into the development (ease of use and quality) of the Skoon Cloud.’

‘You can roughly divide the use of batteries into two applications: supplying energy and peak shaving,’ Geldermans continues. ‘When power is supplied to the ship’s propulsion system, it is simply a matter of supplying energy. The battery is placed on board fully charged and the ship sails electrically until it is empty. How long you can sail with a Skoonbox depends of course on many factors such as speed, current and the enthusiasm of the helmsman. The largest size inland navigation (container) vessel can sail fully electric for about four to eight hours on one battery container.’

How long you can sail with a Skoonbox depends on factors such as speed, current and the enthusiasm of the helmsman

Peak Shaving on Board Crane Vessels

Geldermans: ‘Peak shaving is attractive when there is a varying power demand, where the peak power is a lot higher than the average power. We are working on several projects with crane vessels where this is the case during lifting operations. The energy source is still a (smaller) diesel generator that runs at a constant and much more efficient speed, but the power peaks are supplied from the battery. This saves a lot of fuel and you can also use a smaller generator. Another example of peak shaving with batteries is providing shorepower when ships demand more power than the existing shore-based power connections can provide.’

Using the Skoonbox on Board

The Skoonbox will soon be available for bookings through the Skoon Cloud. When asked what is needed on board a ship to use it, Geldermans explains that first of all, there must be an electric motor for electric propulsion. ‘Apart from that, only an onboard converter is needed, which converts the battery voltage to the correct onboard voltage.’

To use a Skoonbox, a ship only needs an electric motor and an onboard converter

In terms of the ship types most likely to benefit from mobile batteries, Geldermans thinks of inland navigation vessels. ‘But water buses and ferries are also suitable for the battery change concept because of the high sailing frequency on short fixed routes.’

Together with Damen Shipyards, which has been one (and the first) of Skoon Energy’s investors, Geldermans and his colleagues are working on ‘a battery exchange system for the (small) ferries Damen Shipyards develops.’ Geldermans goes on to point out that the batteries, including the Skoonbox, can also be a solution for the shipyards themselves. A battery ‘can support the power grid when building or repairing ships at a shipyard.’

The logistics of getting the battery where it is needed, is also part of the service offered through the Skoon Cloud. This includes ports. Geldermans: ‘The logistics are one of the first things that will be handed fully automatically through the platform, this includes transport to ports or other locations.’