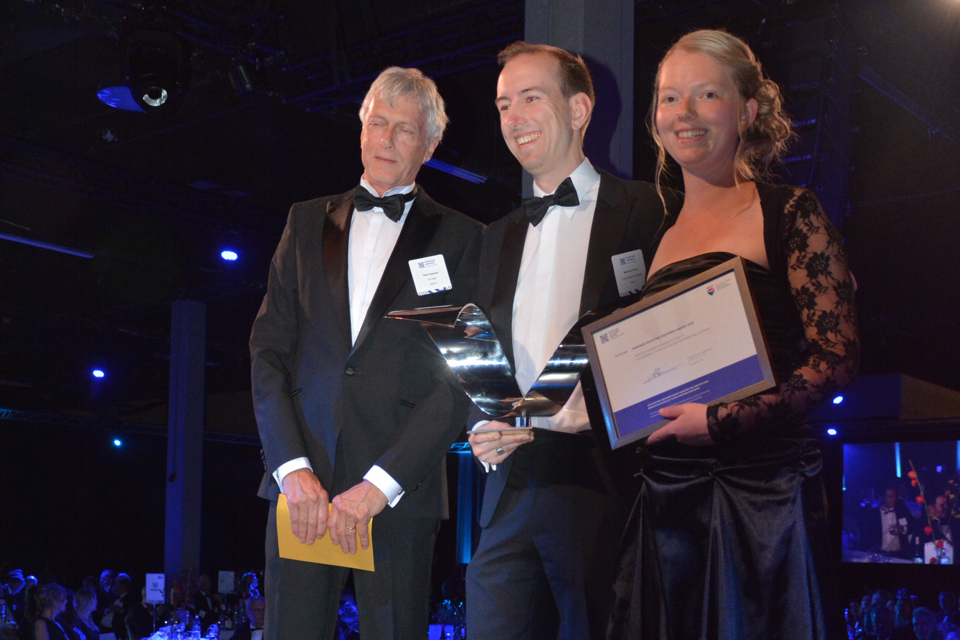 Niels de Vries, with his research into ammonia as a marine fuel, won the Maritime Designer Award at the Maritime Awards Gala last night (4 November). In his research, De Vries uses an ammonia tanker that sails on its own cargo.

The use of ammonia can significantly reduce harmful emissions in shipping. De Vries’ research on the ammonia tanker shows that ammonia can be used as marine fuel if a number of safety measures are included in the design. These safety measures include ammonia detection as well as extra ventilation in the spaces containing fuel lines.

He also concluded that the Solide Oxide Fuel Cell is the best long term option to create energy from ammonia. De Vries works as a Lead Naval Architect at C-Job Naval Architects.

De Vries was one of two nominees. His research beat that of Agnieta Habben Jansen. She developed a method for assessing, understanding and reducing the vulnerability of distribution systems on board naval vessels in the early design stage. In her method, she uses a probabilistic mathematical approach that describes the condition of the distributed systems and the probability that this condition changes after damage. The results of her method provide estimations of vulnerability very early in the design stage and allow the designer to identify the underlying driving factors. Habben Jansen is a PhD student at TU Delft.

Taking place at the “Bread Factory” (Broodfabriek) in Rijswijk, the Netherlands, on 4 November, five maritime awards were presented. In addition to the Maritime Designer Award, these were the KNVTS Ship of the Year Award, KVNR Shipping Award, Maritime Innovation Award, and the Royal Netherlands Navy (RNLN) Van Hengel-Spengler Award. Almost 900 maritime professionals, politicians and press attended the event. Honorary guest of the evening was Rotterdam’s mayor Aboutaleb.