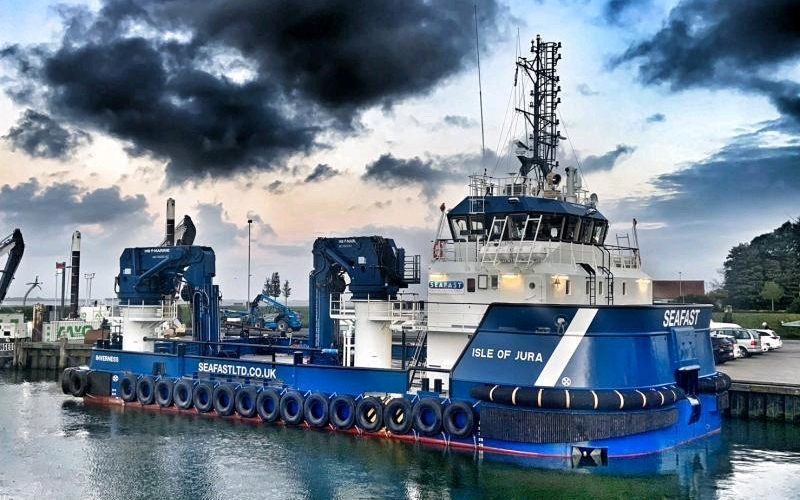 Damen Shipyards has delivered Renewables Service Vessel (RSV) 3315 Isle of Jura to Seafast Marine. The RSV 3315 is based on the Multicat design with the addition of clear deck space, DP2 and a dedicated four point mooring system. SWZ|Maritime editor Gerrit J. de Boer took a tour of the ship.

Delivery was preceded by an official naming ceremony performed at Damen Shipyards Hardinxveld on Friday, 18 October, by Mrs. Sandra Wilkie, Director of Caldive Ltd, a sister company of Seafast Marine (she is in one of the pictures below together with Jos van Woerkom, Managing Director of Damen Shipyards Hardinxveld). The vessel (yard number 571795, imo 9865697) was then handed over to the new owner, which operates from Inverness, Scotland.

The hull, built by Safe Co. Ltd. Sp.z.o.o., Gdansk, arrived at Dordrecht in tow of the motor tug Zeus on 14 April. On 4 October, the Isle of Jura commenced sea and technical trials.

The RSV 3315 can undertake all duties normally executed by a multi-purpose Multicat workboat with the addition of the features already mentioned. Furthermore, the Isle of Jura is also suited for cable laying and repair, pre-lay grapnel run (PLGR), remotely operated vehicle (ROV) support, dive support, and towage and salvage. It also has a heavy mooring system, mattress/rock bag and tidal generator installation.

The two Caterpillar generator sets, type 3512C, develop a total output of 3452 kilowatts for a maximum free sailing speed of ten knots and a bollard pull of 41.5 tonnes. The Isle of Jura has the classification: Bureau Veritas I Hull, MACH Unrestricted navigation, DYNAPOS AM/AT R DP2 with four thrusters and DP1 with fore thrusters and tunnel thruster.

SWZ|Maritime editor Gerrit J. de Boer visited the christening ceremony and visited the ship. His pictures can be seen below as well as the Isle of Jura’s general arrangement.