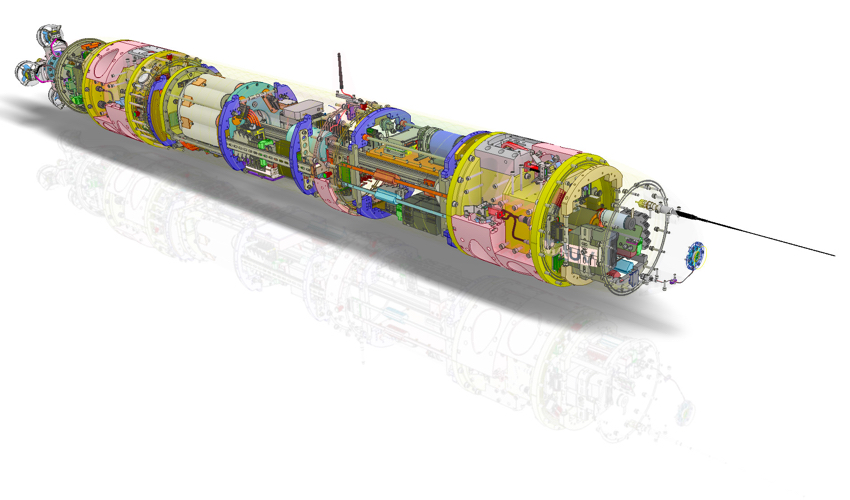 Maritime Research Institute Netherlands is designing and building a modular Autonomous Underwater Vehicle (mAUV). Goal of the project is to gain a better understanding of the challenges involved in autonomous sailing.

Autonomous Underwater Vehicles are successfully deployed for inspection, reconnaissance and underwater maintenance. Increased computational power and powerful algorithms allow an AUV to remain operational for prolonged times, without the constant supervision of humans. The AUV’s performance at sea is of importance to enable it to correctly complete its mission: if it does not know where it is when detecting an object, or if it cannot stay stationary during the inspection, the mission’s objective might not be achieved.

Marin’s goal of building an underwater vehicle is that it will serve as a research platform on which researchers have control over every aspect of the system. Initially Marin wants to examine the dynamic behaviour of a small vessel interacting with its environment and then all the aspects concerning autonomous sailing. The development of vehicle autonomy will start with simple behaviour and will be extended over time. By using the mAUV in operational scenarios, it becomes possible to learn what level of autonomy is desired. The mAUV has been designed as a test platform where parts can be altered or added without a complete redesign.

The system is designed as a test platform, and therefore needs to be flexible to include future insights. A modular setup was selected so parts can be altered or added without a complete redesign. The modules that build up the complete system are the main propulsion, tunnel thrusters, battery pack, control unit and navigational unit. Each of these modules can be replaced for future needs.

For research into the behaviour of the AUV and for the localisation of objects, the precise location of the vehicle needs to be known. An on board, inertial navigational system (INS) cannot measure absolute positions unless aiding signals and adequate sensor fusion are provided. An optical measurement system based on stereo vision and real-time detection and localisation of markers is used to measure the fixed position of the mAUV in Marin’s test basin. This location is transmitted as an aiding signal to the navigation system on board to compensate for drift.

Actuators need to provide the mAUV with the ability for fast sailing, as well as make it possible to inspect an object from all possible positions. This resulted in a set of four stern thrusters for the main propulsion. Low speed manoeuvring and vehicle control is achieved with four horizontal tunnel thrusters and four vertical tunnel thrusters.

In addition to these thrusters, a set of ballast tanks is used for trimming, and a longitudinally moving weight can be used for fast diving. A quaternion-based control algorithm, in combination with an allocation algorithm, has been developed to steer all these degrees of freedom during fast sailing and hovering. Uncertainty has been explicitly included in this design so that the control performance can increase when we learn more about the dynamic behaviour of the system. Until then, it will operate with lower performance, but it is guaranteed to be stable when facing unknown (model) dynamics.

The mAUV has recently been assembled and integration tests have been performed. Subsequently, the mAUV has been tested in the Seakeeping and Manoeuvring Basin to examine the limits of its performance. Watch a video of the mAUV in action below. The results of the basin tests will be used to improve its digital twin. These experiments will already teach Marin’s researchers what the interaction between the system, the control and the environment will be.

Practical use cases for vehicles like an mAUV may include both military and civilian operations. It could be deployed for the inspection of harbour walls, detection and inspection of sea mines, or act as a sea-based communication system. These scenarios will be tested in more detail in future model test campaigns.

Source: Marin Report Magazine 127. We thank Marin and authors Bas de Kruif, Egbert Ypma and Hans Cozijn for their permission to re-publish their article on swzmaritime.nl.