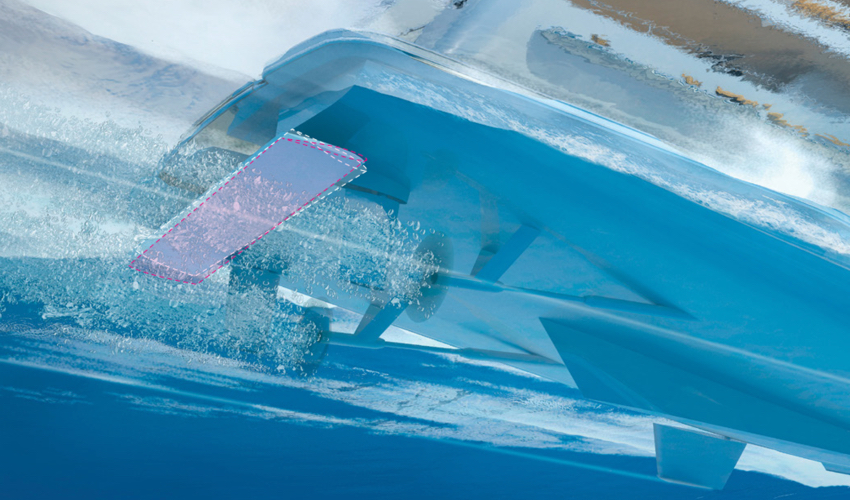 Hull Vane, the company behind the product with the same name, has launched new versions of its ‘underwater spoiler’ for ships. The fixed hydrowing that is placed below a ship’s stern to save energy and improve seakeeping, is now also available in a dynamic and composite version.

The Dynamic Hull Vane is an actively controlled version of the patented Hull Vane, which acts as a pitch stabiliser. It was developed in cooperation with Naiad Dynamics, a company that specialises in roll stabilisers, thrusters and active ship ride control systems. This version of the underwater wing has been developed with medium-speed displacement ships such as super yachts and workboats in mind.

Mr. Bruno Bouckaert, Hull Vane BV Sales Director comments: ‘Since its introduction in 2014, the Hull Vane – essentially an “underwater spoiler” – has been increasingly applied to reduce the resistance and motion of ships. Ideal applications are ships that combine a significant displacement with a relatively high speed, such as superyachts, passenger ships, naval ships, coastguard vessels and fast offshore supply vessels.’

‘In addition to reduced resistance, the static Hull Vane provides a reasonable element of pitch damping, enhancing the comfort onboard by reducing vertical accelerations. Vertical accelerations cause the continuous feeling of being alternatingly heavier and lighter, and are a main source of seasickness. The pitching motions are also a complicating factor in manoeuvres such as helicopter landings and the launch and recovery of daughter craft,’ Bouckaert adds.

Goal of the collaboration was to design a simple and maintenance-free mechanism combined with control technologies. The resulting Dynamic Hull Vane is identical to the passive one below the waterline and adapted from Naiad’s proven active T-foil or fin stabiliser designs above the waterline. All the parts requiring maintenance are able to be mounted inboard.

With the Dynamic Hull Vane off, the ship has the benefits of the passive Hull Vane: more speed and range, less wavemaking and a quieter vessel. When the sea is rough, operators simply switch it on and the ship feels as if it has active suspension: less pitching motion, less vertical acceleration, and less slamming. This is achieved because the Dynamic Hull Vane can rapidly alter its angle in response to hull pitch changes. The result is actively controlled efficiency and comfort.

The Dynamic Hull Vane will make its first public appearance at Naiad Dynamics’ stand at the Monaco Yacht Show, which takes place from 25-28 September. Bouckaert notes that application discussions are already underway with some of the world’s most renowned superyacht builders.

At the same time, Hull Vane has announced it will soon be constructing its first hydrowing built of carbon composite for 45-metre superyacht Project Adur. While the main driver of this choice of material was weight saving, it also offers unprecedented freedom of shape. The result is a three-strut wing, which has not a single straight line in it. Project Adur is currently under construction at Hakvoort Shipyard for delivery in 2021.

The Hull Vane is available in different configurations: TT-shaped, U-shaped and X-shaped. The choice depends of hydrodynamic performance, location of struts and build cost/payback period. Computational Fluid Dynamics (CFD) is used to determine and design the right Hull Vane for a specific ship and its operational profile. The Dynamic and composite version now extend the number of options.

Hull Vane builds its hydrowings in the Netherlands. The moving parts and digital control system for the Dynamic Hull Vane will be manufactured at Naiad. So far, 21 static Hull Vanes have been delivered in the past five years. Another twenty are currently on order, both for new-build ships and as a retrofit for existing ships. An increasing number of new-build superyachts, ferries and patrol vessels have integrated the device from the start of the vessel design process.