‘If you have the con, you should listen to critical communication with other ships’ 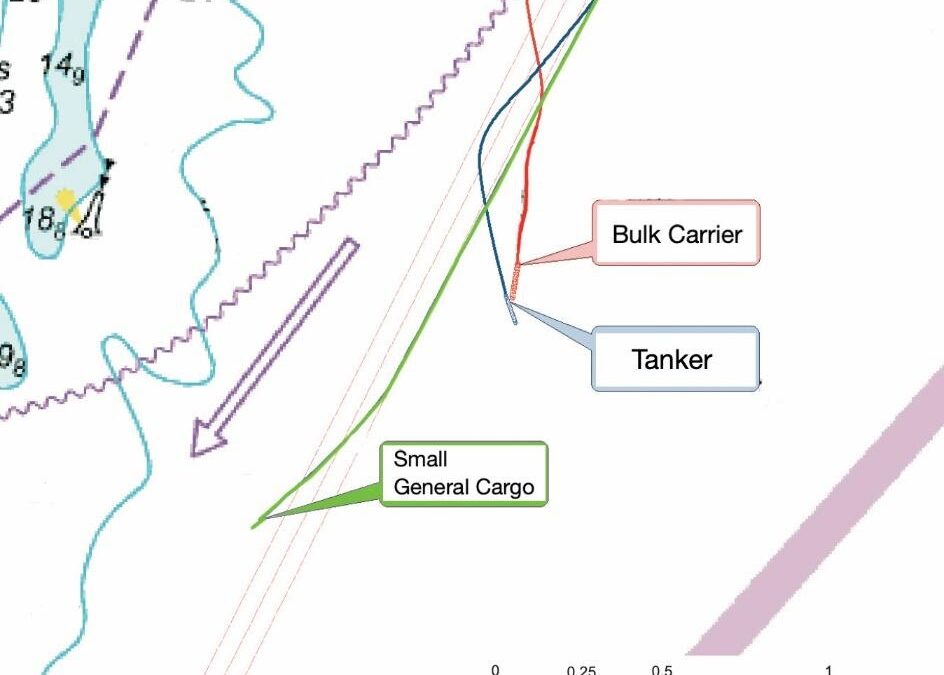 The person with the con of a vessel should listen intently to any critical communication with other vessels, even if this task has been delegated to another bridge team member. The Nautical Institute gives this advice in its latest Mars Report, in which a collision between a tanker and bulk carrier is discussed.

A tanker was underway in darkness in a busy traffic separation scheme (TSS ) zone with the master at the con. An officer of the watch (OOW) and two able seamen (ABs) were also part of the bridge team. The master and the OOW were each at a radar and the two ABs were both keeping a lookout or at the helm as required.

Meanwhile, a bulk carrier making about 16 knots was overtaking the tanker. The two vessels were now on a converging course at a range of 1.6 nm. The tanker’s master set the engine to half ahead, giving a speed of about 13 knots, in order to increase the closest point of approach (CPA) to another vessel, a small general cargo carrier.

With the vessels now 1 nm away from each other and still on a relatively steady bearing, the master on the overtaking bulk carrier became concerned by the small CPA to the tanker. He asked the OOW to contact the tanker’s bridge team via VHF to clarify their intentions. As the bulk carrier approached a narrowing of the traffic lane, the master reduced the engine setting to half ahead. At about the same time, the tanker’s master also reduced speed and switched to manual steering with one of the ABs at the helm.

Relying on the OOW, the bulk carrier’s master decided to alter to port to pass down the tanker’s port side. Having completed a trial manoeuvre on the ARPA, he instructed the helmsman to put the helm to port. The bulk carrier was now about seven cables from the tanker. The bulk carrier came around slowly to a heading of about 170° in a series of smaller manoeuvres that went unnoticed by the tanker’s bridge team.

The bulk carrier’s master was now at the forward bridge windows on the starboard side of the bridge to monitor the tanker visually. The tanker’s master continued to monitor the small general cargo vessel ahead, which was now bearing fine on their port bow at a distance of 0.65 nm. Concerned about the developing situation, the tanker’s master reduced the engine to dead slow ahead. He was under the impression that the bulk carrier would pass down their starboard side, and so decided the best way to increase sea room with the small general cargo vessel, even though it had already passed ahead, would be to take a full turn to port.

Without a visual check for sea room astern, the tanker’s master ordered hard port helm to begin the full turn. He also increased the engine setting to slow ahead. The bulk carrier was now only 0.42 nm off the tanker’s port quarter.

Meanwhile, the bulk carrier’s master was also surprised to see the tanker altering rapidly to port and across his vessel’s bow. The two vessels were now just 655 metres apart when the tanker steadied on to a heading of 172°. Unsure of what the tanker’s master intended to do, the bulk carrier’s master ordered the helm hard to starboard. As the distance between the vessels continued to reduce, he changed his mind, first ordering the helm hard to port and then finally hard to starboard.

The vessels were now too close and a near parallel collision was inevitable. The general alarm was sounded on both vessels. After contact, the vessels remained immobile alongside each other for about an hour. Then, the tanker manoeuvred away. Neither vessel required assistance to make for a port of refuge.

The official investigation found, among other things, that the tanker master’s reaction times and decision-making ability were possibly reduced, as indicated by his omission to check for sea room before the port course alteration. The contributing factors that led to this reduced ability were the time of day and possible fatigue of the master. This was his first transit of this high traffic area, so mental loading may also have played a role a role.

In addition to the advice given above, The Nautical Institute stresses that long-range scanning of vessel movements via radar is preferable to last minute VHF communication for collision avoidance.

This accident was covered in the Mars Reports, originally published as Mars 202128, that are part of Report Number 344. A selection of this Report will also be published in SWZ|Maritime’s July-August 2021 issue. The Nautical Institute compiles these reports to help prevent maritime accidents. That is why they are also published on SWZ|Maritime’s website.