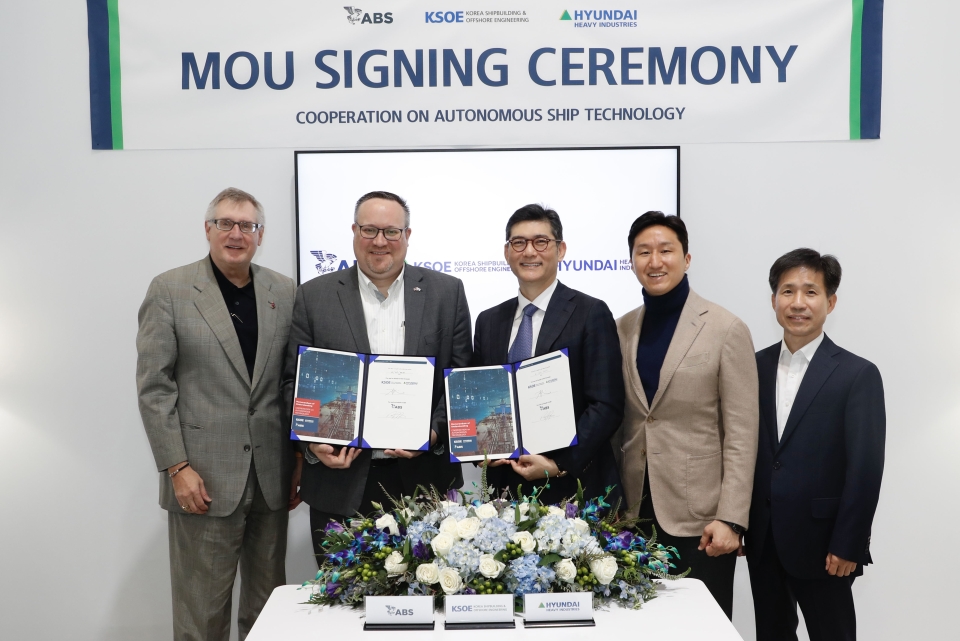 ABS and HD Hyundai have signed a memorandum of understanding (MoU) to continue working together on autonomous projects. Together they want to expand the development of autonomous navigation technology into critical vessel machinery and safety systems.

ABS and HD Hyundai are coordinating joint development projects (JDPs) to begin in the first quarter of 2023.

‘This is an exciting time for innovation and technology breakthroughs in maritime, and we are looking forward to continuing to evolve industry solutions with HD Hyundai to drive more efficient operations and advances in safety, addressing the challenges of today and those in the future,’says Christopher Wiernicki, ABS Chairman, President and CEO.

The scope of the MoU builds on the previous Strategic Framework Agreement that the companies signed at the 2022 CES. Under that agreement, ABS worked with HD Hyundai subsidiaries, Avikus and Korea Shipbuilding and Offshore Engineering (KSOE).

There were several major achievements including the demonstration of technology developed by Avikus, enabling the 180,000 m3 LNG carrier, Prism Courage, to sail in autonomous mode, under direct supervision, for roughly half of its voyage across the Pacific Ocean.

‘The Prism Courage voyage was a milestone for the entire shipping industry and demonstrated the potential of artificial intelligence and autonomous functions to contribute to safe navigation at sea,’ states Wiernicki.

Ki-sun Chung, President and CEO of HD Hyundai, adds: ‘Through this agreement with ABS, we expect to further advance autonomous vessel technology that will support autonomous engine room operations as well as safety management.’