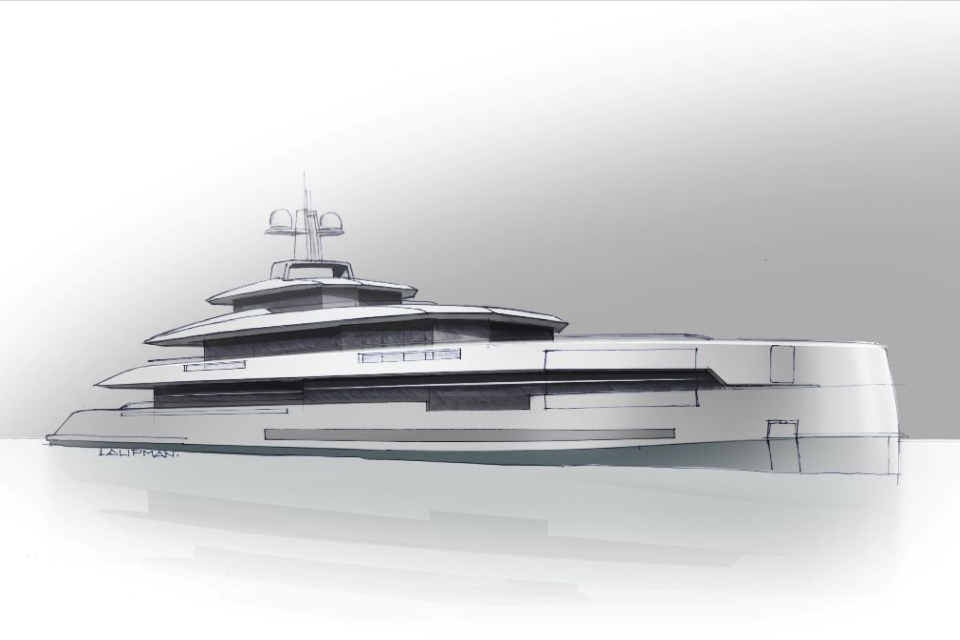 Heesen is one of the few shipyards in the world specialising in lightweight aluminium yacht construction and was the first to adopt the ultra-efficient Fast Displacement Hull Form – the revolutionary concept devised by van Oossanen Naval Architects, which reduces fuel consumption by up to twenty per cent.

At 57 metres, the yacht has an internal volume of 920 GT. The owners of YN 20857 are former Heesen clients. Frank Laupman of Omega Architects has been tasked with the design of the exterior lines of this new project, while Cristiano Gatto Design is responsible for the interior.

A draught of just 2.3 metres will allow Project Setteesettanta to cruise in shallow water. The yacht’s lightweight aluminium construction, combined with its advanced hull design, allow for the installation of two compact and fuel-efficient MTU 16V2000M72 (1440 kW) diesel engines, which are very modest powerplants for a yacht of 57 metres and 920 GT.

Project Setteesettanta will reach a top speed of 18 knots, with a transatlantic range of 3900 nautical miles at 12 knots.

Tank testing will take place at the Wolfson Unit in Southampton on December 20 and 21, and construction will officially commence with the laying of the keel in August 2023. Delivery is planned for 2026.

Twelve guests will be accommodated in six large cabins. The owners have reserved the upper deck as their private haven, where the master stateroom is located forward with a 180-degree view and also enjoys private access to a huge terrace of nearly 200 m2, which can also serve as a touch-and-go helipad.

The VIP cabin is situated forward on the starboard side of the main deck, adjacent to a fully equipped gym. Four large guest cabins, two twins and two doubles, can be found on the lower deck.

An oval staircase ascends through all four decks, running back-to-back with the crew staircase for perfect space optimisation. The dining area on the main deck is located towards the stern, adjacent to the aft terrace. Thanks to wide sliding doors, this space connects with the outdoors.

The transom area is one of the key spaces on board Project Setteesettanta. Symmetrical sets of steps flank the four-metre infinity pool and lead the guests down to the swimming terrace, which features a hydraulic transformer platform for easy access to the water. With tenders and toys stowed in the forward garage behind gull-wing doors, the lazarette aft provides storage space for additional water toys.

Heesen builds custom and smart custom yachts as well as series yacht designs on spec. The Dutch yacht builder located in Oss, the Netherlands, currently has fourteen yachts in build, ranging from 50 to 80 metres, in both steel and aluminium. Deliveries run through 2026.