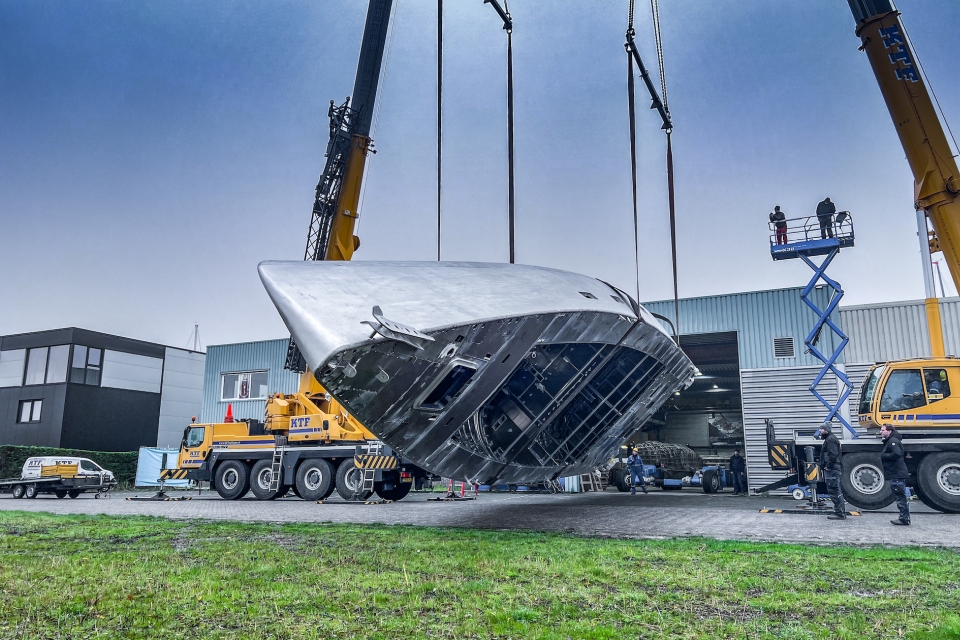 KM Yachtbuilders turned the aluminium hull of its second Pelagic 77 expedition sailing yacht at its yard in Makkum, the Netherlands, last week. Following the success of the first Pelagic 77 Vinson of Antarctica, it was decided to have a sister ship built.

The hull of the second vessel was turned exactly three years after the hull of the first Pelagic was turned. Construction had started earlier this year, in March. The sister ship will be almost identical to the first one. The difference is mainly in the engines as it will feature more modern and environmentally friendly engines.

Whereas the first found its home in South America and will focus on sailing in the southern hemisphere with charter guests, educational programmes, training and the occasional scientific group, the second Pelagic will remain in the northern hemisphere. This sister ship will be used for groups of scientists/biologists, film and video crews and for ecological purposes.

Like many of KM Yachtbuilders‘ vessels, the Pelagics are designed for high-latitude expedition voyages. Self-sufficiency, practicality while sailing and simple systems that are easy to maintain even in remote areas without specialist help are of great importance.

The second Pelagic is also equipped with all conveniences. It will have two carbon masts, so that the sail area is divided and all sail systems, such as winches and jib rollers, can still be operated manually. Inside, too, care is taken to ensure that the crew lacks nothing. A large pilothouse provides a comfortable living area and the six double cabins provide plenty of space to rest or retreat in.

Delivery of the second Pelagic is scheduled for early 2024.

Specifications of the second Pelagic 77