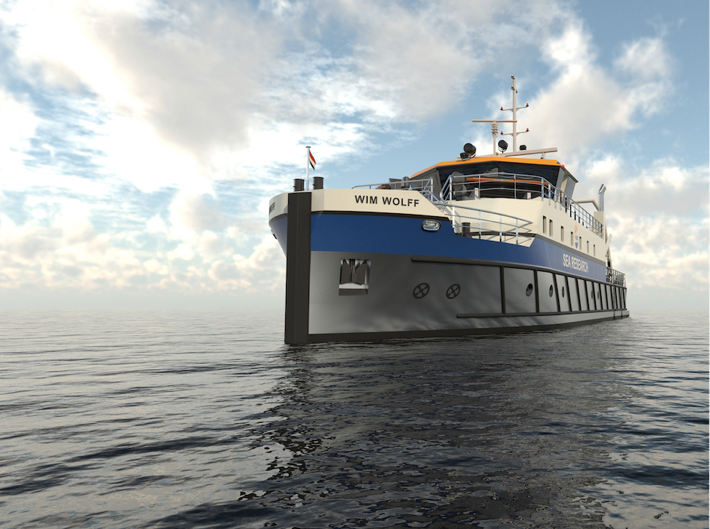 After first announcing the winning shipyard for its new flagship research vessel Anna Weber-van Bosse, there is more news regarding the NIOZ research fleet replacement. The Wim Wolff, which will replace the Navicula has left the production hall.

The RV Wim Wolff is a new shipbuilding project for the Dutch national research fleet. The fleet is owned and operated by the National Marine Facilities (NMF), a department of the Royal Netherlands Institute for Sea Research (NIOZ). The NMF fleet consists of three vessels capable of conducting research from the shallow coastal waters out into the open ocean.

The RV Wim Wolff is intended to replace the Wadden Sea research vessel RV Navicula, and with its shallow draught of 1 metre it is specifically designed for overnight voyages for research in the Wadden Sea, the Zealand delta or the coastal zone.

With a permanent crew of four, the RV Wim Wolff will offer state-of-the-art facilities for a maximum of twelve passengers, and is equipped with onboard dry and wet lab facilities. The vessel also has room for two customised lab containers on the working deck.

The RV Wim Wolff contract was awarded to Thecla Bodewes Shipyards (TBSY) in Harlingen, but the hull sections of aluminium are being built by Dutch companies N. Dijkstra Metaalbewerking in Harlingen and by Alubouw Fryslan. The superstructure sections are built by KB in Makkum, the Netherlands.

All of the individual sections have now been joined to the hull at N. Dijkstra. The bulwark (section 520) has been welded to the forecastle, and the casing for the HVAC-unit (heating/cooling) has been installed forward of the wheel house.

The rear sections 110/111 will not be added to the hull as a unit, but rather built on the hull itself. These sections require extra time and attention because the bushings for rudders and drive shafts must be installed with a high degree of precision. With the construction of sections 110/111, the hull is becoming too large to fit inside the production hall.

That is why the hull was moved forward on 21 November (see video below) to make room for the construction of sections 110/111 on the aft deck. That is why the forecastle (section 510) now extends outside the production hall. All of the piping systems are currently being installed in the hull and the hull is scheduled to be transported to TBSY in Harlingen for further construction in December 2022.

The vessel is scheduled for delivery in the second quarter of 2023.

NIOZ is also replacing the rest of its research fleet with new tonnage. The first of its three new research vessels to enter service is the Adriaen Coenen. It is the smallest ship in the new research fleet and replaces the RV Stern. It was christened and delivered in July. Next Generations Shipyards built the vessel.

On 23 November, it was revealed the Spanish shipyard Astilleros Armon will build the successor to NIOZ’s flagship RV Pelagia, the Anna Weber-van Bosse. This vessel is expected to be delivered in 2025.