VIDEO: Is this what a floating city will look like? 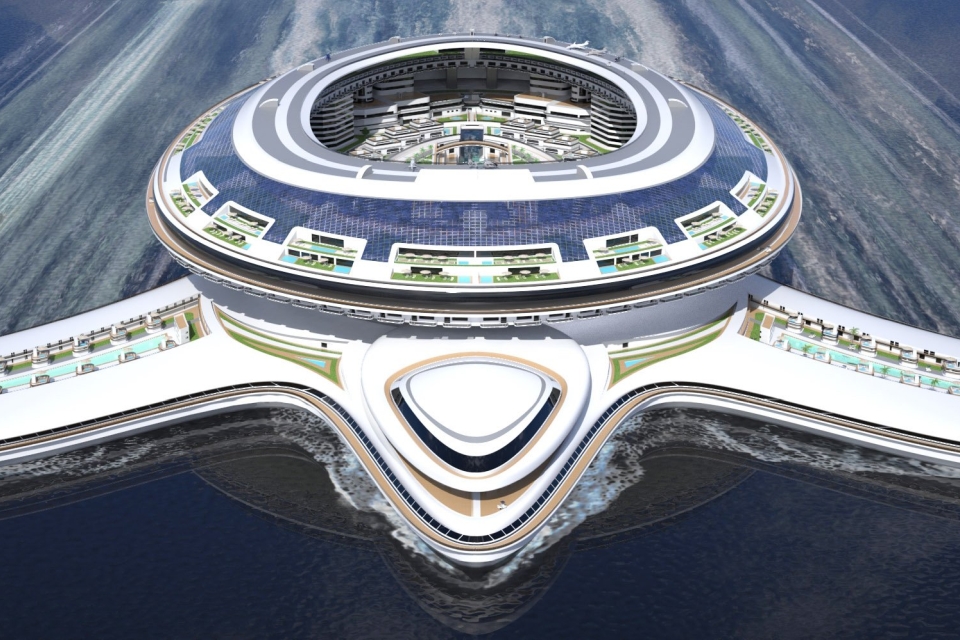 Lazzarini Design has unveiled Pangeos, the terayacht. The Pangeos is an itinerant floating city, comprising various hotels, shopping centres, parks, ship and aircraft ports, and all other facilities needed to house up to 60,000 people in the middle of the sea.

The terayacht proposal takes its name from Pangea, the supercontinent that existed millions of years ago during the late Paleozoic and early Mesozoic eras. Translating this into a somewhat futuristic expression, Pangeos extends its length for 550 metres and measures 610 metres at its widest point — the wings.

If realised, the turtle-shaped vessel will become the world’s largest floating structure ever built, according to Lazzarini Design.

With 30 metres of draught, the gigantic hull is composed of nine different bows and subdivided into several blocks.

This starts from the entrance of the port area to the main square, that extends into a wide terraced villa and subsequently leads to private houses, buildings, and rooftop terraces, with an upper “shell” zone that offers landing of various flying vehicles.

The lower space houses 30,000 cells or cluster compartments and provides an unsinkable floating solution for the basement, which is conceived to be realised mainly in steel.

Pangeos also integrates an imagined Terashipyard infrastructure that is 650 metres wide and 600 metres long, providing direct access to the sea.

The vessel is equipped with nine HTS engines. Each fully electric motor is capable of 16,800 hp and is powered by various in-board energy sources.

Pushed from a jet drive transmission, the tera-structure will be able to cruise at a speed of 5 knots. While sailing, the large wings will gain energy from the braking of the waves and Pangeos will cruise perpetually without emissions around the seas.

Further, the rooftop area is lined with solar panels, which provide part of the necessary clean energy to power the terayacht.