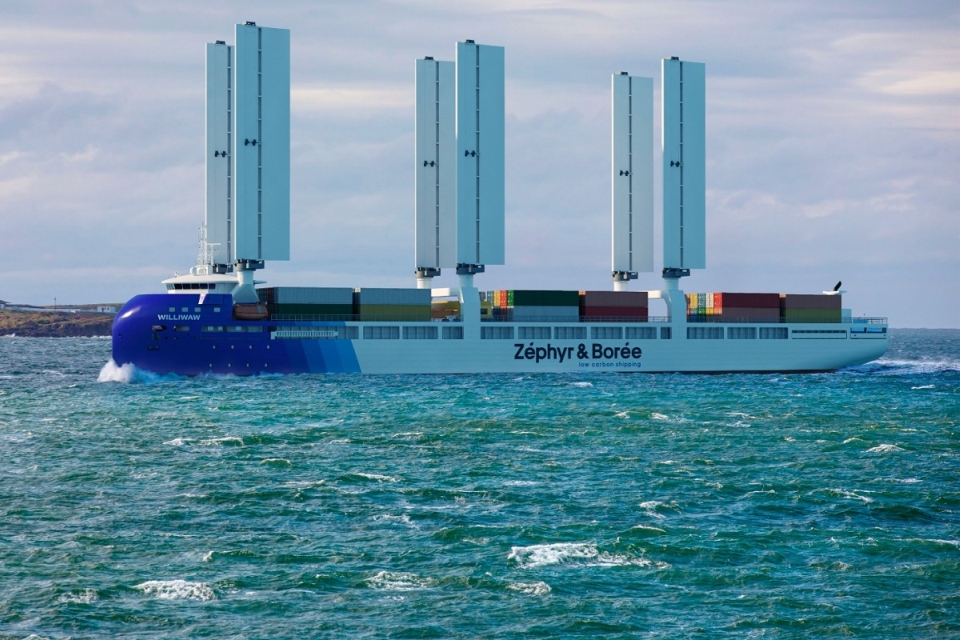 Together with Zéphyr & Borée and Blue Wasp Marine, Groot Ship Design has arranged a project proposal for a 600-TEU container vessel utilising wind as dominant medium for propulsion. The project carrying the name Williwaw represents a design able to reduce CO2 emissions by at least fifty per cent compared to conventional ships.

Groot Ship Design prepared the design over the first six months of 2022. The call for tenders for such a vessel was issued February 2022 by French based AUTF (Association of Freight Transport Users). The tender has the goal to accelerate the decarbonisation of maritime transport. At the end of July, it was announced the container lines were awarded to Zéphyr & Borée with the Williwaw design.

Williwaw means a sudden blast of wind descending from a mountainous coast to the sea. This project will make use of an optimised hull shape, specifically designed to improve sailing behaviour. The superstructure will be located forward and is designed so that the six large-area wing sails can be used with the highest efficiency.

Besides the wing sails, a methanol based propulsion system will be used. Together with other smart design features it will be the most efficient container vessel sailing at the time of completion.

In the near future it will be decided how many of, and where, to build the vessels. Expected is that at least ten vessels are required to fulfil the current transportation needs.