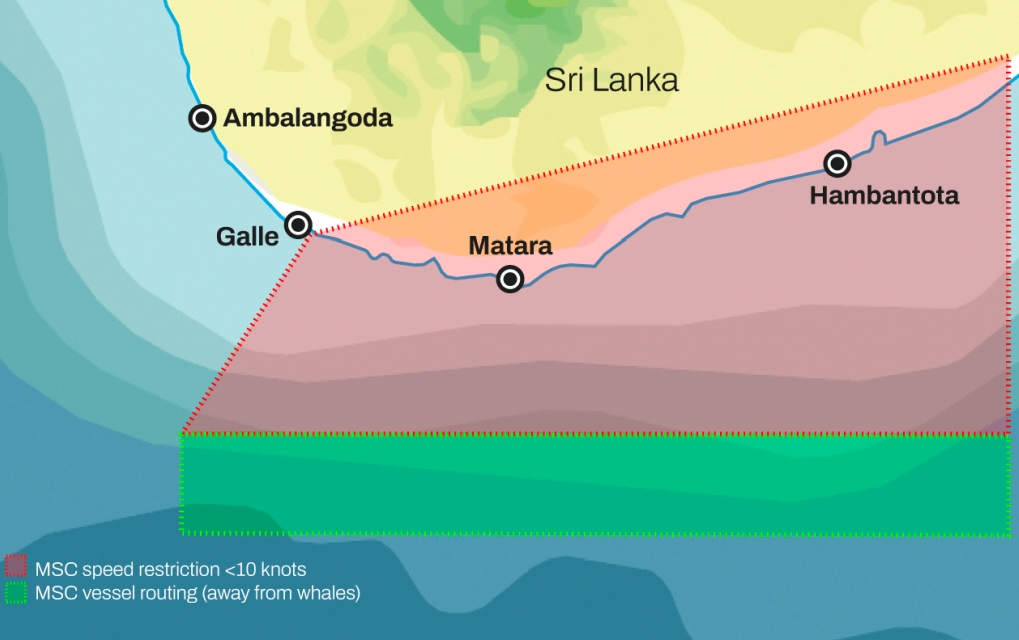 At the SMM trade fair in Hamburg, DNV and container liner MSC signed a contract to implement the new DNV Anti-Roll Assist system and ARCS (Anti-Roll for Containerships) class notation in some 100 vessels. At the same time, MSC announced it is rerouting its vessels to keep away from endangered blue whales off the coast of Sri Lanka.

DNV says that MSC is the first global liner company to install the anti-roll application and implement a ship-specific tool to avoid container losses due to parametric or synchronous rolling.

Anti-Roll Assist helps vessel captains to recognise and avoid the risk of these types of rolling. By using a ship-specific hydrodynamic database, the system can provide a risk picture for the vessel, based on its heading, speed, loading condition, and the environmental conditions.

‘The combination of factors that lead to rolling which can result in container loss can be very hard to predict,’ explains said Jan-Olaf Probst, Director Business Development Hamburg and Executive Vice President at DNV. ‘In developing the Anti-Roll Assist we wanted to give captains and crews a very clear and simple picture of the risk, based on a combination of crucial factors, including their vessel’s heading and speed. The application can also support the captain and crew in assessing if a navigational adjustment is required. Additionally, through the integration of advanced weather models, Anti-Roll Assist can be used to determine the best route to avoid extreme motions during route planning, helping to optimise ship operations.’

React in the moment

MSC will also be the first shipowner to implement the ARCS notation and will integrate the application in their onboard weather routing systems. The contract covers dozens of newbuildings, ships in operation, and vessels to be constructed, ranging in size from 1800 to 24,000 TEU.

‘We are always looking for new solutions to minimise risk and the new Anti-Roll Assist gives MSC a new tool that can empower our people both on-board and on-shore,’ says Giuseppe Gargiulo, Head of Newbuildings at MSC. ‘By implementing the new application on our vessels, captains and crew can both plan ahead and react in the moment when a potentially critical situation is identified – enhancing our safety culture.’

Anti-Roll Assist can stand alone or be integrated into other onboard systems, such as lashing computers, weather routing tools, or navigation systems, says DNV.

MSC has also announced it has modified its navigation guidance in line with the advice of scientists and other key actors in the maritime sector to help protect blue whales and other cetaceans living and feeding in the waters off the coast of Sri Lanka. The company already began in mid-2022 to voluntarily reroute its vessels passing by Sri Lanka, on a new course that is approximately 15 nautical miles to the south of the current traffic separation scheme (TSS) for commercial shipping.

MSC has followed guidance based on research surveys completed by the International Fund for Animal Welfare (IFAW), with the World Trade Institute (WTI), Biosphere Foundation, University of Ruhuna (Sri Lanka), Raja and the Whales and University of St Andrews (UK), and additionally endorsed by the World Wide Fund for Nature (WWF), to change the routing for its vessels.

Reducing the risk of ship strike by as much as 95%

Sri Lanka lies in the Indian Ocean, between Asia and Europe, and the port of Colombo is a major transshipment hub for global trade. The area off its southern coast is one of the busiest shipping lanes in the world and is also inhabited by large populations of cetaceans, meaning that these animals may be at risk of colliding with ships.

MSC says it takes various measures to protect marine wildlife, from adapting shipping service networks to keep away from designated whale breeding and feeding grounds, to reducing vessel speed and rerouting ships to avoid reported marine wildlife populations. In January 2022, MSC was the first major shipping line to re-route its ships on the west coast of Greece to reduce the risk of collision with endangered sperm whales in the Mediterranean.

The shipping company urges other ship operators to also consider choosing a more southerly route past Sri Lanka, to significantly reduce the possibility of whale strikes.