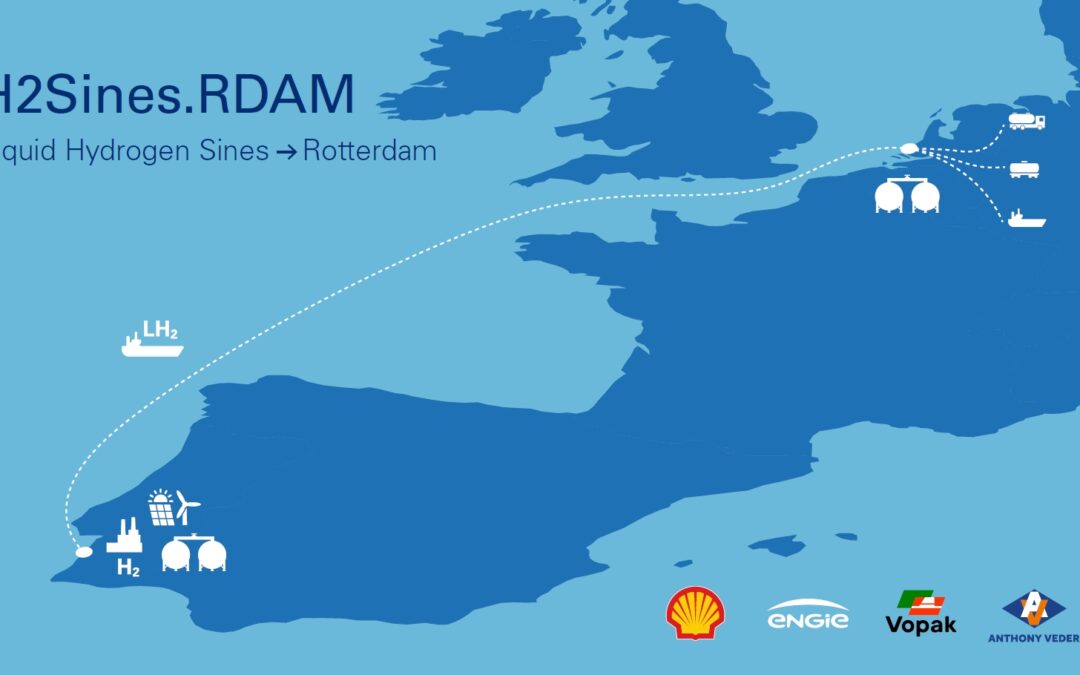 Shell New Energies NL, ENGIE, Vopak and Anthony Veder have signed an agreement to study the feasibility of producing, liquifying and transporting green hydrogen from Portugal to the Netherlands. It would then be stored in Rotterdam and subsequently distributed for sale.

The consortium envisions hydrogen being produced by electrolysis from renewable power in the industrial zone of the Sines port. Then the hydrogen is liquified and shipped via a liquid hydrogen carrier to the Port of Rotterdam for distribution and sale. The aim is to deliver a first shipment of liquid hydrogen from Sines to Rotterdam by 2027.

Key sector players in heavy duty, marine and aviation support this development as it fits well with their intention to decarbonise operations.

‘We consider liquid hydrogen as a key solution to import renewable energy into markets such as the Netherlands or Germany. We are developing the next generation of trucks which can use liquid hydrogen directly,’ says Dr. Andreas Gorbach, Head of Truck Technology and Member of the Board of Management Daimler Truck AG.

Building more certainty for customers of liquid hydrogen is needed. Policy instruments that cover cost increases for end-users can be an effective means to achieve this. Such instruments are vital to increase the scale and reduce the cost of liquid hydrogen production and have the power to drive the infrastructure development along the full supply chain.

Within the consortium, Shell and ENGIE will collaborate across the full value chain and Anthony Veder and Vopak involvement will focus on shipping, storage, and distribution. They will initially assess the potential of producing, transporting, and storing around 100 tonnes per day, with potential to scale this up over time.

Note that the project applied for IPCEI notification under H2Sines (Portuguese submission) and H2Sines.Rdam (Dutch submission).