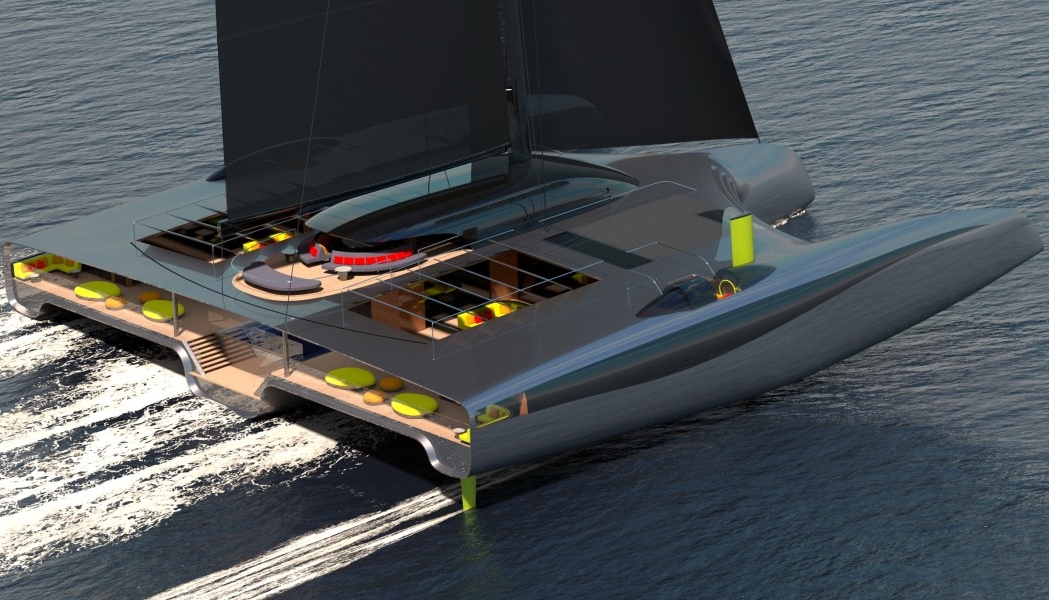 Van Geest Design has revealed the DOMUS Trimaran. At forty metres, the multihull sailing superyacht has a total interior space of 783 m2, all on one deck. In addition, it offers unlimited range with zero-emissions due to a combination of solar power, hydro regeneration and hydrogen fuel cells.

Van Geest Design and Rob Doyle Design took an approach of “why not” when coming up with the DOMUS design: ‘Just because superyachts are what they are now does not mean they should stay this way. New, never done before, seem impossible or too complicated when first suggested, are no reasons to rule it out.’

So the yacht designer opted for a trimaran design because they are faster when compared to a catamaran, easier and cheaper to build, while offering more space and comfort. DOMUS is designed to heel 2 degrees to allow the weather hull to come out of the water, thus reducing drag and increasing performance. This is impossible to achieve in a catamaran.

Catamaran systems have to be doubled for the two hulls, this significantly increase the cost of the vessel, by going the trimaran route all the systems and engineering can be in the centre hull just like a normal construction method and the Armas are kept simple, states Van Geest Design. In addition, all the rigging forces are taken by the main hull, thus keeping crossbeam structures simpler and generally the overall structure being more straight forward.

Due to the fact that the hull can be raised out of the water, trimarans generally have much more beam. This directly equates to more interior volume and deck space. With an interior space of 783 m2 all on one deck, the yacht designer claims to have ‘doubled interior space compared to 40-metre catamarans’.

With three hulls in the water at anchor, there is better damping effect, thus a more solid feeling platform and vastly reduced motions then experienced on monohulls. Due to the heel angle of 2 degrees, the trimaran also offers smoother sailing.

The designed combination of solar power, hydro regeneration & hydrogen fuel cells are said to give DOMUS unlimited range with zero emissions. An optimised system of solar power and battery storage, allows the yacht to motor during daylight hours and then transfer over to the battery system at night. This also means that DOMUS is fully silent with zero emissions while at anchor.

SWZ|Maritime’s upcoming September issue will be a superyacht special. Make sure you don’t miss it and subscribe today!