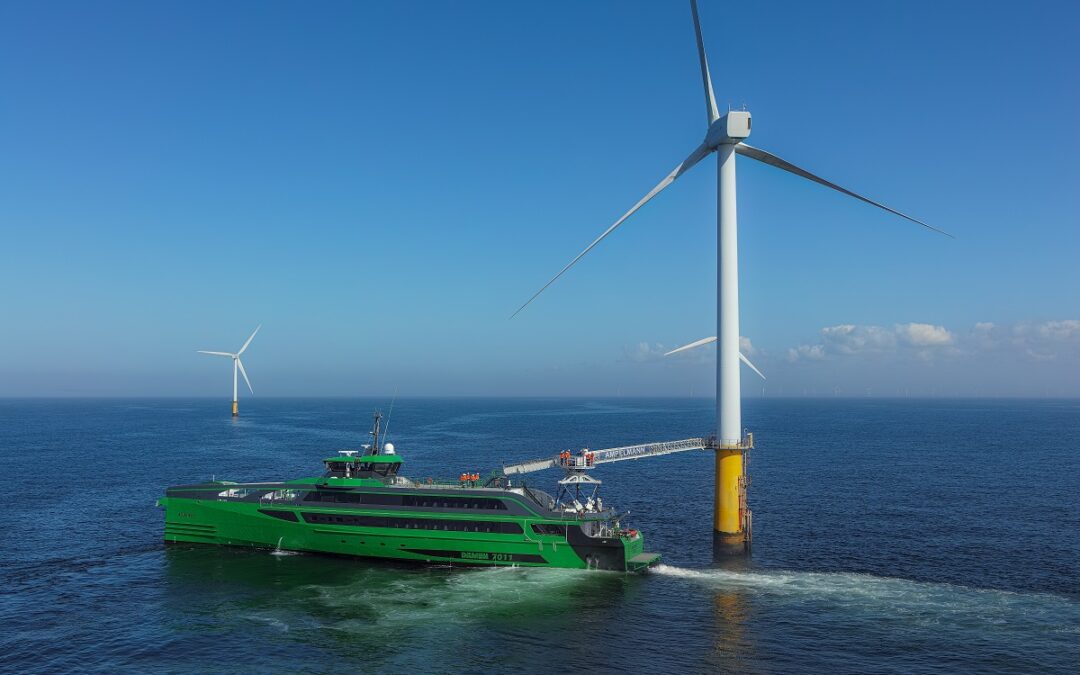 During the Offshore Support Journal Conference 2022 on 15 June, the Offshore Energy Vessel of the Year award was presented to Damen Shipyards for its Fast Crew Supplier (FCS) 7011 Aqua Helix. The first of a new class, the Aqua Helix more than fulfilled the award’s criteria of delivering both innovative design and efficient operation.

The 74-metre vessel is designed to be a fully-integrated, offshore crew supply solution capable of not only carrying 120 personnel in comfort, at speeds of up to 40 knots, across a wide range of weather and sea conditions, but also transferring them safely from the vessel to their places of work by means of a dedicated Ampelmann S-type gangway.

This required the integration of a number of cutting edge technologies. These include Damen’s own Axe-bow design to cut through waves with minimal accelerations, together with a specially designed VEEM gyrostabiliser to maximise the stability of the vessel, especially when stationary, and dynamic positioning provided by Kongsberg.

Finally, vital to the performance of the vessel is Ampelmann’s electric S-type motion-compensated gangway, which in addition to its superior performance is fully integrated with the hull structure so as to maximise strength while minimising weight. The interior also features design and technological innovations that together ensure that personnel arrive feeling well-rested and ready for work.

‘We are delighted that the Damen FCS 7011 Aqua Helix has won the Offshore Energy Vessel of the Year award,’ said Damen’s David Stibbe, Strategy and Analytics Manager. ‘Especially as it was achieved by gaining the most votes from our fellow members of the offshore community. Our thanks go out to them for their confidence in this exceptional vessel, the result of a multi-disciplinary collaboration.’

Damen and Ampelmann have recently formed OceanXpress, a joint venture that is operating the FCS 7011 Aqua Helix out of the Netherlands offering on-demand crew change solutions in the North Sea.

The other shortlisted vessels in this category were the LNG dual-fuel platform supply vessel (PSV) Coey Viking, which was built at Stocznia Gdansk, Poland as a VS 4411 DF design and the ABS-classed, 5900-DWT PSV C Constructor, which is based on an NA312E CD VE design and was built at Tampa Shipyards, US.

Koenigsborg Vessel Conversion of the Year

Wagenborg‘s Walk-to-Work vessel Koenigsborg won the Vessel Conversion of the Year Award. This award recognises a conversion project that has broken new ground and/or significantly improved an offshore support vessel (OSV) design, build and/or operational aspect of an in-service OSV over the last twelve months.

Director for Wagenborg Offshore Edwin de Vries: ‘For us, this prize is confirmation of the successful intensive collaboration between Wagenborg and our yard, Royal Niestern Sander. Together we have developed the best possible Walk-to-Work concept using the best possible resources in the market.’

In November 2021, an existing PX121 platform supply ship was converted into the Walk-to-Work vessel within twenty weeks at shipyard Royal Niestern Sander in Delfzijl. In this period, approximately eighty employees worked on the innovative conversion of Koenigsborg, which gave an impulse to regional employment. The vessel was equipped with an additional accommodation module for forty people. Also, a motion-compensated gangway was installed to comply with all requirements. Early 2022, Koenigsborg was taken into service by Wagenborg Offshore on the Southern North Sea.

Wagenborg now has four Walk-to-Work vessels operational on the North Sea. In 2018 Wagenborg delivered Kasteelborg, a similar vessel after a similar conversion project for Shell. In 2020, the Keizersborg was delivered to another oil & gas major, also after a conversion project. Together with KNVTS Ship of the Year 2015 Kroonborg, all Walk-to-Work vessels have proven to be very successful in recent years. In addition to efficiency and logistical advantages, the vessels also have a positive effect on the environment by reducing helicopters flights significantly.

Also nominated in this category were the retrofitted Maersk Minder, a battery-hybrid anchor-handling tug supply vessel, Boskalis-owned Bokalift 2, which was converted from a drill ship into a DP2 heavy-lift crane ship. and Allseas’ Hidden Gem, a drill ship that was converted into a deepsea mining vessel.

The Bureau Veritas sponsored Offshore Renewables Award 2022 went to DEME for its service operation vessel Groene Wind. The first such vessel to be built at Cemre Shipyard, Turkey, with a small waterplane area twin-hull.

The Groene Wind ended up ahead of DEME’s offshore wind turbine installation vessel Orion, equipped with a 5000-tonne crane, and the hybrid-powered crew transfer vessel HST Ella, which was designed by Chartwell.