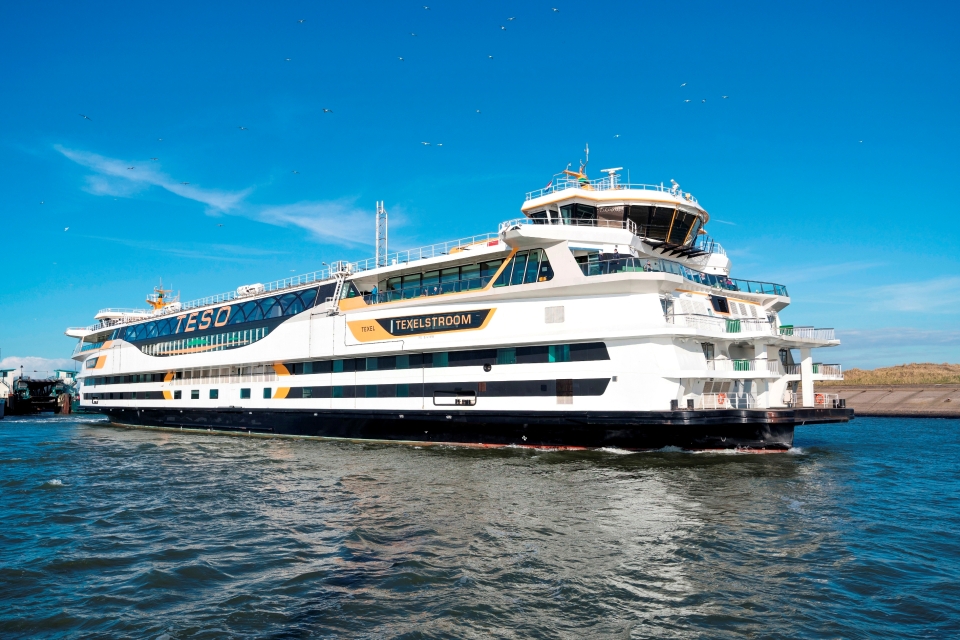 When the vertical side of the ferry Texelstroom was damaged during storm Eunice back in February, a leak in the ballast water tank prevented the ship from sailing. Because this happened at the start of a busy school vacation period, it was essential that a fast on-site solution was found to keep the downtime for the ship as short as possible.

Texelstroom sails between Den Helder on the Dutch mainland and Texel, the largest and most populated Dutch Wadden Sea island. As a UNESCO World Heritage Site, it is important that the area is protected. Texelstroom was designed with this in mind. Launched in 2016, it is one of the world’s most sustainable ferries. It is the first ferry in Europe that runs on a combination of compressed natural gas, green shore-side power and solar power generated on board.

Hydrex was asked by TESO, the owners of the vessel, to find a way to repair the damage the ship had suffered during the storm. Because no drydock was available on such short notice, the operation needed to be performed while the vessel stayed afloat. Another important factor was the timeframe. Downtime needed to be kept to the absolute minimum so that Texelstroom could get back to ferrying passengers between Den Helder and Texel as soon as possible.

Hydrex’ Technical Department proposed installing an open-top cofferdam over the damaged hull plating. This would allow the diver/technicians to access the affected area and perform the needed repairs in dry conditions.

As soon as the proposal was accepted on Wednesday evening, Hydrex put everything in motion to start the operation. At this point, they also contacted the classification society and stayed in communication with them throughout the operation. The cofferdam was constructed at the company’s fast response centre in Antwerp the very next day. Hydrex also ordered the certified steel for the new insert plate.

On Friday morning, the team arrived in the port of Texel with the cofferdam and all the needed equipment. The repair started with a detailed inspection of the damage from both sides of the hull. In consultancy with the superintendent of the ferry and the surveyor from the classification society it was agreed to install an insert repair measuring 1500 mm x 700 mm.

The team then installed the open-top cofferdam over the damage and created a dry environment in which to work. They cut away the old plating and installed the new insert. Hydrex secured the insert with a certified weld both from inside the vessel and inside the cofferdam.

Ultrasonic testing was performed by an independent inspector and the repair was approved by the classification society as permanent. On Sunday morning, the cofferdam was removed and a final leakage test was successfully conducted. This concluded the operation.

TESO’s spare ferry Dokter Wagemaker took over Texelstroom’s service while the vessel had to be repaired.

Picture (top): The ferry Texelstroom sails between Den Helder on the Dutch mainland and Texel, the largest and most populated Dutch Wadden Sea island.