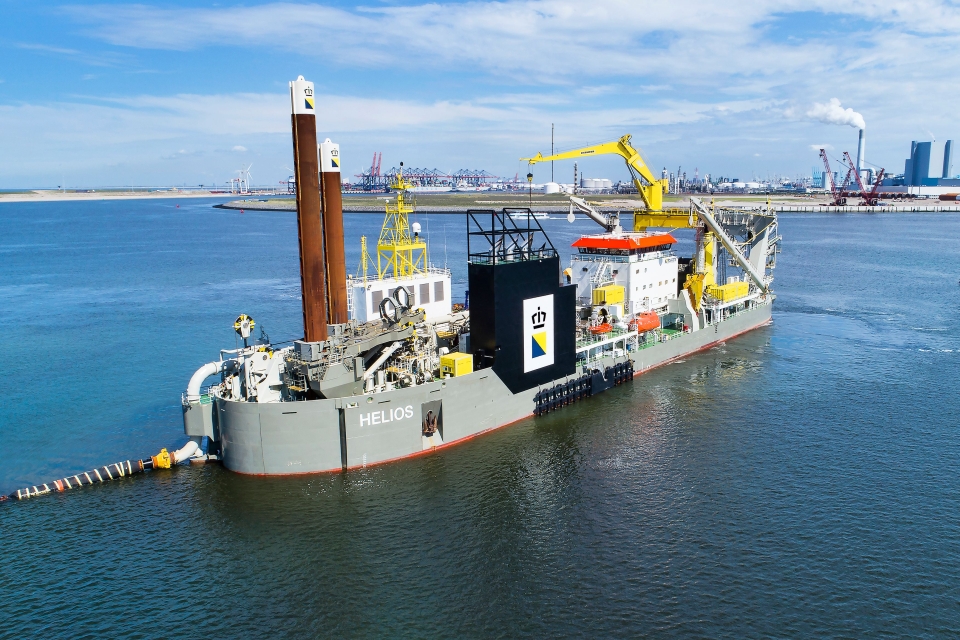 Yesterday, it was announced HAL will make a bid for all outstanding Boskalis shares. HAL values the company at € 4.2 billion. Although the investment companies has no plans to change Boskalis’ strategy or workforce, it does plan to end the company’s public listing if it manages to acquire 95 per cent of the shares.

In the Dredging & Inland Infra segment, revenue increased by over twenty per cent and the operating result by 57 per cent compared to last year. These strong growth figures came about despite Covid-19-related travel restrictions and quarantine measures resulting in operational inefficiencies, most prevalent in Southeast Asia.

The utilisation of the trailing suction hopper dredgers was strong in the second half of the year, after a relatively quiet first half due to early maintenance on the mid- to large-sized vessels. The largest revenue contribution came from projects in the Philippines, Singapore, Denmark (Fehmarnbelt tunnel between Denmark and Germany) and from the domestic Dutch market (major dike reinforcement projects such as the Markermeer dikes, the protection of the North Sea coastline and river related projects from the Dutch Flood Protection Program).

At Offshore Energy, revenue increased by 19 per cent on a 52 per cent higher operating result. The revenue growth was almost entirely attributable to the services part of the division. Both Marine Transport & Services and Marine Survey contributed to the growth, but the largest increase came from Subsea Services, in part due to the addition of Rever Offshore acquired late 2020.

Across the board, the various contracting and services activities contributed to the good divisional result. In 2021, revenue from offshore wind activities continued to increase, accounting for 46 per cent of division revenue.

Boskalis’ biggest project currently in execution is in Taiwan, where the company is constructing two offshore wind farms. Boskalis’ newest crane vessel, the Bokalift 2, will start working there in the coming months and is lined up to continue work on subsequent offshore wind projects thereafter.

Despite Ever Given, 2021 was a quiet salvage year

The Towage & Salvage division had a good year, both in harbour towage activities and salvage. For many, the combination of salvage and 2021 will be associated with the refloating of the Ever Given in the Suez Canal, but there were also dozens of other successful salvage assignments in which vessels were saved or where an environmental disaster was averted.

Nevertheless, following a number of exceptionally busy years, 2021 was relatively quiet in terms of revenue for salvage. The harbour towage activities contributed well with a substantial increase in earnings.

The order book increased modestly to € 5.41 billion (year-end 2020: € 5.31 billion). The increase was fully attributable to Offshore Energy, partly as a result of acquiring a substantial offshore wind project in the United States. With the projects in the order book a significant part of the 2022 revenue has been secured and there is a solid basis for the years thereafter.

Peter Berdowski, CEO Boskalis: ‘Looking back at 2021, we have delivered an excellent performance. Despite the still restrictive Covid-19 measures, we managed to execute our projects well and also in financial terms we can speak of a successful year. Our EBITDA has increased significantly and we have also acquired a large number of impressive projects. In addition, our financial position remained rock-solid.’

He adds: ‘2021 will go down in history for Salvage as the year of the Ever Given, the container ship that blocked the Suez Canal for just under a week. The salvage operation lasted six memorable days, which we even documented in a book afterwards. In the end, our colleagues, aided by the forces of nature with a spring tide, succeeded in refloating the vessel thereby unblocking the canal.’

Boskalis is in good shape as a company with its well-filled order book and strong financial position. The market looks favourable for the medium term as well as for the short term, although the consequences of the recent geopolitical events in Eastern Europe are still difficult to assess.

In Dredging & Inland Infra, the order book for the coming year is well filled. With the projects in hand, the fleet utilisation is expected to increase. In 2022, amongst others, projects in the Philippines, Singapore, Denmark and the Netherlands will make a significant revenue contribution.

In Offshore Energy, the portfolio is also well filled for the coming years. At Cables, the Ostwind 2 project will be the largest project in 2022. At Marine Transport & Services, a large number of transports are in the pipeline, partly due to delayed 2021 cargoes, but also due to an improving market. In Survey, in addition to the traditional markets, the strongly emerging offshore wind market is expected to contribute further. Finally, the now integrated activities of Rever Offshore at Subsea Services are expected to make another positive contribution to the annual result. The consequences of geopolitical events for the energy markets are of specific relevance for Offshore Energy.

At Towage & Salvage, the Singaporean towage activities are considered as assets held for sale. A stable year is expected for the terminals activities of Smit Lamnalco. The annual result of Salvage will strongly depend on the inherently unpredictable flow of projects and settlement results on previously executed projects.

In view of the project-based nature of a significant part of our business, it is difficult at this early stage in the year to make a concrete quantitative statement about the annual result for 2022. However, the well-filled order book does provide a solid basis for expressing the expectation that the EBITDA for 2022 will equal that of 2021.

Berdowski: ‘We look back with pride, but above all we look forward with confidence. Over the coming decades, Boskalis’ broad range of services will allow us to make a significant contribution to some of the major societal challenges of our time, including facilitating the energy transition, providing protection against the consequences of climate change, the construction of critical infrastructure and preventing environmental disasters at sea. For the medium term, the market outlook is favorable. And for the short term, too, there are many positive signs in terms of the market and our order book, although it is difficult to assess the impact of the current geopolitical developments in Eastern Europe for Boskalis.’