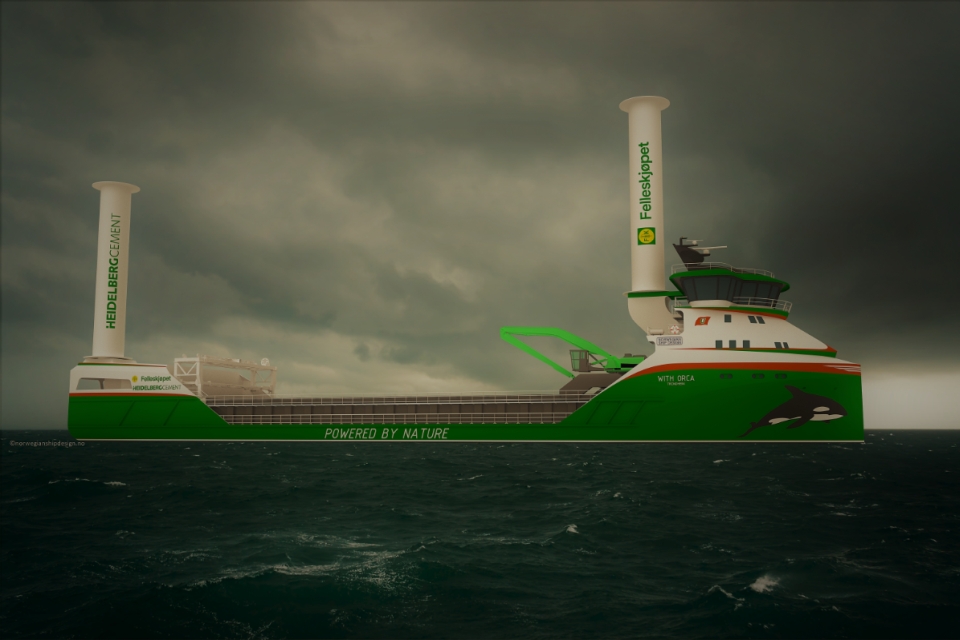 Lloyd’s Register has awarded an approval in principle to Norwegian shipowner Egil Ulvan Rederi AS for its zero-emission self-discharging hydrogen-fuelled bulk carrier, With Orca. The vessel will also be fitted with two large rotor sails.

With Orca will be fully zero-emission in all operations. The vessel is planned to enter into a long-term transport contract with cargo owners Felleskjøpet Agri and Heidelberg Cement and is to set sail in early 2024.

The ship will be powered by hydrogen, stored on board in compressed form, and the hydrogen combustion engine will be optimised for increased efficiency. The vessel will also have a fuel cell system for energy production in low load conditions. A significant part of the energy required to operate the 88-metre/5500-tonne vessel will be harvested directly from the wind through two large rotor sails. The vessel also has the ability to store excess energy in batteries.

Also read: Rotor Sails to be installed on a bulk carrier for the first time

Lloyd’s Register (LR) awarded the approval in principle (AiP) after completion of a risk-based HAZID certification. The vessel is designed by Norwegian Ship Design and the hydrogen will be supplied by Statkraft.

The vessel’s sailing route will mostly be in open waters in the North Sea, where weather conditions are ideal for wind-assisted propulsion. With Orca will combine the cargoes of Heidelberg Cement and Felleskjøpet, carrying aggregates from western to eastern Norway and grain in the opposite direction.

‘LR is delighted to have been selected for this world first project that utilises several alternative propulsion technologies,’ says Mark Darley, LR Marine and Offshore Director. ‘Through our thorough risk-based analysis we are happy to award approval in principle for the use of hydrogen as a sustainable and safe solution for vessel propulsion.’