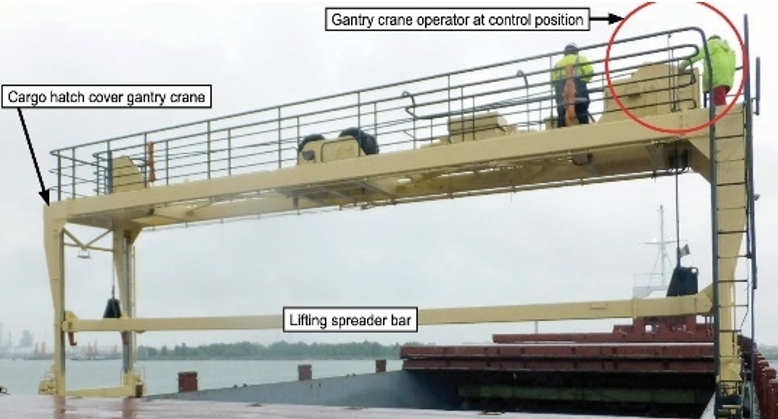 Gantry cranes, as presently configured and operated on most ships, seem a clear and present danger for crew and stevedores, says The Nautical Institute in its lates Mars Report. The Report describes how a stevedore coordinator was crushed by a gantry crane as the operator did not see him near the tracks.

A small general cargo vessel was berthed to discharge a cargo of fine coke. In the early morning five port stevedores boarded the vessel to discharge the cargo; a foreman, a stevedore coordinator, a front-end loader driver and two others. A sixth team member remained ashore to operate the discharge grab crane.

It was the role of the stevedore coordinator to liaise between the crane operator and those working in the cargo hold.
The foreman discussed the discharge plan with the vessel’s chief officer and then briefed the other stevedores. The foreman explained that the aft end of the hold would be unloaded first and informed his team that hatch covers 7 to 11 would be moved aft once the area was unloaded. The foreman then went ashore while the other stevedores remained on board.

When cargo discharge began, the stevedore coordinator directed the shoreside grab crane operator from the vessel’s port side walkway via handheld radio. To see into the hold, he climbed up the vessel’s fixed ladders and leaned over the top of the two metre high hatch coaming. The chief officer monitored the cargo operations and the list and trim of the vessel, and ballasted as required.

At one point, the gantry crane was needed to handle the stacked hatch covers. The chief officer checked that the crane’s path was clear on both sides of the main deck and then climbed up to the crane’s control position and began the manoeuvres. At about the same time, the stevedore coordinator went to check on the progress of his colleagues in the aft part of the hold, walking aft along the port walkway.

As the chief officer drove the gantry crane over hatch cover position 10, the crane suddenly stopped. He did not know why the crane had stopped, but the stevedore foreman had seen the stevedore coordinator’s head appear above hatch cover 11 on the port side and immediately realised that there had been an accident. He raised the alarm.

Advice from the Nautical Institute

Are gantry cranes a clear and present danger, as the MAIB states? In MARS reports alone, which are probably a subset of all such occurrences, six gantry crane accidents are now recorded. Apart from the present report, these include MARS report numbers 98058, 201460, 201525, 202068, 20222. From these reports, almost all with fatal consequences, the over-riding contributing factor seems to be that the gantry crane operator was not aware of the victim’s precarious position. Just as driving a motor car would never be done ‘blind’, gantry cranes should never be driven so either. Continuous track assessment should be the norm. This can be achieved by dedicated banksmen or, for example, wide-angle camera lenses positioned on the gantry legs and sending images to the crane operator. Clearly, emergency stop buttons alone are proving insufficient to eliminate fatal accidents.

This accident was covered in the Mars Reports, originally published as Mars 202201, that are part of Report Number 351. A selection of this Report was also published in SWZ|Maritime’s February 2022 issue. The Nautical Institute compiles these reports to help prevent maritime accidents. That is why they are also published on SWZ|Maritime’s website.