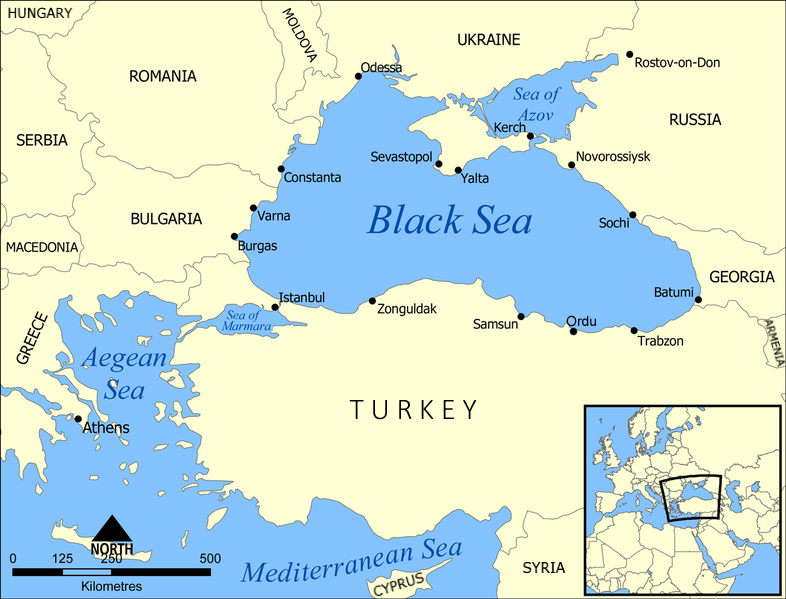 In addition to soaring oil and gas prices, Russia’s attack on Ukraine will and already has an impact on shipping. This ranges from areas where navigation is suspended and closed or damaged ports to difficulties for shipping companies sailing with Russian and/or Ukrainian crew. Trade union Nautilus says crew changeover issues may also ensue.

What we have gathered from different media so far, is that Russia has suspended navigation in the Sea of Azov. Russian ports in the Black Sea remain open for now. Ukraine’s port cities of Mariupol and Odessa, housing Ukraine’s main naval bases are under attack, causing the ports to be shut down.

The Daily Mail reports Russian tankers have blocked the Kerch Strait, leading from the Black Sea to the Sea of Azov, thereby cutting off Mariupol.

Ukraine has asked Turkey to close the Bosphorus and Dardanelles straits, which lead from the Mediterranean Sea to the Black Sean, to Russian ships, but is as yet unclear what Turkey will do with this request.

Maritime trade union Nautilus says the subject of sailing with Russian crew/under Russian authority has been brought up by several of its members recently. Nautilus says it will enter into consultations with shipowners and the government on this subject in the near future. It will also be discussed with the UK branch of the organisation and they will try to put the issue on the map internationally.

The trade union expects shipping companies may be affected when sailing with Russian, Ukrainian or mixed crews, and sailing in Ukrainian ports. In addition, Nautilus expects problems may arise with crew changeovers. The organisation adds it is ‘working hard to find solutions with employers and the Dutch government to guarantee seafarers’ safety’.

The International Chamber of Shipping (ICS) has also warned of supply chain disruption should the free movement of Ukrainian and Russian seafarers be impeded. The Seafarer Workforce Report, published in 2021 by BIMCO and ICS, reports that 1.89 million seafarers are currently operating over 74,000 vessels in the global merchant fleet.

To maintain global trade, seafarers must be able to join and disembark ships (crew change) freely across the world, says ICS. With flights cancelled in the region, this will become increasingly difficult. ICS adds that the ability to pay seafarers also needs to be maintained via international banking systems.