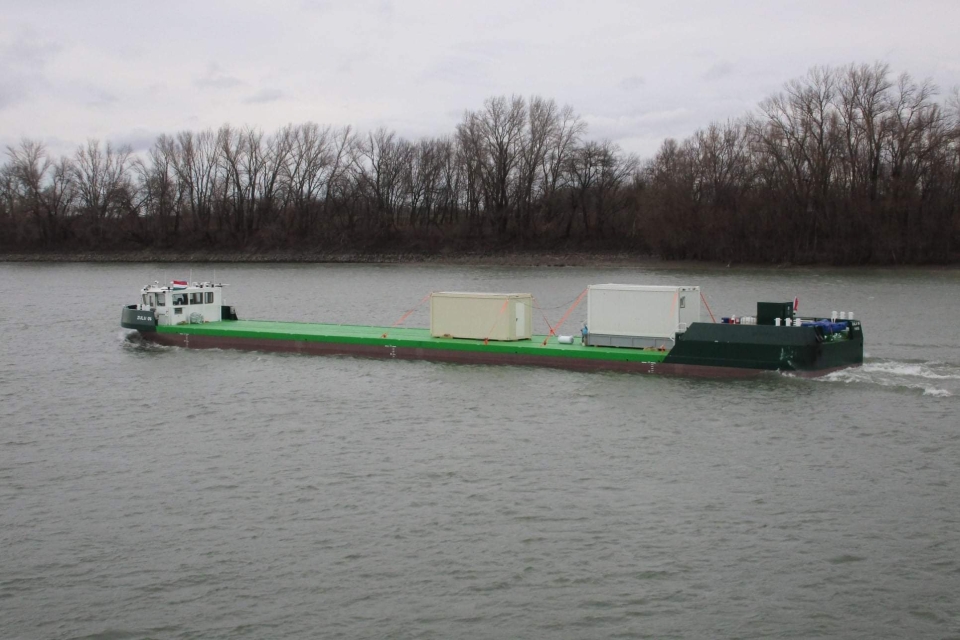 What is said to be the world’s first hydrogen powered cargo vessel has left the shipyard in Romania and is on its way to France. Once the Zulu 06 arrives in Le Havre, the hydrogen equipment from ABB and Ballard will be installed. The Flagships’ river barge is to start operating on the river Seine in September.

The Zulu 06 is a demo vessel of the Flagships project. This project seeks take zero-emission waterborne transport to the next level by deploying two commercially operated hydrogen fuel cell vessels by 2023. The second vessel is the FPS Waal, operated by Future Proof Shipping. This involves the retrofit of an inland container vessel that will operate on the Rotterdam to Duisburg section of the Rhine.

The hydrogen cargo transport vessel Zulu 06 will be owned by French inland shipowner Compagnie Fluvial de Transport, a subsidiary of the Sogestran Group. The revolutionary vessel will move goods on pallets and in containers on the route from Gennevilliers – Bonneuil Sur Marne on the river Seine.

Flagships Project Coordinator Jyrki Mikkola, from VTT Technical Research Centre of Finland: ‘We want to raise the readiness of hydrogen-powered waterborne transport to an entirely new level globally. To do that, we need to demonstrate our ground-breaking technology. Seeing Zulu sailing emission-free in the middle of Paris will be an important step for our project to reach its goal.’

The vessel will operate on compressed hydrogen produced from electrolysis, enabling not only zero-emission operations, but also creating a solid base for more local zero-emission transport, both at sea and on land. The power generation system for Zulu will be supplied by ABB Marine & Ports, with two 200 kW PEM fuel cells from Ballard. The vessel will also be equipped with a 350 kg hydrogen storage unit containing compressed hydrogen (300 bars). LMG Marin is responsible for detailed design drawings, with hydrogen provided by suppliers in the Paris region.

‘In Le Havre, we will also equip the vessel with all necessary safety and operational systems,’ says Director of Compagnie Fluviale de Transport (CFT), Matthieu Blanc. ‘Zulu will become the first zero-emission hydrogen-propelled river barge in Europe. The Flagships project makes it possible to work collectively and double the efforts to position river transport as a major solution in the decarbonisation of transport.’

The journey from the shipyard in Romania to France is well underway. Via the Danube River, Zulu reached Budapest earlier this week. The vessel is expected in Le Havre in four weeks’ time. Zulu 06 will be operated by BLL – Blue line logistics, a subsidiary of the Sogestran Group. BLL will market urban logistics services from September 2022.