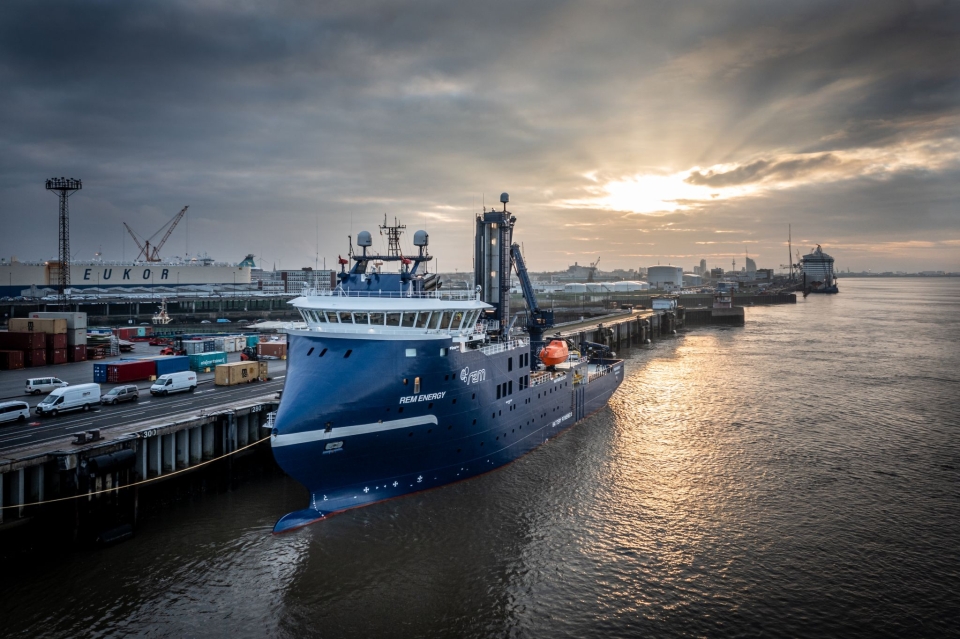 Siemens Gamesa’s new Service Operations Vessel (SOV) REM Energy is ready for the addition of a 12-MW battery, which would reduce energy consumption during operation. The SOV is also capable of running emissions free on green hydrogen or with batteries and offshore charging.

The REM Energy is almost 90 metres long and almost 20 metres wide. It will be the workplace and living quarters for up to 75 offshore service technicians and 24 crew members. The SOV will provide service and maintenance for in the offshore wind parks Global Tech I and Trianel Windpark Borkum I in the North Sea. The home port is Bremerhaven, Germany.

The ship was delivered from the Norwegian shipyard Green Yard Kleven on December 3 and was christened there in mid-November. Siemens Gamesa has chartered the REM Energy for four years, and it will be operated by the shipping company Rem Energy AS.

Until a green hydrogen economy is established in Germany, the ship will be conventionally powered by efficient diesel generators.

‘We are taking the first step in getting ready to cut our emissions in offshore service operations. The commissioning of the REM Energy is a strong signal highlighting the availability of clean technology to facilitate operation without emissions,’ says Jonas Pagh Jensen, Sustainability Specialist at Siemens Gamesa. ‘Governments, industry and investors now need to partner up quickly to ramp up a green hydrogen infrastructure to facilitate the decarbonisation of marine shipping.’

Shipping is a sector that is difficult to electrify. Green hydrogen and other power-to-X fuels produced with renewable energy are a key building block for reducing emissions.

Siemens Gamesa became carbon neutral in 2019 – five years ahead of schedule. In 2020, the company was powered by 100 per cent renewable energy and had the SBTi (Science Based Targets Initiative) verify that its emission reduction targets until 2025 are meeting the most ambitious 1.5°C scenario.

Thanks to its azimuth thrusters that can be rotated 360 degrees around the vertical axis, the ship is extremely manoeuvrable, enabling it to safely move between the wind turbines even in rough seas. The ship has a gangway that stabilises the wave movements and enables the technicians to safely transfer from the ship to the offshore wind turbine. To make the stay at sea as pleasant as possible, there is a fitness room, a cinema and a gaming room on board.

The offshore service technicians will live on board and work in shifts. The Siemens Gamesa crew will rotate every fourteen days, while the REM Energy itself is able to operate at sea for a total of more than a month before having to return to port again.