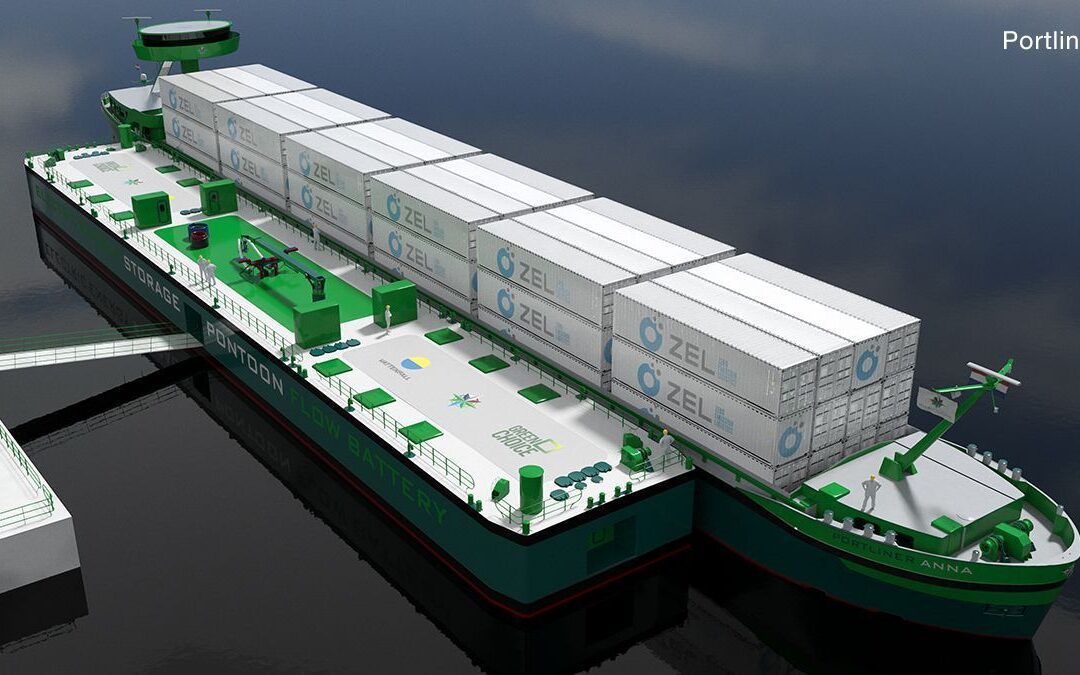 CellCube and Portliner, together with Werkina, will build a maritime flow battery solution for the all-electric propulsion of an inland vessel and a recharging pontoon. The goal is to demonstrate the feasibility of flow battery technology for decarbonising inland water transport.

In addition, the companies aim to show how flow batteries contribute to the energy transition of ports in building large-scale battery recharging infrastructure both onshore and waterborne.

The concept based VRFB technology (Vanadium redox-flow battery) will ensure integration of wind and solar power into the water transport’s energy mix, providing all-electric propulsion and putting an end to the use of conventional fossil fuels.

Flow battery technology is well developed and is said to offer a competitive and viable way forward towards decarbonisation of maritime operations. In Vanadium redox-flow batteries, electric energy is stored in a liquid electrolyte that is non-flammable and non-explosive and that can be stored under ambient conditions. When the electricity is consumed, the electrolyte can be recharged, alternatively, the depleted electrolyte is swapped with recharged electrolyte.

In the partnership CellCube, PortLiner and Werkina have developed an integral clean energy storage system for electric vessels, including a waterborne storage and recharging unit (pontoon). The vessel’s rated AC power is designed at a level of up to 1.5 MW, with energy capacity at 6.25 MWh. The first recharging pontoon is planned to be operated with up to 2 MW power and a capacity of up to 25 MWh.

This approach will allow for an all-electric radius of at least 350 kilometres. The waterborne recharging pontoons will be used for refuelling vessels with recharged electrolyte. In addition, the pontoons can act like a floating energy storage system and provide power and energy services for onshore applications such as backup power for critical infrastructure, port electrification or provision of grid services.

Vessel and pontoon to hit the water in 2022

CellCube and Portliner are excited to jointly offer a zero-emission technology solution to the maritime markets delivering the vessel and pontoon throughout 2022 for the first trip.