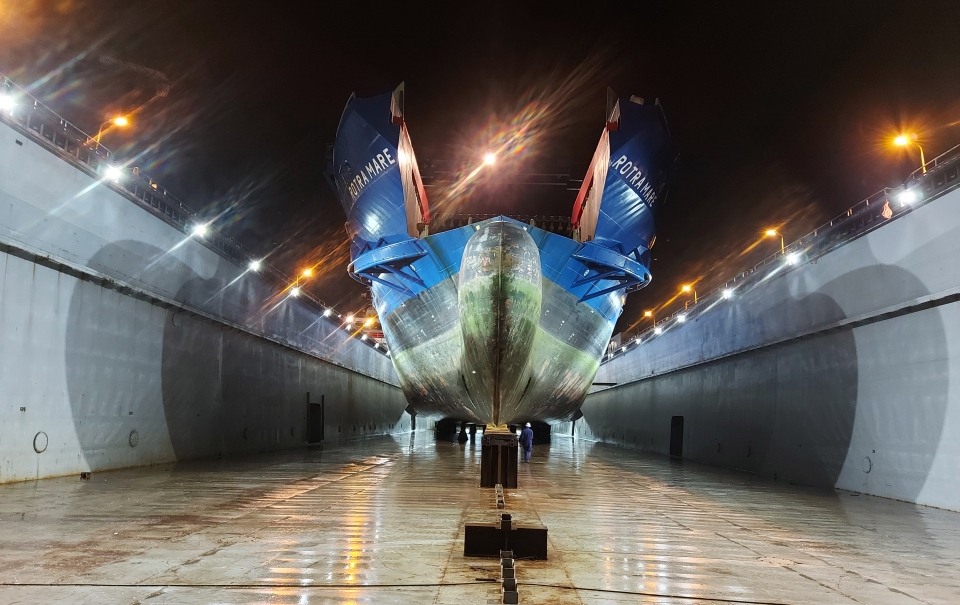 Due to the increasing height of wind turbines, transport vessels must be made suitable for the transport of these next generation wind turbines. Commissioned by Amasus Shipping, Holland Shipyards Group is currently working on the conversion of ro/ro Rotra Mare in collaboration with Niestern Sander.

The Rotra Mare of 141.6 by 20.6 metres will be extended to a vessel of 152.7 metres. Together with its sister vessel Rotra Vente, they already are the largest ships in terms of DWAT (a deadweight all told of 8888) in the Amasus fleet.

New section to be inserted

To construct the extension, Holland Shipyards is building a new section. The current vessel will be cut in half for this purpose. The bow will float out of the dry dock and the new section will be placed in between. This section will first be adapted to the aft ship in the dry dock, after which the dock will be lowered for the attachment of the foreship.

While the Rotra Mare is under construction, the Dutch shipyard is also working on the conversion of its sister vessel, the MV Rotra Vente. This conversion includes the installation of new sponsoons on both sides of the vessel to increase the deck width to 23.6 metres. The lifted bow will also be raised to load the next generation of wind turbines.

The Rotra Mare is expected to enter service again in January 2022, followed by the Rotra Vente in March 2022.

Earlier conversion of the vessels

Both the Rotra Mare and the Rotra Vente are familiar vessels to Holland Shipyards Group, as they were both converted from coasters to ro/ro vessels at the shipyard in 2016. Then, the cargo hatch covers were removed and instead a very solid, completely flush 2000 square metres main deck was created, with a maximum payload of 17.5 tonnes per square metre. The space below – the former cargo holds – became support structures, ballast tanks and void spaces.

The most visible modification to the vessels was done at the bow. The loading and unloading of the heavy components was to be done on wheels with self-propelled modular transporters, to create independence of crane infrastructure, to be more cost-effective and independent of wind conditions. The multi-wheeled vehicles can roll onto the main deck over a bow ramp, which extends towards the quay with a hydraulic system.